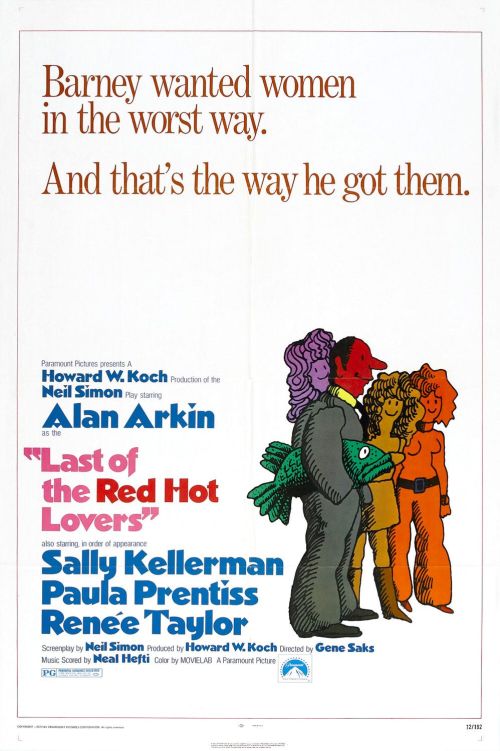 Barney (Alan Arkin) is a middle-aged man, who after 22-years of marriage, has decided he’d like to fool-around for the first time. He doesn’t want an actual affair, just a quickie sex fling with indiscriminate women while inside his elderly mother’s apartment, which he has access to during the day while she’s away. The problem is that while he’s able to get attractive women into the place he can’t quite get any action leaving him feeling more sexually frustrated than when it began.

The film is based on the Neil Simon play that opened on Broadway in 1969 and ran for 706 performances. The play starred James Coco in the pivotal role who I felt was much better suited for the part than Arkin. Arkin is okay, but his comedic style can be quite frantic in tone that can sometimes border on creepy. He also had a full head of hair at the time even though the role called for a balding man, so he shaved the top of his head to appear semi-bald, but it looks tacky. Coco on the other-hand had a lovable loser quality that made you want to like him even when he did naughty things and he was naturally bald, so his appearance wouldn’t have looked as fake as Arkin’s. I can only presume that because Arkin was at the time an established film star and Coco was still just considered a fledgling character actor that’s why he got the offer while Coco didn’t, but it’s one of the main reasons the story doesn’t translate as well on film as it did onstage.

The directing by Gene Saks isn’t bad particularly the opening sequence where we things entirely from the point-of-view of Barney as he wakes-up and gets out of bed and starts his daily routine, which I found rather inventive cinematically. In fact it’s these moments where we hear the thoughts going on inside Barney’s head as he tries to get the nerve to break-the-ice with other women that he meets, which are the funniest. Unfortunately the scenes done inside the apartment don’t work as well as the place is too cramped and appearing more like a jail cell, which becomes visually static.

The three rendezvous that Barney has with three different women aren’t as clever or creative as they could’ve been. The first segment has Sally Kellermen, who is excellent, playing an Italian women, who comes up to his place, but then just proceeds to argue with him before leaving. My main problem with this scene was the motivation as she spots Barney working inside his restaurant, which precipitates the meet-up, but why would this incredibly hot woman get turned-on by this dopey looking guy to the point that she’d want to have casual sex with him? There were plenty of other men in the place, so why does Barney excite her over the others? The conversation that the two have inside the restaurant is never shown, which I found to be a cop-out and hurt the character development. Had she been portrayed as being a prostitute then it would’ve made more sense, but this is never confirmed, which makes this whole first segment quite weak.

The second segment deals with Paula Prentis as a struggling actress who Barney meets in a park. She borrows some money from him and then agrees to pay him back later at the apartment. However, when she arrives she seems like a completely different person. At the park she came-off as quiet and shy, but at the apartment she’s a babbling idiot that seems to be on acid. The dialogue during this sequence in which the characters basically talk-over each other the whole time quickly becomes annoying. The scene fades-out with the two getting high off of marijuana, but it never shows her leaving the place, so we don’t know for sure if they ended-up having sex or not.

The third and final segment has Renee Taylor playing a middle-aged woman, who is also married, coming-up to Barney’s mother’s place, but immediately getting cold-feet, which kills the intrigue as we know right from the start how it’s going to go. This scene also has a rapey vibe to it as Barney, now feeling frustrated at having struck out twice before, behaves in a much more aggressive manner by blocking her from leaving and then while half-naked jumping on top of her and pinning her to the bed while she yells for him to get off, which is cringy and not funny.

Having a film deal with all the strike-outs a person may face when it comes to having sex with others is an interesting idea. Too many other movies just show the ones that work-out, but in reality, especially with average looking people, there can be more misses than hits, so I appreciated the story in that regard. However, random sex with strangers where the women goes to a strange man’s place without worry or concern has become a thing of the past in this day and age of stalkers and self-protection making the theme here quite dated and out-of-touch.