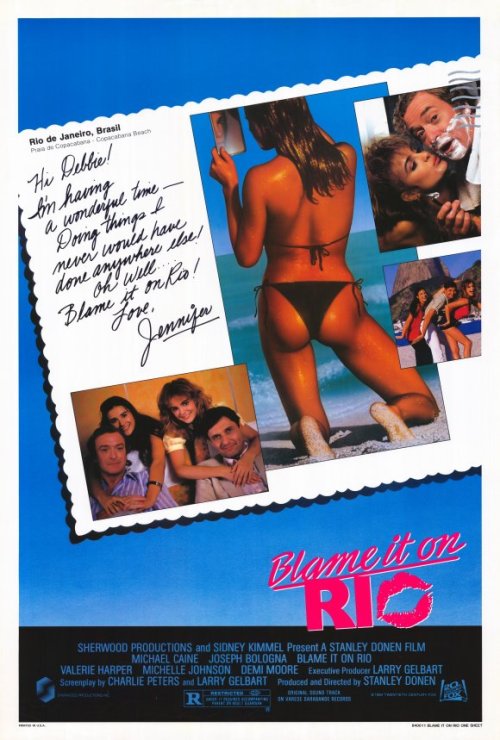 Victor (Joseph Bologna) is going through a messy divorce and in order to escape from the stress he invites his friend Matthew (Michael Caine) to join him and his daughter Jennifer (Michelle Johnson) on a trip to Rio de Janeiro. Initially Matthew was to bring along his wife Karen (Valerie Harper), but at the last minute she bails out, so instead he takes his daughter Nicole (Demi Moore) who is also Jennifer’s best friend. During the trip Jennifer’s long dormant feelings for Matthew come to a head and the two end up having a fling. Matthew sees this as a secret one-night-stand as he doesn’t want it to jeopardize his long friendship with Victor, but Jennifer wishes for it to blossom into a love affair and even considers, much to Matthew’s reluctance, informing her father about it.

The film, which has been the last theatrical feature to date to be directed by the legendary Stanley Donen, has a zesty start that features soothing music, luscious scenery and sharp dialogue. Unfortunately it goes downhill from there with the third act being the real problem. Instead of becoming an interesting character study and analyzing whether this otherwise strong friendship could survive such a shocking event it instead veers off into silliness by entering in a crazy twist of Mathew’s wife having a secret affair with Victor, which didn’t seem realistic or believable and cements the whole thing as being nothing more than a dumb, shallow lightweight comedy.

The usually reliable Caine is miscast and his big Harry Caray-like glasses become almost a distraction. His costar Bologna is the one who steals it in a role nicely attuned to his brash, hothead persona.

The weakest link though is Johnson who despite looking great topless clearly has very little acting talent. Her character is poorly defined and written by two middle-aged men who were out-of-touch with the younger generation and had no idea how they ticked.  At the beginning she behaves too much like a child and then suddenly when she gets it on with Matthew she is like an out-of-control sensuous vamp, which made the character come off like two different people altogether. The fact that she shows no apprehension at all in having sex with Matthew who is much older made little sense as I would think that any normal person  would feel nervous and despite the attraction even some reluctance. She also shows no concern for how stressed the whole thing made Matthew feel, which unintentionally made her appear quite selfish.

Moore would’ve been much better in Johnson’s role and in many ways sexier. I had to chuckle a bit because in Leonard Maltin’s review of this film he mentions that Demi seemed ‘intimidated’ during her topless scene at the beach, which is actually an understatement as she looks downright uncomfortable, which in turn makes the viewer feel the same way.

This film is the American remake of the French comedy One Wild Moment, which came out six years earlier and will be reviewed later this week. 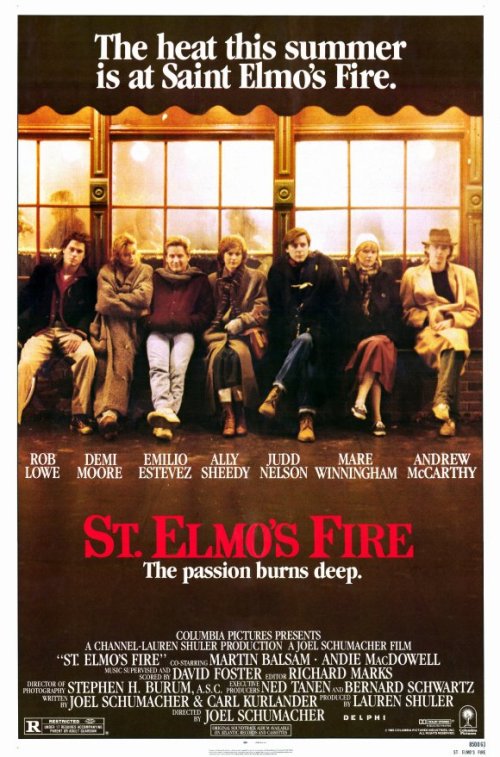 Seven friends from college start out on the rocky road of adulthood while learning to hold down full-time jobs and having long term relationships. Kirby (Emilio Estevez) is obsessed with an older woman (Andie MacDowell) who doesn’t reciprocate his same interest. Alec (Judd Nelson) wants to get married to Leslie (Ally Sheedy) despite the fact that he has already cheated on her with several other women. Wendy (Mare Winningham) is secretly in love with Billy (Rob Lowe) who is married to someone else and Kevin (Andrew McCarthy) has a secret crush on Leslie while Jules (Demi Moore) still seems to be in perpetual party mode.

I would’ve liked some explanation as to why there was a nude fat guy walking around in the opening scene at the hospital, but otherwise I felt the beginning was okay. The dialogue has a believable conversational quality and friends sticking together lends out a nice vibe although the scene where Alec dunks Billy’s head into a toilet after he loses his job would’ve ended that friendship for me quite quickly. The setting was supposed to be Georgetown University, but ended up being shot at the University of Maryland instead. I liked the tree lined streets and snazzy apartment neighborhoods, but was surprised how kids just out of college could afford such ritzy places.

The main fallback is the male characters that even for guys seem too full of extreme contradictions. Alec expects loyalty from his girlfriend Leslie even though he’s fooled around on her, but because somehow they were ‘meaningless’ to him then they should be overlooked. Billy is already married and has a kid, but shows no ability or interest in holding down a job and expects his wife to still ‘believe in him’ even though he hits on every woman in sight. Kevin expresses major cynicism towards marriage and relationships and then suddenly expounds on his ‘love’ for Leslie when he is alone with her like he is speaking straight out of a Harlequin romance novel.

The worst though is Kirby who shows definite signs of being a creepy stalker/psycho by chasing after a woman that clearly isn’t that in to him. He sniffs her pillows when alone in her apartment and disrupts one of her parties by barging into it dripping wet with rain and angered that he wasn’t invited. Then when she doesn’t show up to one of his parties he becomes enraged and travels all the way up to her remote mountaintop ski lodge and pounds on her door like he is ready to beat her senseless. What’s even more ridiculous is that she finds his behavior to be ‘flattering’ instead of scary making me wonder if she’s crazier than he is.

The women fare better. Winningham is a great nerdette and Sheedy allows for some genuine sympathy. I even liked Moore who does a fun caricature of an 80’s party girl and her scene inside a homeless shelter was interesting, but having her flip-out so severely and quickly after losing her job was, like with everything else, overdone.

The film’s musical score is the best thing while the drama is over-the-top and impossible to take seriously.