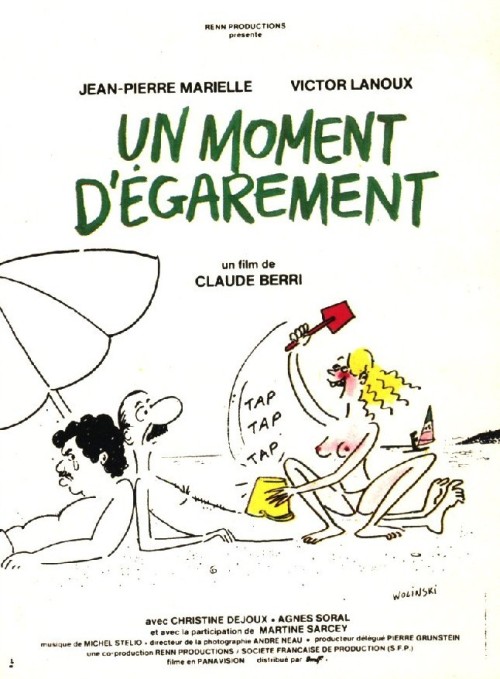 Pierre and Jacques (Jean-Pierre Marielle, Victor Lanoux) are longtime friends who decide to take a vacation together along the French Riviera and both bring along their 17-year-old daughters. One night Pierre and Victor’s daughter Francoise (Agnes Soral) attend a late night wedding party and the revelry and energy of the moment culminates with them having a tryst along the beach. Although Pierre has feelings for Francoise and vice-versa he wants to keep it from going any further for fear that it will jeopardize his friendship with Victor. Francoise though wants it to continue and the two quarrel with their mixed feelings as they ponder telling Victor about it.

Although this is not a great film it is still far superior to its American remake Blame it on Rio. For one thing it works more as a drama while the remake was played strictly for laughs. The dialogue has more of a realistic conversational quality and the characters are better rounded and more dimensional. The structure is  leisurely paced given it a day-in-the-life feel without having every scene forced to conform to contrived comedy like in the other one. The scene where the two make love has much more of a natural quality to it and less stagey. I also enjoyed more of an emphasis on subtly where the characters are not compelled to verbally describe their feelings, but instead it relies on their facial expressions, which is much more powerful.

Marielle gives a far better performance than Michael Caine did in the equivalent role who seemed awkward, stiff and uncomfortable throughout. The rift that the character has with his daughter Martine (Christine Dejoux) gets better fleshed out here while in the remake it is only briefly touched on. I also thought it was interesting that at one point Marielle’s character slaps his daughter during an argument when she comes back well after her curfew, which doesn’t get shown in the American film and I presume this is because of Hollywood’s concern that it might make the character less appealing as they always want to make their protagonists are wholly likable and politically correct, but in the process it also makes them less real.

The two daughters are much more believable and like young women ready to enter adulthood instead of a middle-aged man’s sexual fantasy like in the other one. I also found it amusing how when Francoise tells her father about her tryst he doesn’t immediately become upset about it like in the American film where sexual mores are more stringent, but only after she tells him it was with a man over 40.

Thankfully there is also no silly side-story involving one of the men’s wives having an affair with the other, which was the dumbest part about the remake and in fact there is no wife character here at all. The only real problem with this version is its abrupt ending that leaves open all sorts of loose endings and is quite unsatisfying and becomes unfortunately a major mark against it.