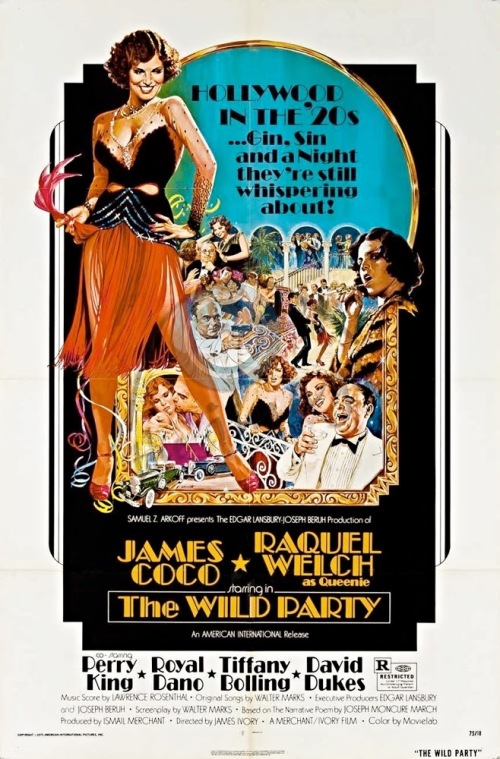 The year is 1929 and Jolly Grimm (James Coco) the once successful silent film star now finds himself, with the advent of talking pictures, to be in low demand. Although his movies once made a killing his style of humor is now considered cliched and with no studio willing to fund his latest pic he’s forced to use his own money to get it made. He holds a lavish party in his mansion inviting many Hollywood elites who he hopes will show an interest in his movie once he screens it to everyone, but instead his guests are more into each other as the party quickly devolves into a wild sex orgy with even Jolly’s faithful girlfriend Queenie (Raquel Welch) cheating on him with a much younger and better looking actor (Perry King).

The story is loosely based on the 1926 poem of the same name by Joseph Moncure March while the Jolly character was inspired by Fatty Arbuckle a famous silent film comic who was accused and the later acquitted of the rape and manslaughter of actress Virginia Rappe in 1921. The script though by Walter Marks doesn’t seem to know what tone it wants to take as at times it seems like a trenchant drama while at other moments it comes off as a surreal comedy. The original intent was to turn it into a musical, which would’ve been a better idea as the lack of cohesion causes the pacing to be completely off and never allows the film to build any tension or momentum.

The party scenes are not interesting or provocative and in many ways it’s a poorman’s version of Day of the Locust which came out at the same time and had a similar theme, but a far stronger impact. The sex is stagy and mechanical and seeing all the guests sprawled in a symmetric way on the floor the next day throughout the mansion looks too surreal-like to be even remotely believable. The party’s only interesting moment is when Jolly has a meltdown by going on a long angry rant that reveals his ugly side to his guests, but the filmmakers botch this sequence by focusing solely on Coco instead of cutting away to show the shocked reactions of the party-goers.

Coco, in his only starring vehicle, does quite well in a role I didn’t think he was equipped for. Welch gives an equally strong performance, possibly the best of her career, but the relationship of their two characters made no sense. Director James Ivory tries to flesh them out by having the two at different moments go on long soliloquys explaining what attracted them to the other, but in both cases it rings hollow. So what if Coco treated Welch with respect and asked her ‘deep questions’ when they first meet, which is apparently why she fell for him, he’s no longer doing that now, so why stick with him? Coco’s statement, that he couldn’t ‘live without her’ comes off as equally absurd since every time he talks to her he’s abusive.

The relationship angle should’ve been scrapped as it’s Jolly’s mental deterioration that is more interesting.  A far better and more realistic scenario would’ve had Coco coming onto a young starlet such as Queenie at the party but she would reject his advances and then later when he saw her with a younger actor it would set off his already shaky ego, which would then precipitate the violence.

The shooting that occurs at the end isn’t effective. The film is filled with so many lulls that by the time it finally gets to it you really don’t care who dies and who doesn’t. Having it occur the next morning after the party is already over seems anti-climactic and something that should’ve been witnessed by all the guests. It’s also a bit frustrating to have it end so abruptly without any aftermath or denouncement given.

Tiffany Bolling and Perry King add some zest in support especially with their facial expressions and the sultry dance done by Chris Gilmore (who gets billed here as Annette Ferra) adds a weird sensual vibe. However, having David Dukes’ character break the fourth wall and begin speaking directly to the camera as he describes the party guests is a distraction, which only  further cements this as a misguided misfire that needed better focus.

Posted in 70's Movies, Drama, Movies Based on Short Stories, Movies with Nudity

Based on the best-selling novel by Lawrence Sanders the story centers around Edward Delaney (Frank Sinatra) a cop only weeks away from retiring who becomes obsessed with tracking down a serial killer who hits people on the back of their heads with a sharp edge hammer as they are walking down the street. The problem is he has only a few clues to go on and his wife Barbara (Faye Dunaway) is in the hospital suffering from a mysterious illness that causes him additional stress and strain.

The film takes a refreshingly different approach to police work than what you will usually find in most Hollywood cop pictures. Instead of emphasizing exciting car chases and thrilling shoot-outs it instead analyzes the meticulous and often times tedious work that goes into following up every little lead while working inside a rigid system and under superiors that aren’t always supportive.  For the most part this is done quite well and at times it is even enlightening, but the whole first half is spent with Delaney trying to figure out what type of weapon was used in the killing even though we the viewer know what it is since we are shown the actual murder at the very beginning thus making the first hour seem quite derivative.

Having the film cut back and forth between scenes of Delaney and the killer doesn’t work. The psycho is played by David Dukes probably best known for playing the man who tries to rape Edith Bunker in a classic episode of ‘All in the Family’. He is a good actor, but scenes showing him alone are clichéd and at times even unintentionally funny. Director Brian G. Hutton should’ve cut them out completely as having the viewer come to realize who it is along with Delaney would have deepened the mystery angle and made it overall more intriguing.

The scenes with the sick wife don’t work either. For one thing we never find out what the mysterious illness is, which is highly frustrating and annoying. It also doesn’t make the plot or character any more interesting. Dunaway is a superior actress and she makes the most of the role’s limitations, but I felt an actress who was more Sinatra’s age would have made it more realistic instead of casting a woman who was 27 years younger.

I have always enjoyed Sinatra in his detective roles, but the character here isn’t as caustic as in some of his older films. For the most part he is pretty benign and even kind of boring. Joe Spinnell though makes the most of his bit part as an overzealous doorman who believes in rigidly following the rules and taking great pride in his doorman duties, but quickly willing to bend them the minute he is given some bribe money.

The final showdown between Delaney and the killer is quite unusual and much more low-key than you might expect. I enjoyed the twist that comes with it, but it lacks a strong impact and the film would have been better served had it had just a little more action.

This movie is also famous as being Bruce Willis’s film debut. He can be seen at the 1Hour 34Minute mark coming into a bar as Delaney walks out. He has a cap over his head and covering his eyes, but you can clearly see just by looking at his mouth that it is him.