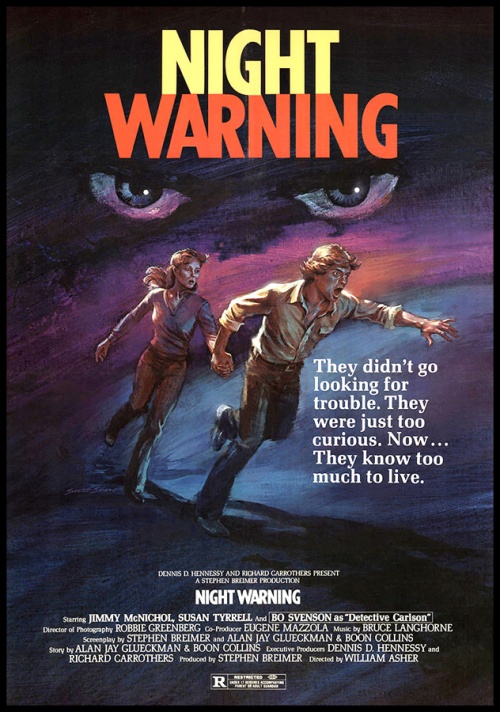 4-Word Review: His aunt is crazy.

Billy (Jimmy McNichol) has been orphaned since age 3 ever since his parents died in a tragic car accident. For the past 14 years he’s been living with his neurotic aunt Cheryl (Susan Tyrrell), but now that he’s turning 17 he’s ready to move-out. Cheryl though doesn’t want Billy to leave her as she harbors dark incestuous feelings for him and will do anything, even kill in order to keep him with her.

The film was directed by William Asher, who mainly worked on family oriented material like the TV-show ‘Bewitched’ and the beach party movies from the 60’s, so doing this was a stretch for him, but results aren’t bad. Although there’s little gore the well-shot opening sequence in which the father gets decapitated by driving into a truck hauling wooden logs is impressive and more than makes up for it and it even gets shown twice.

The big payoff though is Susan Tyrrell’s performance, which gets completely off-the-charts. She had a love-hate relationship with her real-life mother and the two spent many years not talking to each other and I think this as well as some of the treatment that she received in Hollywood particularly with her working relationship with director John Huston while doing Fat City she used to channel the anger and rejection of her character and it really works. Watching her become more and more unhinged as the film progresses and her increasingly odd facial expressions and voice tones is a treat onto itself and makes catching this otherwise hard-to-find flick worth it.

McNichol’s acting unfortunately cannot match hers and I was shocked to see that he got top billing over her as his talent level, pedigree isn’t even close. His character though is even more annoying as I found it hard to believe that he wouldn’t have seen red flags to his aunt’s mental illness far sooner. The film makes it seem that he had no concerns about his aunt until he turned 17, but I would think living with her for 14 years there would be signs of it earlier. It’s also hard to feel for someone who is so painfully naïve and walks into his aunt’s devious traps when anyone else would’ve know better. It’s dubious too that the aunt would wait until the kid was 17 before making sexual overtures, but I suppose that’s a whole other issue.

Bo Svenson’s as a brash, unethical cop who is profoundly racist and homophobic becomes a strain too. I’m sure at the time this was considered simply ‘soft satire’ that lightly pokes fun at the bad cop stigma, but now it comes off as dated and unpleasant and probably the whole reason why the film hasn’t received a DVD/Blu-ray release.

Julia Duffy, best known for playing Stephanie on the TV-show ‘Newhart’ is on hand in support and although she was already 30 at the time plays Billy’s teen girlfriend and even appears topless, which may interest the voyeurs. However, any story that hinges on one of the characters being put on trial and then found not guilty by a jury due to temporary insanity I just can’t buy into and I don’t think has ever happened at least not in this country. There’s also too much ‘scary music’ that gets played particularly during scenes inside the house that just isn’t needed and almost becomes a distraction and I wish directors and producers would realize that the quiet/natural ambience can be far creepier than any soundtrack. 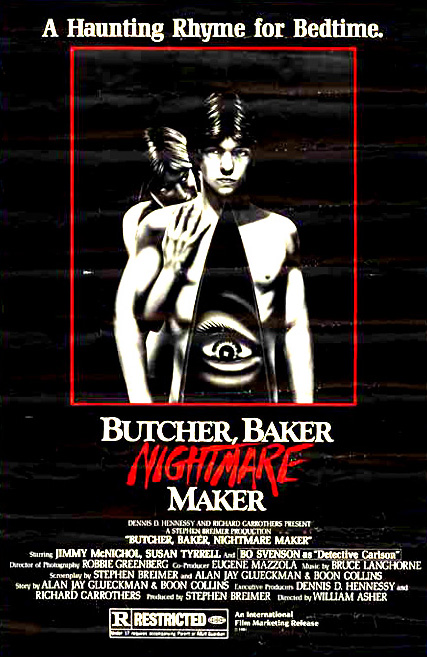 Jack Murdock (Bo Svenson) manages to pull off a daring bank robbery, but in an effort to elude the police he stashes the bag of money inside a mailbox and then waits for the late night mailman to open it up, so he can retrieve it. In the meantime he must deal with ditzy Mary Jane (Cybill Shepherd) who resides in an apartment just across the street from the mailbox and witnesses what Jack has done. She agrees to help him, but only if she can get a part of the take. They also must deal with a local bartender named Graff (Michael C. Gwynne) who is also aware of what Jack did and becomes determined to get at the cash before they do.

Although the film is labeled as a comedy it really isn’t. There are a few quirky conversations between Jack and Mary Jane, but it’s not much and most of the movie is quite gritty and tense. Watching the men trying to escape from the police by precariously climbing up the side of a building using nothing but a rope is realistically done and had me on the edge-of-my-seat. The scene where Mary Jane gets surrounded by a gang of bikers who try to rape her borders on being quite unpleasant and should’ve been excised as it adds nothing to the story, but in either case it solidifies this has being a hard-edged action flick that is anything but funny.

The plot is solid for the most part with my only complaint being that I’ve never seen, in any city that I’ve lived in, an outdoor mailbox with a late night mail pick-up of Midnight, or in this case 11:45 PM. Most mail boxes list 5 or 6 PM as the latest pick-up time and it would’ve worked better had it been earlier anyways as the darkness takes away a bit from the action. I also wanted the mailbox location to have been on an actual street corner and not a studio backlot as it would’ve given the film a more genuine atmosphere.

Svenson is amiable in the lead and seeing this really big, physical guy being so relatively soft-spoken creates a likable character. I also enjoyed the line he says to a group of bikers that he decides to single-handedly take on: “There’s one of me and only three of you.”

Shepherd is also quite good. I know I’ve bashed her in some of other film roles, but here her personality fits the part as she creates a kooky lady with a nice balance between being both eccentric and conniving.

The ending though is the one time that the film sells itself out as it features the two driving in a van that goes off a cliff and bursts into flames. The bad guys think Jack and Mary Jane were killed, but they managed to somehow escape it before it went over, but the film never shows us how this was done, which is a cop-out.

There is also a tacked-on twist that features the couple, having now successfully eluded both the bad guys and authorities, vacationing on a cruise ship where they catch the attention of two women, one of whom is the wife of the manager (Sorrell Booke) of the bank that Jack robbed. The women plot to make a play at Jack because they can tell from the outfit that Mary Jane is wearing that they are rich and therefore want to get at their money, but why reintroduce a character like the bank manager into the story when he was only seen briefly at the beginning and had very little to do with the main plot? And for that matter why should a wife of a bank manager plot to rob somebody else as she should be living an affluent lifestyle to begin with?

Overall I found this to be a surprisingly fun movie that enters in just enough offbeat ingredients to make it original, but keeps the action consistently coming, which should be enough to please those that like excitement.

Waldo Pepper (Robert Redford) makes a living traveling the Midwest during the 1920’s and giving rides on his biplane to the eager public of the small towns that he goes through as well as doing airplane stunts at aerial shows. He misses his years during WWI when he was a fighter pilot trying to take on the German flying ace Ernest Kessler (Bo Brundin). Later when Pepper is grounded and can no longer fly legally he gets a job as a stunt man in Hollywood. It is there that he meets Kessler who is now working as a consultant on a movie about his flying days and the two agree to relive their war battle by having a duel to the death in the skies.

The aerial footage is the film’s greatest asset and it is amazing particularly since the actors did all their own stunt work and without any type of protection. When we see actor Bo Svenson walk out onto the wing of the plane while in midair and even fall through it it’s all real and it makes you hold your breath. The scene where Redford flies his plane underneath another one in an attempt to save Susan Sarandon who has walked out onto the wing and then unable to come back is equally nerve-wracking.

The film’s biggest fault and probably the reason why this big budgeted picture became an unexpected box office flop is because its unable to retain the breezy fun loving atmosphere of Redford’s and Hill’s two earlier collaborations. The film starts out amusingly enough, but then becomes quite serious when it features two deaths. The first one is good because it is completely unexpected and hits home the fact that stunt flying can have a dangerous side, but then the film has another death occur just 10 minutes later and it’s far more gruesome and drawn out while sucking all the lightheartedness out, which it’s never able to recover from.

I’ve never been overly impressed with Redford as an actor. Sure he’s great looking and competent at times, but he always has too much of a laid back persona and unable to ever show any intensity even though he did manage to grow on me more as the film progressed. The supporting cast of Svenson, Philip Bruns and a young Susan Sarandon fare better and help keep the film afloat.

The third act where Waldo meets his idol only to find that the man isn’t quite as successful or exciting when he is on the ground as he was in the air is where the film gels as it makes some strong points about our culture’s need for hero worship and their climactic aerial duel is both thrilling and amusing.