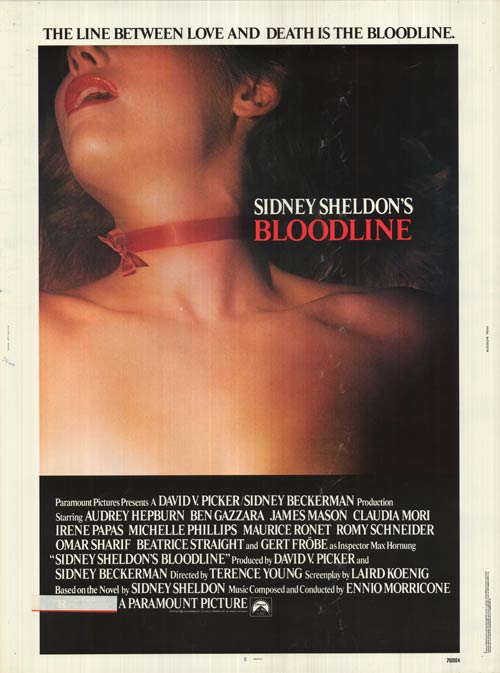 When her father dies under mysterious circumstances Elizabeth (Audrey Hepburn) is given full control of the company he founded, Roffe Pharmaceuticals, a billion dollar empire. Elizabeth soon learns that there’s a power struggle going on amongst the board members and when she refuses to allow the company’s stock to go public she finds that her life is now the target of a mysterious killer who stages ‘accidents’ to occur where ever she goes.

This film marked Hepburn’s last starring vehicle in a theatrical feature and if it weren’t for her presence this thing really wouldn’t be worth seeking out and barely is anyways. The story is based on the best-selling novel by Sidney Sheldon, but comes off more like a hackneyed whodunnit featuring many derivative elements that you’ve seen hundreds of times before in other mystery films that were better done.

Some of the more annoying aspects include the loud, overplayed orchestral score that would be better suited for a sappy romance. There are also segments dealing with Gert Frobe, who plays the lead investigator on Elizabeth’s father’s case, who does most of his detective work sitting in a lab and interacting with a computer whose over-the-top robotic voice turns the whole thing into unintentional camp. I also thought it was dumb that Elizabeth listens to a audio tape recorded by her father just before he died in which he states that he thinks he knows which board member is trying to kill him, but then doesn’t reveal his name, but wouldn’t it have been wise to state that on the tape, so if he ended up getting killed there would be recorded evidence to help the investigators nab the right person? The film also features a recreation of the backstory showing how the father founded the company, which is corny as hell as well as a kinky subplot dealing with snuff movies, something that was added into the script after production had already begun, but wasn’t needed.

The accidents, which should’ve been the film’s highlight become boring throwaways instead. Hepburn’s car crash, which occurs when the killer fiddles with the brakes, is poorly edited and the injuries that she sustains are too superficial, a few bruises and scratches on the side of her face that immediately go away the next day. Her close call in a rigged elevator gets equally botched. We see a split second visual of an elevator speeding down a shaft and only later told that it killed her best friend (Beatrice Straight) who was inside it, but Hepburn decided at the last minute to step out of it to get something that she forgot inside the office, but this is something that the viewers should’ve seen as movies are a visual art and not just explained by Hepburn afterwards.

The variety of exotic locations, which was shot throughout Europe, adds some zest and the eclectic cast is interesting although most are wasted. With that said I still found Romy Schneider, who plays a female race car driver, to own every scene she is in, which proves what a great actress she was as she’s able to make her part flashy despite the weak material. Omar Sharif is also fun as a henpecked husband who finds himself not only dominated by his demanding wife (Irene Papas) but his lady lover as well.

Ultimately though it’s too hokey to take seriously and offers no intrigue. Even Hepburn becomes a problem by playing a character who doesn’t make any sense. She tries to get Ben Gazzara to marry her by admitting it’s for convenience only and that he’d still have his ‘freedoms’ to do ‘other things’ on the side and she’d agree to look the other way. Then when they finally do get married and he meets some of his other lovers at a restaurant she becomes enraged and runs out. This causes him to call her a ‘neurotic bitch’ which given the circumstances I would have to agree with.