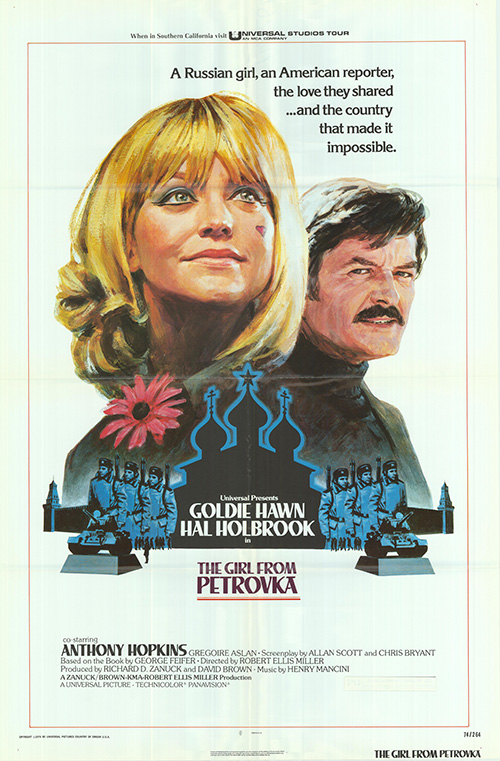 Oktabrina (Goldie Hawn) is a young Russian ballet dancer living in the country without proper documentation. Joe (Hal Holbrook) is an American journalist staying in Moscow as a foreign correspondent for the Chicago Herald. Joe becomes attracted to her youthful beauty while she likes the fact that compared to her impoverished lifestyle he has a lot of money and lives in an apartment that seems ‘like a palace’. The two begin going out, which attracts the attention of the KGB who raid her apartment while she’s not there. This forces her to stay at Joe’s for awhile and allows their relationship to blossom only to have a misunderstanding cause her to move out. Joe then tries desperately to win her back, but finds it may be too late as the authorities close in.

The film has a nice casual pace to it that’s more like a European movie and the on-location shooting, which was originally intended to be shot in Yugoslavia, but eventually done in Austria, nicely brings out the gray, dismal life in the Soviet Union at the time. I even enjoyed the snowy late night scene where Joe and a friend are seen walking outside with a visual of the Red Square matted in the backdrop.

Unfortunately the film’s romantic angle becomes its weakest point, which ultimately pulls the production down to a painfully boring level. I just couldn’t understand why these two fell in love so fast. I got the fact that Joe found her attractive, any man would, but that’s lust not love and Oktyabrina’s interest centered mainly on the fact that he had money, which is equally shallow and nothing that would create this deep emotional bond after only two days together. There’s also a huge age difference between the two, a full 19 years, which makes the romance come off looking even more absurd.

Hawn’s a great actress, and she does okay here even though I found the heart shaped tattoo that she has underneath her left eye to be annoying, but it still would’ve worked better had the part been played by an actual Russian woman who could’ve given the character more authenticity. Holbrook has proven to be a fine actor in many other productions, but here comes off as too detached and glib and adds very little life or emotion to the proceedings. Anthony Hopkins as Oktyabrina’s Russian friend shows more energy, and speaks with an excellent Russian accent to boot, and would’ve been a far better choice for the lead.

In typical 70’s fashion the ending is a downer, which was completely different from the one in the film’s source novel of the same name that was written by George Feifer, and only helps to cement this as a complete waste of efforts by all those involved. This was just one of the many bad movie choices that Goldie made during the 70’s that put her career on life support that managed to be revived in 1980 when she did Private Benjamin.