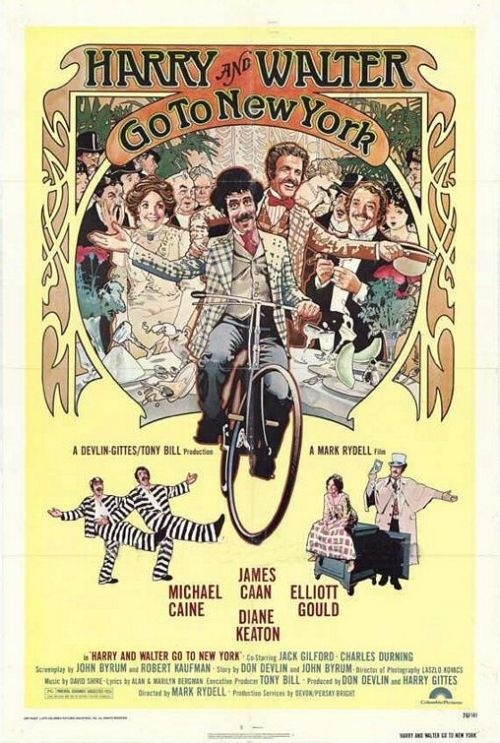 Harry and Walter (James Caan, Elliot Gould) are two down-on-their-luck marginally talented comedians living in the 1920’s who go to jail when they’re caught trying to rob their audience members during a tacky onstage ‘psychic’ stunt that goes horribly wrong. While in the slammer they meet up with Adam Worth (Michael Caine) a rich man from society’s upper crust who enjoys robbing banks just for the thrill of it. They come upon the blue print for his next proposed heist and take a picture of it and then after they escape from jail challenge Adam on who will be able to rob the bank first.

This is one of those 70’s movies that I found to be refreshingly original and quite funny, but when it was released it was met with harsh reviews and was a bomb at the box office. After some bad test audience reactions it was heavily cut much to director Mark Rydell’s dismay who felt a lot of the better jokes went missing although producer Tony Bill and star Caan blame Rydell for the film’s failure and insist that much of the humor in the original script was never even filmed or used.

I can’t explain why the film didn’t do well as I personally found as bank heist movies go this one to be quite  unique. So many bank robbing films from that era, and even today, paint the scheme in a one-dimensional way by portraying the robbers, who we are usually supposed to sympathize with, as a modern-day Robin Hood, while the cops and those out to stop them are represented as being the greedy,oppressive establishment, but this film takes things a step further, which is what I found interesting. The competition aspect gives it an extra.,likable edge and really made me want to root for Harry and Walter and their gang of losers who take on the arrogant Caine and his snotty buddies. Instead of the viewer just being intrigued at how they’re able to pull of the robbery as is the case with most heist films we are much more emotionally invested with its outcome.

Caan and Gould are what Warren Beatty and Dustin Hoffman should’ve been in Ishtar. These guys are definite losers, but still appealing and comical at the same time. Caan has never been known for his comedy and he has referred to this movie as ‘Harry and Walter Go to the Toilet’, which is a shame because he shows nice energy here and is able to keep Gould in check by not allowing him to drone on and steal the spotlight as he can sometimes do when left alone or with a less capable co-star.

If the film fails at all it’s by entering in too many supporting players. The title mentions only Harry and Walter and they should’ve pulled off the heist alone with maybe only Keaton tagging along for balance. As it is though a whole massive group gets in on it to the point that the two leads have little to do. While the group is busily trying to figure out how to open the safe Harry and Walter are on stage trying to extend a stage play  The film still works pretty well despite this issue, but technically the two men should be at the center of the action and in a lot of ways they really aren’t and in fact become almost like supporting players by the end.

The film also goes on too long with the denouncement being far more extended than it should, but it’s still a fun, breezy watch that reflects the gilded age flavor well and uses leftover sets from Hello Dolly to enhance the scenery perfectly.