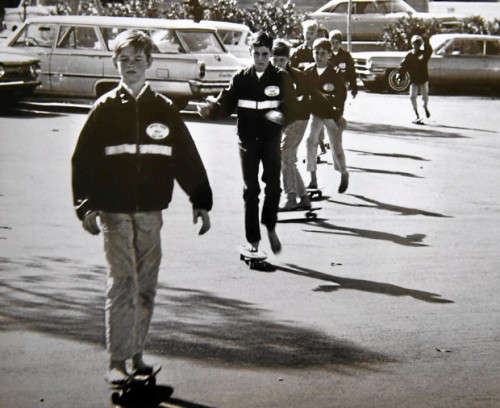 A still photo from the 1965 Academy Award-nominated short film “Skaterdater.” The 18-minute film was shot on location in the South Bay without dialog and starring a bunch of skateboarding kids.

4-Word Review: From skateboards to girls.

Director Noel Black, who had just graduated from USC film school, wanted to put together a production reel that he could show to potential producers and studios and  after securing $17,000 for financial backing decided to make a short movie examining the then new craze of skateboarding. The story centers on some neighborhood skateboarders in Torrance, California who enjoy spending their summer afternoons skating around town. One day one of the boys (Michael Mel) spots a pretty girl (Melissa Mallory) and decides she’s more interesting than his friends, so he starts spending all of his time with her, which makes his other friends jealous and one of them (Gregg Carroll) challenges him to a skateboarding ‘duel’ along a steep, hillside street.

Despite the limited production values this still comes off as fresh and original and it’s officially the very first film ever made about skateboarding. In many ways not much has changed. The only real difference is that businesses back them did not have the sway to put up signs banning skaters from using their parking lots or sidewalks and one amusing segment shows the disgruntled look of local business owners having to put up with the distracting skateboarding noise outside although unfortunately director Black over-accentuates the noise for effect making the sound and ultimately the segment annoying to the viewer as well.

Some of the stuntwork though is impressive and the fact that there is no dialogue or names given to the characters is a benefit as it gives the thing a universal appeal knowing that this same type of scenario gets repeated all over the country from one generation to the next. The film was met with strong critical praise and has led to it getting preserved into the Academy Film Archive in 2010 as well as helping to boost director Black’s filmmaking career, which directly  led to him getting a chance to direct Pretty Poison, starring Anthony Perkins and Tuesday Weld, which has since garnered a strong cult following.

As for the cast none of them became famous or found a career in front of the camera, but they’re all still alive and recently got together for a reunion with pics showing them as they were back then and how they look today : 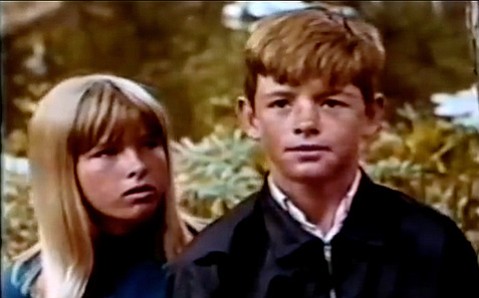