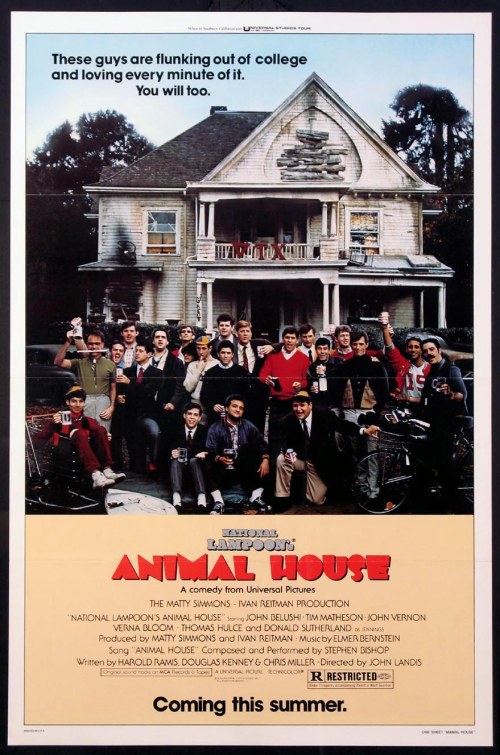 In 1962 the Dean of Faber College, Vernon Wormer, (John Vernon) wants to rid the campus of the Delta Fraternity as he considers their rundown house and partying ways to be a blight to the University. He works with the clean-cut Omega President (James Daughton) to establish a kangaroo court which has Delta’s charter revoked. The Delta members then seek revenge by creating havoc at the homecoming parade of which both Wormer and his wife Marion (Verna Bloom) are attending.

The film, which was a huge box office hit at the time of its release, succeeds by wisely balancing the farcical humor with a believable setting where many of the scenarios shown were based off of real-life experiences of the film’s writer Harold Ramis and producer Ivan Reitman during their own fraternity years. While the film does devolve at the end to being just a procession of slapstick gags it also manages to provide diverse characters and a genuine college atmosphere, which was filmed on-location at the University of Oregon.

The inspired casting helps especially John Belushi who mostly improvised his part. Although he’s best remembered for his pimple gag I actually laughed more when he cries out like he’s lost some prized possession after witnessing a crate of alcohol go crashing to the ground. His ability to chug an entire bottle of whiskey in one take is impressive and I liked how his character, as crude as he is, was able to convey a sympathetic side in his attempts to ‘cheer-up’ a despondent Flounder (Stephen Furst) after his car gets wrecked.

Tim Matheson is equally engaging as the cool and collected fraternity leader whose dry delivery doesn’t initially hit you as being funny until you go back and actually think about what he has just said. Kevin Bacon is hilarious in his film debut as a member of the snotty Omega Theta Pi who tries to quell a panicked crowd only to get quite literally flattened by them.

It’s also great seeing Verna Bloom, an actress relegated to mostly plain Jane roles, wearing a snazzy brunette wig and playing a sexually frustrated woman who has an amusingly drunken ad-libbed segment. Karen Allen is gorgeous as always playing a ‘good-girl’, but who isn’t afraid to flip someone the finger if she has to. You also get a nice glimpse of her bare ass as well as Donald Sutherland’s, apparently Allen only agreed to show hers if he bared his, and for the record Matheson’s crack gets exposed briefly too.

However, what I took away from this movie the most were the politically incorrect segments. The most extreme one is when Larry (Tom Hulce) contemplates having sex with Clorette (Sarah Holcomb) after she passes out drunk, which would be considered date rape now, but treated merely as throwaway bit here. Then in a later scene Larry tries to have sex with her again only for her divulge to him that she is just 13. Although the actress looks much older and was actually 19 when it was filmed it still gets implied that they went ahead and had sex anyways despite the character’s age issue.

I was alive when this film was released and although there was criticism pertaining to the film’s overall raunchiness these specific segments, which would create shockwaves now, were never brought up. Whether things are better now, or we’ve become too sensitive about stuff that was merely considered ‘tasteless’ back then is a whole other argument. Yet when they say things shown in the ‘70s could never be done now it’s all true, which makes watching this movie and others like it feel almost like you’ve slipped into a different universe.