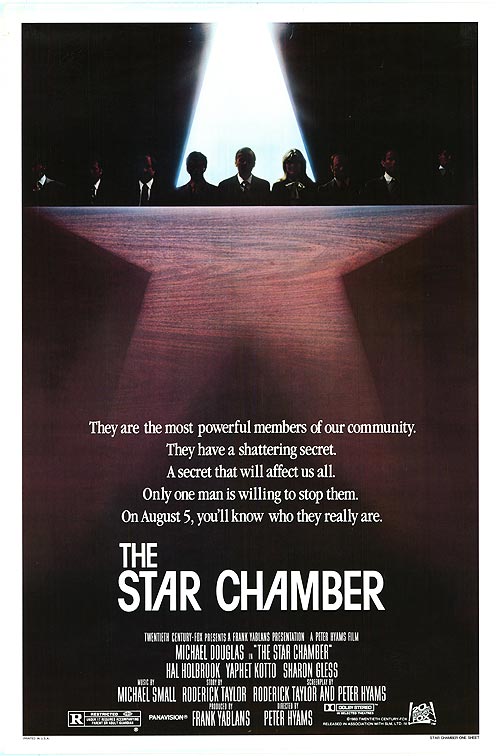 Idealistic young judge Steven Hardin (Michael Douglas) is sickened by the fact that so many known criminals are able to avoid jail time through legal technicalities. His friend and fellow judge Ben (Hal Holbrook) tells him of a secret underground group consisting of nine judges who have a hit-man sent out to kill the criminals who were otherwise able to get off through legal loopholes by the regular courts. Steven initially likes the idea and even sits in as one of the judges, but then he tries to stop a hit when it is later determined that the criminals set for vigilante execution were actually innocent, but finds to his horror that once the ball is set in motion there is no way it can be stopped.

The film is nicely directed by Peter Hyams who makes great use of mood lighting particularly in the scenes showing the nine judge tribunal as well as Steven’s visit to an abandoned warehouse. There is also a terrific foot chase at the beginning that is as exciting and intense as any car chase out there and it reminded me of a similar foot chase done in Busting, which was also helmed by Hyams.

The story by Roderick Taylor is an intriguing one, but it takes too long to get to the second act. The whole first hour is spent dwelling on Steven’s quandary of letting known criminals off-the-hook, which becomes quite derivative and could’ve easily been addressed in only 5 minutes. The story would’ve worked better had it started with Steven already involved in the underground organization and then through a brief flashback shown how he came to be there.

The scenes involving the vigilante tribunal are good, but I ended up having a lot of questions that never got answered or even touched on. For instance only one assassin (Keith Buckley) carries out all of the hits, but who is this guy and how did he come to work for them? Who’s the middle-man who gives him the assignments and how much does he know about the organization and what happens if he gets caught and starts talking to the police? How widespread is this movement and does it cover cases from the entire nation or only a certain area and are there other organizations like this one in other parts of the country and around the world?

I liked the wrinkle that gets thrown in, in which two criminals (Don Calfa, Joe Regalbuto) who Steven thinks are deserving of punishment, but later found to be innocent. Too many times Hollywood films dealing with this theme portray it in too much of a one-dimensional way that fails to bring out how vigilantism can sometimes be just as dangerous as the criminals it hopes to punish. Unfortunately the film fails to tackle the full complexity of the issue and instead just barely touches the surface.

The film also avoids making any clear statement or taking any position, which makes the whole thing come off as quite transparent when it’s over. The ending has no conclusion and leaves everything wide-open, which is a real cop-out. The concept is a good, but it needs to be redone by people who are willing to delve deeper as the effort here is too shallow to be considered satisfying.