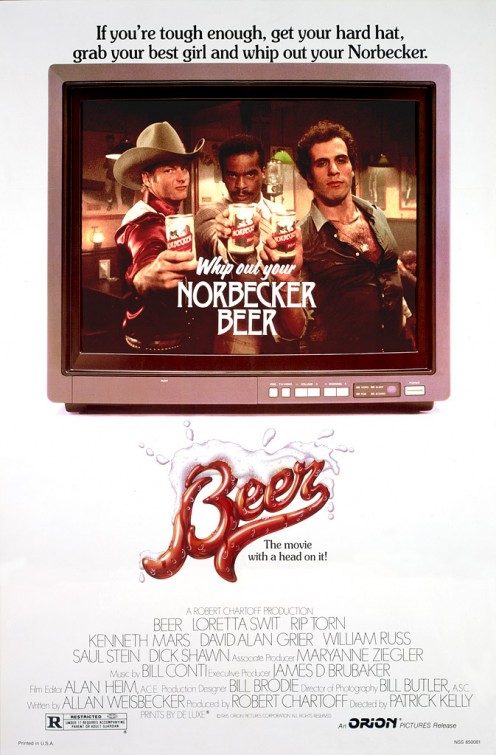 4-Word Review: This beer is flat.

An ad agency goes on the offense when their top client Norbecker beer (Kenneth Mars) threatens to pull their account. B.D. Tucker (Loretta Swit) is put in charge of introducing a new ad campaign that will excite viewers. After she witnesses three men (Elliot Morrison, William Russ, Saul Stein) subdue a gunman at a bar she decides to hire them to star in her new commercial were they’re portrayed as macho men and chick magnets, which causes controversy when female viewers find the ads to be sexist.

Normally I love satire and find it sad that there are so few satirical movies out there and yet it’s films like these that have single-handedly killed the genre. The attempt at mixing the acerbic wit of Network with the work place politics of How to Succeed at Business without Really Trying and then throwing them into the rapid-fire joke structure of Airplane doesn’t work and only succeeds at producing more groans than laughs. The tone is inconsistent with too many dumb gags thrown in for the sake of a cheap laugh that many times has nothing to do with the main theme. Taking satirical jabs at the advertising business is too easy and been done before while portraying the industry and the people who work in it in too much of a generic way. You’ll find a more realistic portrait of the business and on-target satire from a weak episode of ‘Bewitched’ than anything you’ll see here.

The three male leads lack pizazz and are incredibly bland and transparent. The film might’ve had a better chance of working had it cut the three characters down to just one, hired an actor who had some actual presence and then geared the story completely from his point-of-view, so the viewer like the protagonist could see the ugly side of advertising biz first-hand from an outsider’s perspective.

The supporting cast fails to help. Mars does a softer version of the caricature that he portrayed in The Producers, but here it fails to elicit even a small chuckle. Swit, who was nearing 50 at the time, looks great, but her performance lacks verve. Sandra Bernhard, who was initially cast in the role and then later fired, would’ve been a better choice for this type of material.

Dick Shawn’s attempt to emulate Phil Donahue doesn’t work as he fails to share any of Donahue’s same mannerisms although seeing him prance around on stage as he goes from one audience member to the next is worth a few chuckles. The scene though, which involves female audience members shouting their disproval of the beer commercials at the three men who starred in them, would’ve been stronger had it been Swit a fellow female that was onstage taking the women’s heat instead of the men.

The biggest transgression though is that after bombarding us with one silly comedic idea after another it then decides to suddenly at the end make a ‘serious statement’, which is utterly hackneyed. You can’t spend the majority of time being inane only to get ‘profound’ at the last minute, which makes this production seem even more amateurish and misguided than it already is.