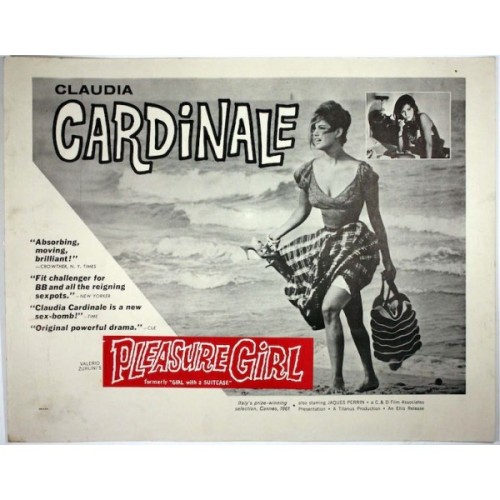 This movie will start off a week long theme of romance movies in celebration of Valentine’s Day, which will be on the 14th. One romance movie from each decade will be reviewed starting with this sleeper from Italy that is well worth seeking out.

The story is about Aida (Claudia Cardinale) a young woman who is abandoned at a gas station after having a fight with her boyfriend. When she eventually tracks him down at his house she finds that she is actually more attracted to his younger brother Lorenzo (Jacques Perrin). Although Aida is more worldly-wise and Lorenzo shy and sheltered the two slowly form a bond that becomes emotionally compelling.

This is one of those films that despite being made over 50 years ago is still amazingly fresh. The characters are believable and reveal different layers of themselves in interesting ways. Claudia has never looked more beautiful and her performance here may be her best. Perrin is also excellent and the viewer cannot help but emphasize with him. The film packs some very powerful scenes and imagery that stays with you long after it is over and it manages to do it in a natural way that never seems forced.

If I have one complaint it is the fact that it becomes bit protracted especially at the end. Shaving the runtime by 30 minutes would have helped and possibly even made it stronger. However, Valerio Zurini’s direction is still top-notch.

The film features two fascinatingly fractured characters that are played to the zenith by the two leads. This is a film that deserves way more attention. The script, direction, and black and white cinematography are superb.