Well-known movie director Jonathan Stryker (John Vernon) is producing a new film and aging actress Samantha Sherwood (Samantha Eggar) presumes she’ll get the starring role like with all of his other productions, but this time Stryker has a catch. He tells her that to prepare for the part she must commit herself to a mental institution to better understand the character she is to play. The desperate Samantha agrees, but then realizes Jonathan has no intention of getting her out once she is inside, so she escapes and seeks revenge at Jonathan’s secluded wintertime mansion where he is auditioning six younger actresses for the role. Now suddenly everyone starts dying off at the bloody hands of a masked assailant. Is the killer Samantha in disguise, or could it be one of the other actresses willing to kill in order to get the part?

The film starts out okay. I liked that we are shown a brief background to these actresses before they get to the mansion, which helps make them seem more like real people and less like caricatures. The mansion where the action takes place has an interesting exterior/interior and I loved the pristine winter time landscape, but that is pretty much where the good points end.

The narrative is horribly disjointed and most likely a result of a lot of rewrites and reshoots that had the production shelved for up to three years before it was finally released. The opening sequence done inside the asylum is clichéd to the extreme and makes the film come off as a complete campfeast. The idea that someone would intentional try to get themselves committed simply to get a movie role is stupid and overall there are no scares or frights at all. 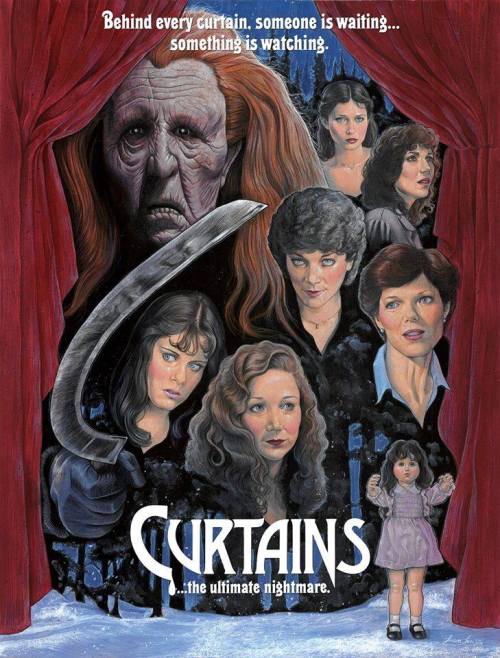 The killings are mechanical and unimaginative. I couldn’t understand how this killer was able to sneak up on people and literally magically appear at the most in opportune times. For instance a victim, played by Lesleh Donaldson, manages to escape the clutches of the bad guy and proceeds to make more distance between her and him by running through a snow capped forest. She briefly stops to catch her breath by a random tree and wouldn’t you know that’s the one tree that the killer is hiding behind.  Another segment has a victim (Anne Ditchburn) dancing by herself in a big empty room where the killer somehow sneaks up right behind her, which I would argue couldn’t happen. Everyone has a sense when someone else starts getting too close to them, especially in a room devoid of anyone else, and she would’ve detected the killer’s presence long before he got right behind her.

The ending in which the killer chases the final victim through an array of old stage props inside the mansion’s basement gets overly prolonged. The young women end up looking too much alike, so it was hard to have any empathy for them because they weren’t distinctive enough and the story would’ve worked better had it taken the concept of Dead of Winter where just one woman goes to the isolated place for the audition and thus allow the viewer to create more of a connection to the protagonist.

The only bright spot is Eggar. Her starring movie roles from the ‘60s and early ‘70s were now long gone and much like the actress she portrays was forced to take cheap low budget horror offers to remain busy, but she still gives it a 110% effort. What impressed me was how different her character was from any of her others. In those earlier films she was mainly a young, sensitive and idealistic woman, but here she is cold, conniving and bitter proving that she must be a great actress if she is able to play such opposite personalities in the same convincing way. It’s just unfortunate that the filmmakers didn’t share that same type of professionalism as the sloppy execution destroys any potential that it may have had.