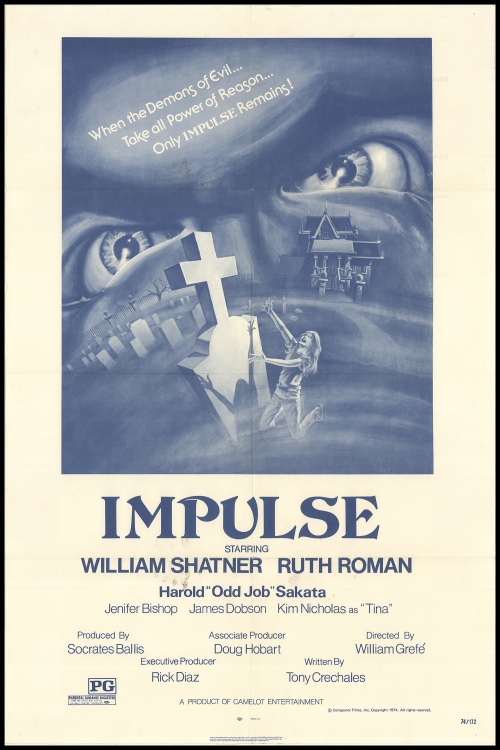 As a boy Matt Stone (William Shatner) witnesses a man trying to rape his mother (Vivian Lester) and that sight scars him psychologically. As an adult, when ‘triggered’, he goes into murderous rages. Young Tina (Kim Nicholas) watches him off a business associate of his named Karate Pete (Harold Sakata) and tries to warn her mother (Jennifer Bishop) about his dark tendencies, but she refuses to listen and begins forming a relationship with Matt. When Matt realizes that Tina is on to him he tries to kill her before she can tell anyone else.

Although this film has a reputation of dealing with child molestation, and had an original title of Want a Ride Little Girl?, there is no evidence of it. Matt only kills women who are above the age-of-consent and his dealings with Tina have no sexual overtures. The script is actually quite pedestrian and loaded with nothing but cardboard characters and contrived situations that fail to be either distinctive or memorable.

William Shatner’s acting is the only horrifying thing about it. His facial expressions are better suited for cheap camp and his loud, plaid leisure suits are enough to hurt your eyes along with a wig made for a storefront mannequin. You can also spot his real-life wife at the time, Marcy Lafferty, playing a hotel desk clerk.

Sakata’s appearance is another detriment. I could see why he wasn’t given any speaking lines in Goldfinger because every time he does open up his mouth he comes off like someone who has no business being in front of the camera. Ruth Roman, who was a star during the ‘40s, but took on token supporting roles during the ‘70s gives the middling material some effort, but only if you can get past her raspy, smoker’s voice.

The only good thing is Kim Nicholas, a young blonde child performer who acted in only 5 movies, but who outperforms her adult counterparts by a mile. She conveys her lines with solid conviction and has just the right facial reactions. You could almost say that she carries the movie, but there is one scene where she stands in the middle of the road so she can force any car that comes by to stop and then uses this chance to bum a ride of off them, but no child or adult in their right mind would do something so dangerous, which only proves how stupid and poorly conceived this pathetic thing is.