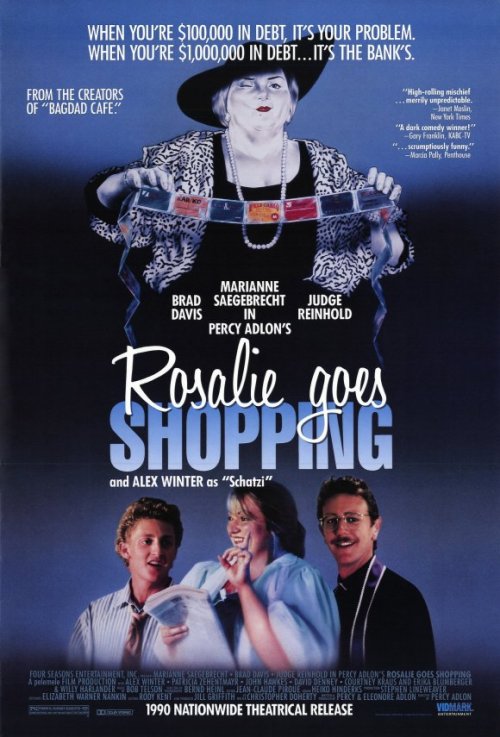 Rosalie (Marianne Sagebrecht) is a German immigrant who has married an American crop duster (Brad Davis) and moved onto a small ranch just outside of Stuttgart, Arkansas. There they raise a large family while also becoming obsessed with American consumerism by recording all the TV-shows on their VCR, but only so they can watch the commercials. Rosalie becomes a particularly obsessive shopper buying things that she really doesn’t need even when her money and credit become tapped out. She then figures out a way to hack into the accounts other people and companies via her home computer, which allows her to continue to pay for all her items by embezzling it from others.

This marks the fourth teaming of director Percy Adlon and star Sagebrecht and straight after their big success in the cult classic Bagdad Café. The film was made on-location in Arkansas, but financed by a German production company. I’m not sure what camera lens was used or the film stock, but the color contrast is quite unique and gives the whole thing an Avant-garde appearance. The storyline is original as well and veers off into unpredictable ways while making a great point, which is that unbridled capitalism can be just as dangerous and oppressive as any other form of government.

Sagebrecht is a delight and the moment where tears trickle down her checks as she becomes homesick for her native land while watching home movies taken in Germany is touching. Judge Reinhold is funny as the priest who becomes aware of Rosalie’s shenanigans through hearing them during confession, but completely exasperated about what to do about it. Brad Davis, a highly underrated actor who died too young, plays a rugged country man that’s completely against type from his more famous roles in the homoerotic films Midnight Express and Querelle.

Unfortunately the script, which was co-written by Adlon and his wife Eleonore veers too far into the whimsical and shows too much of a naiveté in regards to cyber technology. The idea that Rosalie could somehow ‘guess’ what everybody’s password was even those used by big companies and major banks is too farfetched and even if she did somehow figure them out all they’d have to do is change them once they realized their accounts had been hacked, which would’ve ended Rosalie’s cybercrimes right there.

The fact that she is able to cover up her crimes by doing even more outrageous ones and never, ever having to face the consequences of her actions is far too fanciful. It also makes light of a genuinely serious issue where the poor and lower middle-class do not have the same resources to get out of their financial predicaments as the rich do. They also do not have the convenience to magically cheat-the-system like the character here and those that do will almost always have it catch up with them where they will ultimately face harsh repercussions no matter how ‘justified’ they may have felt they were in doing it.

Some may argue that this was just a wish-fulfillment comedy, but even then there still needs to be some realm of possibility to it for it to be satisfying and this has none and it also makes the so-called clever twists lose their edge once you realize that none of it is plausible.