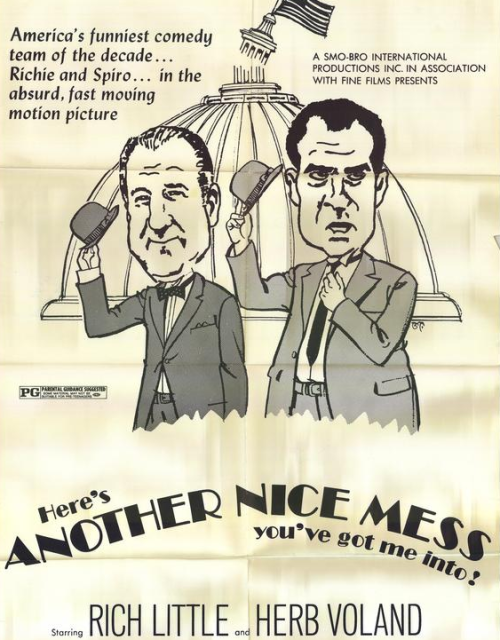 This film is an odd, misfired concoction from writer/director Bob Einstein (Albert Brooks’ older brother) who had just won an Emmy for his writing on ‘The Smothers Brothers Show’ and decided to try his creative muscle at filmmaking. The idea might’ve seemed clever at the time, but it has not aged well. The premise has President Richard Nixon (played by Rich Little) and Vice President Spiro Agnew (played by Herb Voland) behaving like Laurel and Hardy and spending the entire runtime going through some of that classic duo’s more famous routines.

If you were alive during Nixon’s administration than this may come off as being a bit funnier than to those who weren’t however, taking potshots at the President is no longer fresh and for the most part even a bit tiring to watch. The vaudeville-like routines are predictable and this thing had me bored two-minutes in and even with its brief running time still was a major drag to sit through.

Voland is much funnier than Little and seems to imitate the comic legend of Stan Laurel far better than Little does with Hardy, but the characters are played up to be completely moronic and having to watch them do and say one mind numbingly stupid thing after another becomes very one-dimensional.

The film Hail was a Nixon satire that came out around the same time, but that film fared much better and was even quite clever at times. The main reason was that they had a plot while this one is just a non-stop gag reel with a first-graders level of sophistication.

If there’s one redeeming quality for watching this it would be in seeing Steve Martin in his film debut playing a hippie. He doesn’t have his patented white hair here and instead it’s long, curly and brown. I probably wouldn’t have even recognized him if it weren’t for his voice and mannerisms.