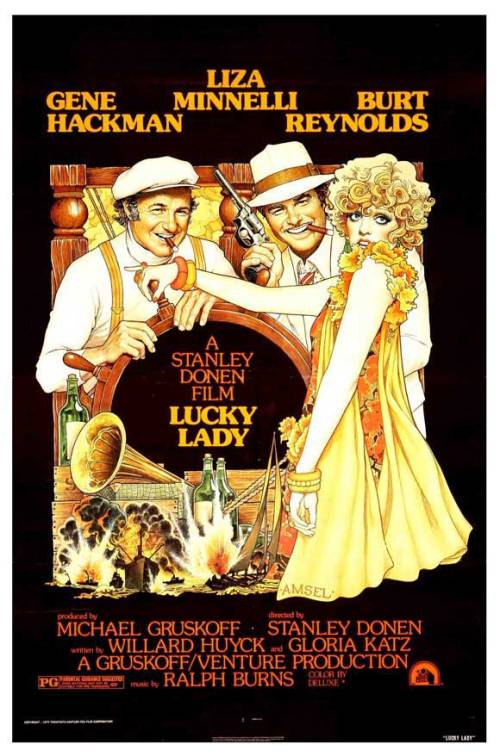 4-Word Review: Three’s not a crowd.

Walker (Burt Reynolds) and Claire (Liza Minnelli) make money by helping people illegally cross the Mexican border into the states, but when their third partner in the business dies and they almost get arrested they decide to get into an easier line of work. With the help of Kibby (Gene Hackman) they become rum-runners who transport liquor by boat under the cover of night during the prohibition era. As the three start to have some success and get to know each other they also form a love triangle and spend their evenings involved in a ménage-a-trois.

If you’re in the mood for non-think, grandiose style entertainment made in the same vein of classic movies from Hollywood’s golden era then you should find this more than satisfying. The plot moves along at a nice breezy pace with characters that are distinct and fun and full of snappy dialogue. The majority of the story takes place on water, but manages to remain quite exciting and ironically only becomes waterlogged when it goes on land. The lavish sets are splendid and the film could be enjoyed by simply taking in those alone.

The three leads are in top form and play against type. Minnelli, who actually looks sexy here in a flapper styled hairdo, is quite amusing with her acerbic one-liners. Reynolds is great as the klutzy member of the trio and Hackman is solid as always playing someone who seems meek at first, but eventually takes over things with his patented strong personality. Unfortunately John Hillerman, best known for playing Higgins in the ‘Magnum P.I.’ TV-series, is the only weak link of the cast playing a bad guy that never conveys enough menace to be truly threatening.

A young Robby Benson who was 18 at the time, but looks more like 14 is quite good in support. I was never all that impressed with the former teen heart throb, but here he is effective playing a shy kid who says little, but when he does say something it’s a gem. Geoffrey Lewis is also quite funny as an inept Captain of the Coast Guard. Mills Watson, who is best known for playing Deputy Perkins on the ‘The Misadventures of Sheriff Lobo’ TV-series can be spotted in a couple of scenes. IMDb does not have him listed here, but I recognized him and his name does come up on the closing credits as a character named Giff.

For lightweight entertainment the film does have quite a few action sequences that are surprisingly well choreographed and even quite bloody, but the climatic sequence becomes too cartoonish. I was also disappointed that the one unique element of the story, which is the three getting into a relationship, is only mildly touched upon and basically forgotten after the first hour. The film could’ve gone a lot farther with that and even made it the centerpiece of the plot, which would’ve helped make it more character driven and groundbreaking.