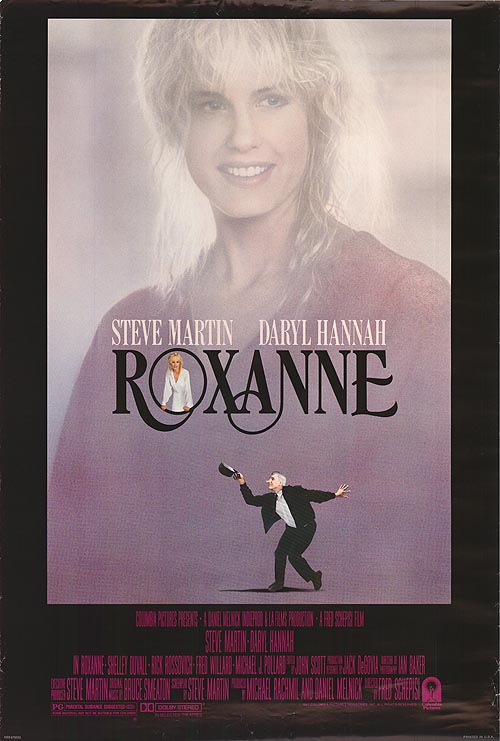 4-Word Review: His nose is big.

Charley (Steve Martin) runs the local fire department and just happens to have a really long nose, which at times causes him to be the butt of jokes. Roxanne (Daryl Hannah) is a beautiful student of astronomy who is spending the summer in the small town of Nelson studying a comet. Charley becomes smitten with her, but doesn’t dare ask her out due to his fear that she will reject him. Chris (Rick Rossovich) is the good looking guy who moves to the area and immediately catches Roxanne’s eye. The problem is that he is very shy with women, so Charley helps him out by writing letters to her while pretending that they were done by Chris, which captures Roxanne’s heart without her realizing that the man she is really in love with is Charley.

There have been many remakes old movies and in this case an old stage play named Cyrano De Begerac and for the most part they fail and only help to make the viewer long for the original, but this is the rare case where the updating of the story actually works. One of the main reasons is that it doesn’t try, in an effort to be ‘hip’, to go for the crude angle like a lot of modern remakes do and instead keeps it charming and breezy while having a main character with a sense of humor and not drowning in self-pity.

The on-location shooting, which was done in the small town of Nelson, British Columbia, helps as well. The hilly, green landscape gives the film a serene feeling and the quirky supporting characters seem very much like people you’d bump into when passing through one of these places. The humor is also top notch particularly the running gag involving the incompetent fire department.

Martin remains the film’s biggest selling point particularly the scene where he tries to use eye shadow to help darken his nose and make it less conspicuous or the moment when he lets a parakeet perch itself on it. His best part though comes when tries to come up with 20 insults to say to someone with a big nose.

Hannah is stunningly beautiful to the point of being breathtaking and fortunately this was years before she had her ill-advised plastic surgery, which now makes her looks far less appealing. Rossovich is also quite good and tends to be overlooked due to Martin’s presence, but manages to be quite funny as well especially the scene where he tries to meet Roxanne in person while having Charley telling him what to say through a radio transmitter.

Shelley Duvall, Michael J. Pollard and Fred Willard also deserve mention for their supporting work here and this marks the film debut for Kevin Nealon who appears in an early bit as a bully who tries to make fun of Charley’s nose, but learns the hard way that he shouldn’t.