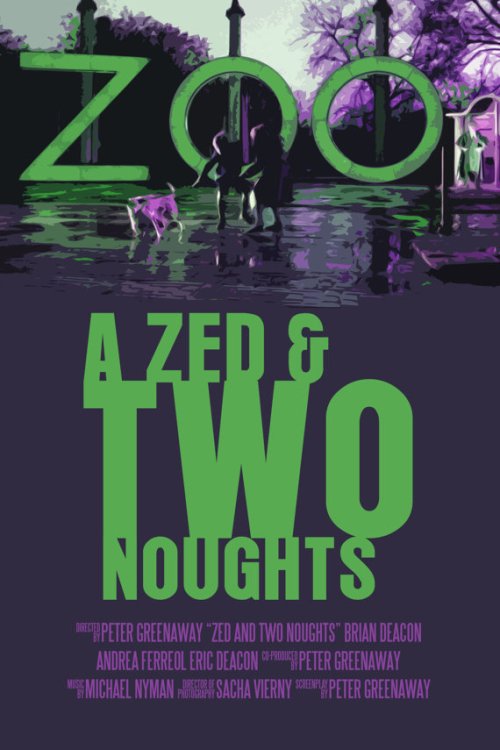 Oswald and Oliver (Brian and Eric Deacon) are twin brothers working at a zoo who become devastated to learn that both of their wives have died in the same freak accident in a car driven by Alba (Andrea Ferreol) who survives, but without her leg. Initially the brothers’ are angered with her, but this slowly grows into a strange attraction, which eventually forms into a ménage a trois. To help with their grief they begin doing time-lapse photography of the decaying process. They start with dead animals before deciding on a human subject with Alba as their chosen ‘star’.

From a completely visual level this film can be considered a great success. This was the first of ten projects that Director Peter Greenaway and cinematographer Sacha Vierny collaborated on and the result is stunning. The vivid contrasting colors, lighting and symmetrically designed sets make each and every shot look like its own painting. This is also one of the few films that completely transcend its era. Usually one can tell what decade a movie is from by watching it for only a few minutes, but this film is unlike any other ‘80s movie made, which is an achievement unto itself.

The best part of the movie is its depiction of the real-life decaying process captured in time-lapse form. I realize this may sound extremely morbid and ‘sick’, but it’s a natural process of the world we live in and if taken from a purely scientific perspective quite an interesting and fascinating phenomenon to watch. It gives the film a unique one-of-a-kind edge and something I wished had been shown even more.

The film’s drawbacks are the characters that come off as too weird and twisted, which is an issue in a lot of Greenaway’s movies that are always technically brilliant, but lacking in emotion or empathy. A good movie, no matter how ‘artistic’ it may be still needs relatable characters to help propel it and instead this movie has what amounts to mouth pieces in disguise as people who are simply used to relay a concept, but in no way connected to anyone you’d ever meet in real life. This results in leaving the viewer cold and making the film more of an ‘Avant-garde experiment’ than an actual story.