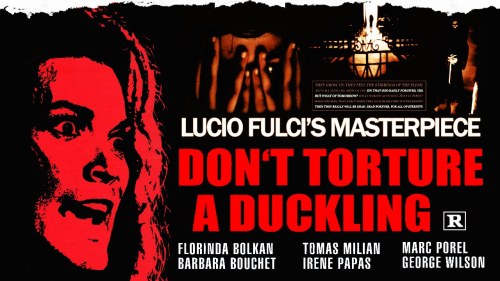 The setting in this Italian giallo is a small, rural village where the children of the townspeople are being murdered. At first the police suspect and arrest a mentally handicapped man (Vito Passeri), but the killings continue. Soon even more suspects turn up including Maciara (Florinda Bolkan) the mother of a dead child herself who secretly practices voodoo using dolls made by her father and yet every time the authorities believe they’ve found the culprit more clues arise that leads them to someone else creating panic in a town already steeped in fear, suspicion and the superstitious.

As a story detailing a police investigation it’s not too bad. The plot works in a linear fashion that’s easy to follow without entering in too many subplots or red herrings although it’s still no better than your average episode of ‘Murder She Wrote’. I did enjoy the rural Italian landscape and the bird’s eye shot of the village whose decrepit, rundown buildings visually hit home the stifled, bleak nature of the residents and why they would turn so heavily to the spiritual world as their sole escape.

Balkan’s performance as the nutty lady is effective particularly when she has a seizure during her interrogation and the scene where she gets surrounded by men who belt her with chains is quite graphic and realistic.

The film though, like with a lot of Italian productions from that era, does have dubbing issues particularly director Lucio Fulci’s use of adding in all the sound effects giving it a certain over-the-top cartoon quality. For instance when a victim is being slapped by a man’s hand it sounds more like the lashing of a whip and even simple stuff like the shoveling of dirt comes off wrong because the sound effect is not in sync with the action on the screen.

The film also has a uncomfortable moment where an adult character (Barbara Bouchet), who is one of the protagonists, walks around naked in front of a 12-year-old boy and even asks him how many women ‘he’s done it with’.

Guessing who the real killer is was easy and I had the whole thing figured out after about 30 minutes making the rest of the mystery predictable and boring. The idea of a priest killing children might’ve been considered shocking at the time, but now as with Fulci’s criticism of the Catholic Church it comes off as heavy-handed and redundant.

The close-up, slow motion shot of the priest falling down a cliff at the end is the film’s most controversial moment as it is clearly a dummy whose blank eyes and unnaturally agape mouth looks incredibly fake. Some have argued that this was Fulci’s attempt at revealing the ‘inner ugliness’ of the character by showing something with such a distorted face, but since a similar looking mannequin is also used to portray one of the boy victim’s submerged in a tub of water earlier I think it can safely be said that it was more just the cheapness of the production than anything else.