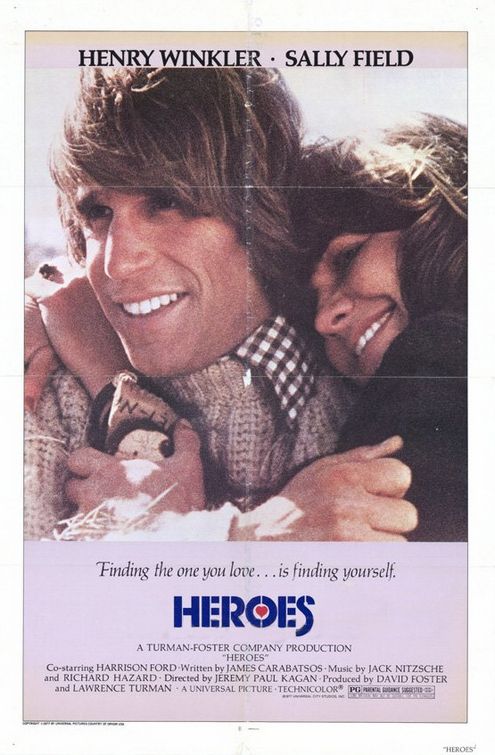 Jack (Henry Winkler) is a Vietnam Vet. still suffering from nightmares from his war time experiences. He has been in and out of the psyche ward at the veteran’s hospital, but has come up with an idea that he feels will makes both him and his buddies a lot of money. He wants to start a worm farm to be used as fisherman’s bait, but must board a bus to California to do. There he meets Carol (Sally Field) a woman who is engaged to be married and was a war protester during the 60’s. The two don’t get along at first, but eventually a relationship is made as she and his cousin Ken (Harrison Ford) help Jack fulfill his dream.

The movie is well filmed for the most part and even has a nicely shot and exciting foot chase down the busy streets of Manhattan, but the script by James Carabatsos, who was a Vietnam Vet. himself is too loosely structured and only glosses over the many issues that veterans face, which gives the whole thing a very shallow feeling. The only time we ever see any type of flashback’s to the experiences that Jack had while fighting in the war is at the end even though I felt the film would’ve been much stronger had this been shown throughout. The comical segments are misplaced and the story would’ve worked better had it just stuck to the drama.

The film also spends too much time with Jack and Carol’s budding romance, which for the most part comes off as forced. The cutesy ways that the two are shown constantly bumping into each other as their relationship ‘blossoms’ is contrived and having the two already as a boyfriend/girlfriend from the very start would’ve helped focus things more solely on Jack, which it doesn’t do enough of. I also felt that the segment where Carol pays for damages that Jack does at a café and then goes with him and his buddy Ken to an isolated location where she is promised to get paid back for it didn’t seem realistic. I realize this was the ‘70s where people were more relaxed about meeting strangers, but it still seemed dangerous and impractical for a lonely woman to be driving off with two men she had only met and were already acting peculiar to begin with.  A normal person would’ve simply sued him in small claims court to get back the money that they felt was owed.

Winkler does a terrific job in the lead and I felt it was a shame he hadn’t pursued his film career further instead of languishing away in television. Field is good as well as is Ford playing against type as a country hick. Character actor Stuart Margolin has a fun bit as a driver who picks the two up as they are hitchhiking and Val Avery is amusing as the bus driver who becomes increasingly annoyed at Jack’s antics.

The film has its share of pleasing moments, but on the whole it’s shallow and forgettable. There have been so many other better films on the subject that this one seems barley worth even mentioning.