Who is Harry Kellerman and Why Is He Saying Those Terrible Things About Me? (1971)

Georgie Soloway (Dustin Hoffman) is a successful songwriter who has written dozens of chart topping songs for different bands and yet feels alone and guilt ridden. He lives in his swanky Manhattan penthouse feeling paranoid after a man by the name of Harry Kellerman starts calling his friends and saying malicious things about him, which risks jeopardizing his career and reputation. He tells his problems to his psychiatrist (Jack Warden) while also searching for Kellerman, but makes no headway.

Story-wise the film is a misfire as Herb Gardner’s script has no discernable plot and a main character that doesn’t grow or evolve. Even if taken as a collection of vignettes it doesn’t work and it becomes more like a pointless one-man soliloquy instead. The final revelation of the mysterious Kellerman is not all that surprising or worth sitting through. Why the filmmakers thought viewers would be interested in watching a man essentially self-destruct for two hours is a mystery and it is as boring as it sounds. Besides it is hard for the average person to feel sorry for someone who seems to have it all and loaded with money and thus makes the character’s problems and issues seem quite minute and his perpetual whining overly monotonous.

The only thing that saves it is Ulu Grosbard’s creative direction. I enjoyed some of the surreal elements particularly those done during his sessions with his psychiatrist as well as a scene showing Georgie running through a long lighted tunnel that seems to have no end. The final segment done on a single-jet airplane is captivating especially as it flies through the clouds and watching two skiers’ glide through the snow from a bird’s-eye perspective has an equally mesmerizing effect. I also loved the way the film captures the New York skyline during a visual taken from the plane as it swoops over the city and a scene done in the early morning hours in downtown Manhattan without seemingly a single car driving on the street gives off a strangely unique feeling.

Barbara Harris, who doesn’t come on until the second half, is a scene stealer as an insecure actress who bombs at her audition, but then refuses to leave the stage. It was good enough to get her nominated for the Academy Award that year, but she lost out to Cloris Leachman and as much as I love Cloris Barb really should have won it as she is the one thing the enlivens this otherwise flat film and had her character been in it more this would have been a far better movie. David Burns, who died from a sudden heart attack while performing in a play three months before this film’s release, is touching as Georgie’s father.

Grosbard and Hoffman teamed up again seven years later for Straight Time, which is far superior and more worth your time to watch. 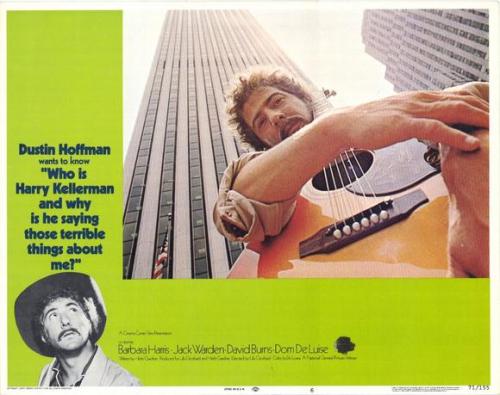