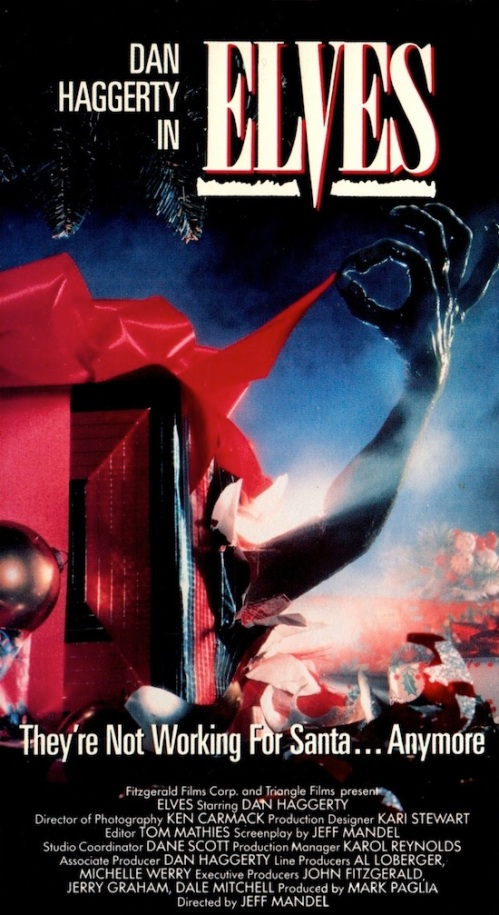 Kirsten (Julie Austin) feels Christmas has become too commercialized and dreads the season only to find out something that will make her hate it even worse as her evil Grandfather (Borah Silver) who has Nazi ties has apparently selected her to breed with an elf in order to create a superior human race. Now she must work with Mike McGavin (Dan Haggerty) an out of work department store Santa to not only evade her grandfather and his men, but also the elf that now runs wild.

Despite the title there is actually only one elf and it’s not a very good looking one at that. Not only does his appearance resemble the character in Troll, but you never actually get to see an entire body shot of him. You will only see close-up shots from the chest up or close-ups of his tiny feet or hands that look to be that of a puppets. This was most likely because they didn’t have the budget or talent to create a full body suit for someone to wear, but the effect lessens the horror, which isn’t too high to begin with. His hands are so tiny that it would have been impossible for him to shoot a gun let alone hold one, which he does do in one scene anyways, and it also gave me the belief that with his small stature he couldn’t have been that threatening and one could’ve easily just have kicked him away and been done with it.

Haggerty, who most will remember from the 70’s TV-series Life and Times of Grizzly Adams actually does pretty good in an otherwise thankless part. I almost felt that if he would just do away with his trademark mountain man look more parts might open up for him and he wouldn’t be subjugated to having to do this crap, but in any event his presence is the only reason I’m giving this 1 point instead of 0. The rest of the cast flunks including the bad guys with their fake sounding German accents and the bland females with the only exception being Deanna Lund as the hateful mother who has a nude scene, which isn’t bad.

The story is farfetched, convoluted and ultimately boring. The special effects are unimpressive and the action poorly paced leaving way for long intervals where nothing seems to happen. It looks like it was shot on video and then transferred to film, which only accentuates its cheap production values. Outside of a pretty good bathtub death and a shot of an elf fetus inside the womb this film as little to offer or recommend and should not be put on anyone’s Christmas list unless they’ve been really, really bad.