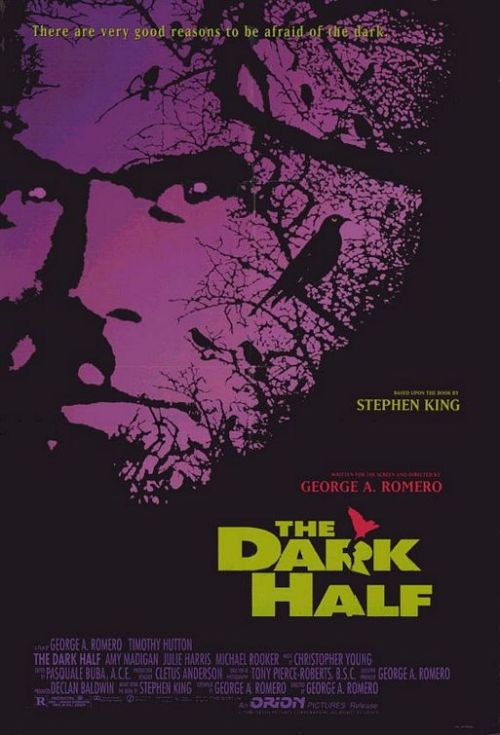 Thad Beaumont (Timothy Hutton) is a novelist who writes under the pen name of George Stark, but then decides to do away with it. Unfortunately this pen name slowly starts to take on a life and identity of its own. When George is ‘killed’ he becomes angry and starts to seek revenge.

Some of the things that I liked about the movie were the theme, which is interesting because it examines the idea that we are all two people. The one we want people to know and the other we repress. It also gives a thoughtful look at just how difficult writing a book can be. The climactic sequence is one of the most unique ‘showdowns’ you will ever see as both our hero and his dark half sit down across from each other to write a book of their own and the first one to finish lives while the other will die. There is also a nice creepy little nightmare segment.

However, there are a lot of things that don’t work in this movie and the majority of it looks like reprocessed stuff you’ve seen before. For one thing the musical score that gets overplayed. It’s like we are back in the silent film era and need it played in every segment just to keep the film going. The use of the sparrows as some symbolic reference seems awkward. They are not scary even when shown in flocks and having to see a shot of them flying around every other scene becomes annoying and redundant. The basic premise itself has potential, but gets stretched too far.

Hutton was not a good choice for this. He doesn’t display enough fear or emotion with the scenario. He approaches everything like a properly trained student of drama instead of as a method actor and playing the character’s dark half isn’t much better. He is supposed to be a creepy southern guy, but instead comes off as a bad, campy version of Elvis. The make-up effects never look realistic. It’s also irritating how these super smart, super clever bad guys always get so gosh darn dumb at all the right moments.

Amy Madigan makes a good non-glamorous wife, but accomplished actress Julie Harris is pretty much wasted although she does get the film’s best line.

Overall this is an offbeat idea that is given routine treatment. Having George Romero as the director doesn’t seem to add anything and he certainly has been slumming for quite a while.

Posted in 90's Movies, Horror, Movies Based on Novels, Psychological