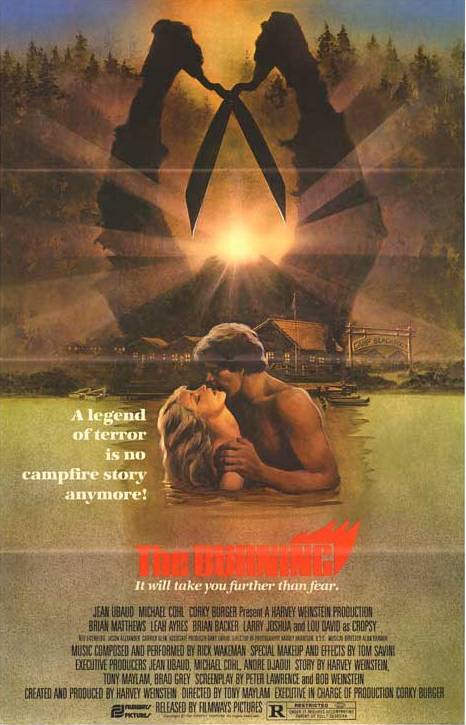 A summer camp caretaker named Cropsy (Lou David) is badly burned during a practical joke gone horribly wrong. Five years later and disfigured he gets out of the hospital and goes on a murderous rampage using a pair of gardening shears. However, he kills young campers at a completely different campsite and who had nothing to do with his accident.

Jason Alexander, in his film debut, is great. He shows a lot of charisma and pretty much carries the movie. You not only get to see him with a full head of hair, but for the lady viewers you also see his bare behind along with Fisher Stevens’s. This is also Holly Hunter’s first film, but she is seen very little. The teen characters here look like real teenagers instead of college- aged young adults like in most of the other films in this genre. They also have a little more distinctive personalities and aren’t quite as cardboard as usual. The women are good looking and there is a gratuitous nude scene involving actress/model Carole Houlihan.

On the Blue Underground DVD version make-up artist Tom Savini hosts a bonus feature, but warns everyone at the start not to watch it until they have seen the film so as not to ‘spoil’ it for them. However, it is hard to figure out what exactly it is that he would be spoiling as the movie is routine to the extreme. There are absolutely no interesting plot twists or surprises. It is also hard to believe that anyone could get a pair of simple gardening shears to do the things this killer gets them to do. The only really scary scene in this film is at the beginning where you get to see a close-up of actor Lou David’s strangely shaped nose. The camera slowly zooms into him as he is sleeping and you feel almost like you are being driven into his extremely large nostrils that seem to get bigger and bigger.

Savini’s special effects really don’t seem all that impressive especially in this day and age. There is a scene on the infamous raft killing sequence where it is quite obvious that the neck that the shears are cutting through is plastic and not really that of the actor’s. Also during the opening sequence when Cropsy runs out of the cabin while on fire he is not wearing anything on top of his head yet when the camera cuts to an outdoor shot of him it is obvious that the stunt double has something on his head.

I found this to be as bad and as uninspired as all the other Friday the 13th rip-offs. This is good only as a curio at seeing Alexander, Stevens and Hunter in their film debuts.