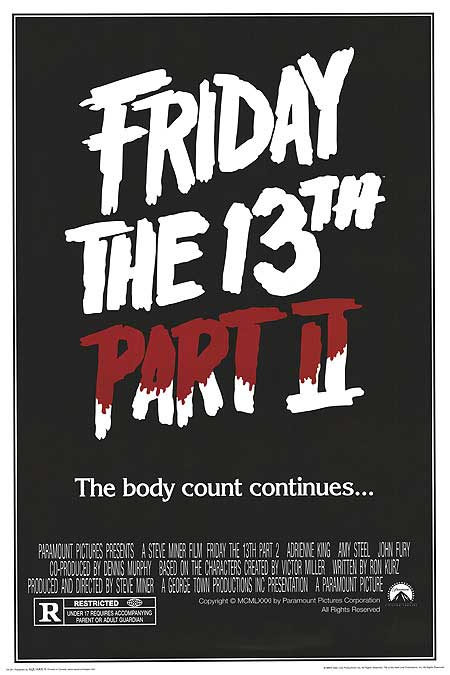 (This review contains spoilers, but it is such a bad movie, so who really cares.)

A new campsite near where the massacre from the first film took place and still on Crystal Lake opens for business. Soon the counselors begin receiving the same type of bloody fate.

I was a bit surprised how incredibly derivative this movie was. In many ways it is almost exactly like the first one even to the point of having them killed at night during a thunderstorm. My opinion is that if it says ‘Part 2’ in the title then that should mean some sort of story progression, or evolvement, but instead it’s just the same formula getting repeated. The only real difference is that the young counselors aren’t the only ones who get killed as Crazy Ralph (Walt Gorney) ends up being one of the killer’s victims as well. Although I thought his murder looked a bit fake, I was still glad to see it as the idea of having to hear him say “You’re all doomed” for another ninety minutes seemed more horrifying.

It might have been more intriguing had the story centered on Alice Hardy (Adrienne King) the sole survivor from the first film who is now living by herself many miles away. The film starts out with her, but she is then immediately killed and then it’s back to the campsite for the same old, same old. I also found this opening sequence to be a bit baffling.  Here is a woman living alone and still suffering from nightmares of the attack and yet it is only after she wakes up from one of these bad dreams that she decides to lock her front door and close her kitchen window, which has no screen and wide enough for even a large person to crawl through, even though I would’ve thought she should’ve done that from the very start.

One plus to the movie is that the cast here is more attractive than in the first one. Amy Steel as Ginny Field is pretty and looks great in a bikini. I liked how her face has a very natural quality to it, but still quite appealing without any excessive make-up. Kirsten Baker, who plays another counselor named Terry, is really hot and can been seen fully nude from the front and back. For the female viewers I’d say the male cast has more hunks as well. I also found it interesting how the character of Mark (Tom McBride) who is confined to a wheelchair is still portrayed as being sexy and appealing to the other female characters, which is good. Also, for the trivia buffs, McBride was the first actor to portray one of the counselors to end up dying in real-life.

The killings are a letdown. At times it seems that director Steve Miner is trying to put a satirical spin on the bloodshed, but then pulls back at the last minute. For instance when Mark gets ‘the axe’ he is seen in his wheelchair rolling down a long flight of steps and I thought this may be an amusing homage to the classic Battleship Potemkin where a baby carriage rolls down a long flight of stairs while a battle rages all around it. Instead we see the victim and wheelchair go halfway down and then the shot freezes and cuts away without the expected pay-off. Another part that is similar to a famous scene in Mario Bava’s Twitch of the Death Nerve where a couple has a spear go through them while they are making love. Here Jason attacks the couple, but all we see is the end of the spear going through the bottom of the mattress and touching the floor, which seemed unrealistic. It was hard to believe that there would be a spear long enough and a person strong enough to push it through two bodies and what would probably have been two mattresses to get it to reach the floor.

This also brings up the issue of the Jason character. Supposedly this is a ‘mentally and physically challenged’ individual with limited thinking and social capabilities. Yet in the scene where he murders the couple in bed he then removes their bodies, which would be rather difficult as supposedly they have a big spear going through them, and places them somewhere else in the room so when Ginny comes in he is the one lying in the bed where he then jumps out and attacks her, which seemed too sophisticated and elaborately thought out for someone of his supposed mental state. Also, the opening sequence where he kills Alice doesn’t make sense either. How is Jason, who has been living in a ramshackle shed in the woods most of his life able to track her down and figure out where she is? Also, I would think anyone living alone in the woods would be very intimidated and confused coming to a big city, or any populated community for that matter. There is also the fact that with his deformity, even if he is wearing a mask, he would have called a lot of attention to himself, and it is very unlikely that he would have gotten away with her murder undetected. In addition there is the matter of his mother’s decapitated head, which he keeps on top of a candle lit altar in his shack, but even in a shriveled up state it still doesn’t look anything like actress Betsy Palmer who played the role in the first film.

This is the type of film that gives slasher movies a bad reputation. It is very mechanical and unimaginative. There are a few shocks here and there, but I saw them coming and there is no sustained tension at all. Of course at the very end you do get to see what Jason looks like unmasked and my response to that is ‘whoop-te-do’.