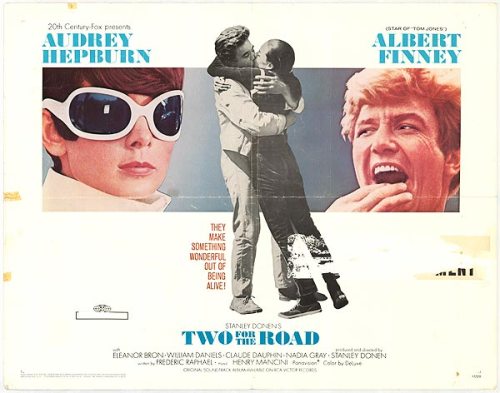 This is a unique and diverting look at a couple (Albert Finney, Audrey Hepburn) traveling the French countryside while dissecting their turbulent marriage. The road of course represents their long and winding relationship. It cleverly cuts between when they first met, which seems to have been on the same road, to twelve years later. The edits between the two stages are creative as is the majority of this fluid and entertaining movie. It wants to be silly, fluffy, serious, complex, exotic, avant-garde, and romantic all at once and most of the time it succeeds proving what an over looked, unsung genius director Stanley Donen is.

It’s a movie made for couples, but probably those who have been married for quite a while and can relate to the characters here who have been through the rough spots and have learned to accept their partner and the flaws that come with them. This film tries to dig a little bit deeper, which helps it stand out. It also has a more relaxed European attitude, especially in regards to ‘indiscretions’.

On the negative side the film contains a lot of old fashioned sexist attitudes. For instance the man is expected to be mechanically inclined and in control of every situation, which becomes very apparent in the scene where he has to get underneath the car to fix it while she sits on top of the vehicle without any care or inclination to what he is going through. The man is also expected to be the sole provider of the family while the woman does the majority of the child rearing.

Audrey, who wears an amazingly high number of stylish, chic outfits, looks more like a runway model sporting the latest fashions than an average housewife on a country drive. I realize that they wanted to accentuate her beauty, but it ends up being a distraction at the same time. If the intention of the story is about an average couple going through average marital problems then at least have them look the part.

The Henry Mancini score is pleasant as usual, but eventually gets overplayed. It’s also not as introspective as it wants you to believe, but on a slickness level it gets an “A”. Also, watch for Little Ruthie who is the world’s most obnoxious child.