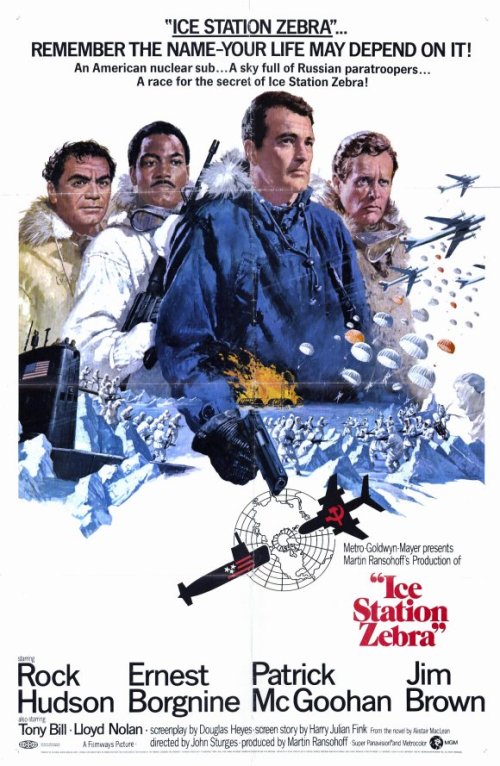 4-Word Review: It’s cold up there.

Commander James Ferraday (Rock Hudson) is assigned to head a submarine crew up to the North Pole to rescue stranded members of a weather station called Ice Station Zebra. He is told that there is another reason for the mission, but that is top secret and it will not be disclosed to him until he gets there. In addition to the crew he will be bringing along another man named David Jones (Patrick McGoohan) who is aware of the secret details. When they arrive at the location they find themselves amidst a major international crisis.

The photography is outstanding. This movie marks the first ever continuous filming of a submarine dive and the footage is breathtaking. The scenes showing the submarine trapped beneath the ice is incredible and some of the best stuff in the film. This was also done on an actual sub and the shots showing its interior are interesting. I had no idea how very roomy they can be and found it fascinating to realize how many different compartments there are. My only quibble here is that when Boris Vaslov (Ernest Borgnine) gazes at the nuclear power that propels the sub the viewer only sees the reflection of the orange glow that it gives off. The camera should have been pointed straight down, so the viewer could have witnessed the same thing as Boris.

The scenes taking place at the North Pole are impressive as well, but flawed due to the fact that it was all clearly done on a sound stage.  The snowy artic formations look like they were made from ceramic. The men are shown outside not wearing any hoods and it that bitter climate it would have mean instant frostbite. I didn’t notice it at the time, but other viewers have called to attention that their breath is not showing and in cold weather it always will. Still I was willing to forgive these small oversights because overall the production design is imaginative. The bird’s eye view of the weather station amidst the icy landscape is sprawling and the longshot of parachutes dropping from the sky is exciting.

Hudson would not have been my choice for the lead. He managed to give one really great performance, which was in Giant, but otherwise he is just a good-looking well-built guy with limited acting abilities. He always says his lines with hollow sounding voice and never any emotion. Pairing him with McGoohan, who is a much more creative performer and stronger personality, doesn’t work.

Legendary football player Jim Brown is great as Captain Leslie Anders. He may not be the best actor, but you have to love his badass stare. It has to be the best badass stare of all-time and helps give the proceedings an extra point. However, the character he plays is a bit of letdown especially when he loses in a confrontation to Borgnine, which seemed a little pathetic. Borgnine, who speaks in a Russian accent here, is fun as always.

The plot, based on the novel of the same name by Alistair MacLean, is nicely complex. The viewer is kept in the dark about the secret, which helps with the intrigue. There are some exciting moments, but it is never riveting. The movie is overlong and could have been trimmed substantially, which would have helped with the pacing.  Viewers should still find this enjoyable, but as a whole it is average at best.