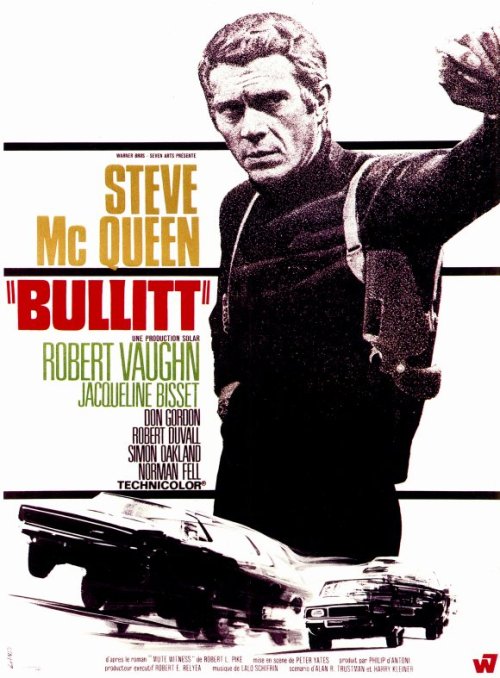 A police detective by the name of Bullitt (Steve McQueen) is hired to protect a state witness who is set to testify against the mob. Problems ensue when the witness is killed and Bullitt makes it his personal mission to find the killers even if it means bending the rules.

A renegade cop going against the system may seem like an old formula now, but here it is fresh and convincing. McQueen is gritty and authentic in his role and you find yourself caught up in his mission. The mystery is intriguing and even a bit complex. The car chase is incredible and still holds up today against any other car chase out there. You are made to feel like you are in the car with him and as it goes down the steep San Francisco hills you start to think you are on a roller coaster. The camera work and cinematography is excellent and the entire production is slick from beginning to end.

Robert Vaughan who plays Chalmers is one of the prissiest characters you will ever see and expounds a vocabulary that you won’t likely ever hear in real life. The character is incredibly pretentious and you look forward to his comeuppance, which he eventually receives although I wished it had been a little bit more.

Jacqueline Bisset as Bullitt’s girlfriend Cathy is unnecessary and almost like an intrusion. Her little ‘speech’ that she gives along a roadway after witnessing a crime scene does nothing but bog the movie down. Supposedly she was put in to ‘humanize’ the Bullitt character and show his softer side, but he’s an outstanding character without it.

As mentioned the slick camera work is very good, but it does start to resemble another great McQueen picture that came out around the same time The Thomas Crown Affair. The film also loses its momentum after the car chase and the climatic foot chase along an airport runway is not as exciting.

This is still a terrific cop thriller that set the standard for all others. McQueen is always great and here he really delivers. The car chase alone is worth watching and shouldn’t be missed by any self- respecting action fan.