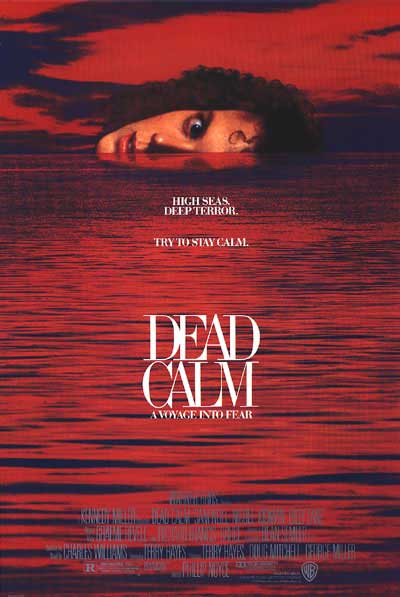 4-Word Review: Psycho on a boat.

Rae and John (Nicole Kidman, Sam Neill) are a young couple who in an attempt to get over the death of their child go on a cruise along the coral reef in their own private yacht. After many days at sea they come upon a boat with only one survivor. The man (Billy Zane) comes aboard their ship and almost immediately begins to behave strangely. Tensions slowly rise until it becomes obvious that this man is a full blown psychotic who has killed everyone on the first boat and plans to do the same to them.

In many ways this is a foundation to a perfect thriller. The two main characters are sensible and intelligent people who just happen to be at the wrong place at the wrong time. Like with every thriller there are a few minor loopholes, but overall the situations are done in a believable fashion with no extreme jumps in logic. The script is tight and the suspense consistent. The action comes naturally through the scenarios and is not forced or played out too long. Having it take place at sea gives it a distinct flavor and the setting limitations makes the story more creative. It also hits on one of the main ingredients of fear which is isolation.

The only minor liability is the Zane character. At certain points he seems very human and a fascinating psychotic who is definitely no machine-like slasher. There are times when he is calm and complacent and his disturbed traits only surface sporadically thus giving him a much more multi-faceted personality. Unfortunately he is also careless and amazingly dumb, which hurts the tension because it seems to be telegraphing his own demise. Either way Zane is convincing in the role.

The Neill character makes a good counterpoint. He is savvy and no-nonsense. He takes action into his own hands and doesn’t fall into the helpless victim mode like in other thrillers. The Kidman character is another refreshing change of pace. She is not the standard ‘screaming lady in a bikini’, but instead shows equal resourcefulness.

The film does resort to the modern day slasher trend of having a ‘double’ ending. Yet everything else is so slickly handled that you can almost forgive it. For thriller fans this should be a real treat.

Posted in 80's Movies, Drama on the High Seas, Foreign Films, Movies Based on Novels, Movies from Australia, Thrillers/Suspense