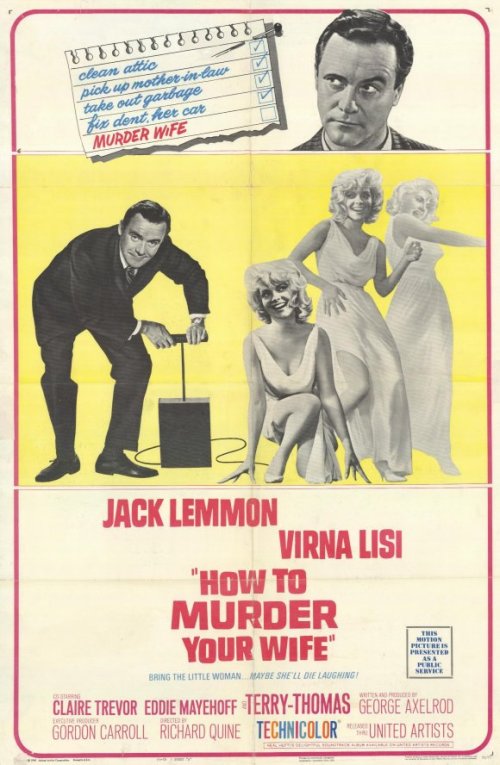 Stanley Ford (Jack Lemmon) is a successful cartoonist living the bachelor dream in a penthouse loaded with perks and helped run by his loyal butler Charles (Terry-Thomas). Things go horribly wrong when one night while attending a bachelor party for one of his friends he becomes drunk and finds himself the next day married to a beautiful Italian blonde who can’t speak a word of English. Despite this she starts to take over his life, running Charles out of the home and ruining his career and friendships in the process. To vent his frustrations he has the main character of his comic strip murder his wife and to insure that it is believable he plays out the murderous sequence in real life, but using a mannequin in the place of an actual body. When his wife sees the comic she becomes hurt and runs off making people believe that she was killed when no one can locate her.

This is a much edgier Lemmon comedy from what he has done in the past and the change is welcome. He plays a more sophisticated extension of the character that he did in Under the Yum Yum Tree. The scenario is clever and original for the most part, but what surprised me was the extreme cynicism it had towards the institution of marriage. Most films both before and after have made some tongue-in-check jokes towards it, but this things treats it like it’s an ugly monster that needs to be beaten with a club. This is done mainly from the man’s point-of-view, which is fun and refreshing simply for the fact that something this politically incorrect could never be made today, but also there are a few scenes were the Claire Trevor character teaches Lemmon’s wife how to manipulate the husband and get away with it. What is said is all right on target with the truth, which may make some cringe while they are laughing, or if you are single it will be just another excuse to gloat. The brilliantly written, hilarious court room segment at the end where Stanley tries to get his lawyer friend Harold (Eddie Mayhew) to press an imaginary button, which he convinces him will kill off his wife and allow him to be set ‘free’ is the best part.

Lisi does well in her role and the fact that she can’t speak any English, at least at the beginning, makes her presence more interesting. Although done many times before, her popping out of a giant cake at the bachelor party is quite steamy and enticing. Her dance on top of a piano is provocative and even more surprisingly is when older actress Trevor does the same dance later on and is almost as alluring.

Thomas is a legendary comic character actor and quite possibly one of the best who ever lived. His presence helps the film immeasurably and it is a shame that he is not in it the whole time. Mayhew is very good as well and although it takes a while for him to get going I found myself enjoying his scenes and his little quirks, including his weird laugh, more and more as it went along. His performance in the climactic courtroom segment is tops.

The script, by George Axelrod, seems a bit disjointed and over-long. It starts out as a quirky comedy then falls into being a contrived, fluffy comedy during a really slow middle part, only to recover with a resounding end. The script could have been tighter, but the finale is so funny that I forgave it and it is well-worth seeking out for the comedy fan looking for something a little different. In fact I am surprised this thing hasn’t acquired a cult following.

My only other complaint is the music score by Neal Hefti, which sounds much too similar to The Odd Couple score that came out only three years later and also starred Lemmon.