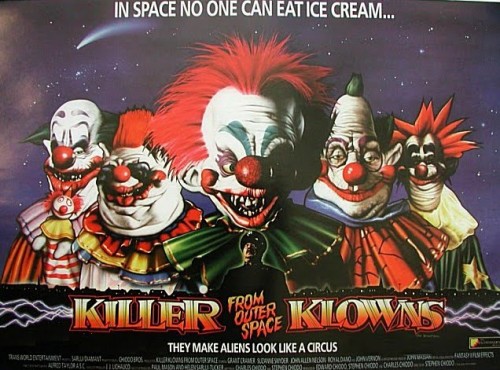 This is a fun and well-crafted sci-fi satire dealing with outer space aliens that resemble clowns and fly in a spaceship that look like a circus tent. They arrive on earth and begin killing everybody, wrapping them up in a cotton candy like cocoon and storing them in a freezer on their spaceship. When these cocoons become ‘ripe’ they stick a straw into them and suck out their blood.

It’s all a very unique parody on clown culture and those old sci-fi movies from the 50’s. There are shades of Invasion of the Body Snatchers, The Day the Earth Stood Still, War of the Worlds, and The Blob to name just a few.  Everything is fast paced with an inventive mind set. All those things that were always considered harmless and childlike have been turned into threatening and scary things here and it’s brilliant. The best one is the balloon dog that becomes a vicious barking little beast.

The special effects are outstanding. For a low budget picture this may actually be the best you will find. The circus tent spaceship is impressive especially when it takes off at the end. The popcorn ray guns and the shadow figure of a hungry tyrannosaurus are also good. You got to love the distorted features of clowns that are made to look genuinely frightening where even their bodies are misshapen and grotesque. You start to believe that these are actual creatures and not people inside a costume.

The only drawback is that it was made in the 80’s and is embedded with very bland looking, bland acting teens as the protagonists that seem like cookie cutouts from the genre. It even starts out with the very clichéd scene of having them making out in their parked cars at a secluded, wooded area. Outside of the clowns John Vernon has the only other interesting part. He plays a hardened and slightly corrupt cop who has seen it all and doesn’t fall for anything. He is both edgy and funny and gives the film some added grit. His death scene is good (like most of the others) but it would have been nice had he been able to carry the picture.

Overall this is clever and creative and sure to click with those possessed with a warped sense of humor.