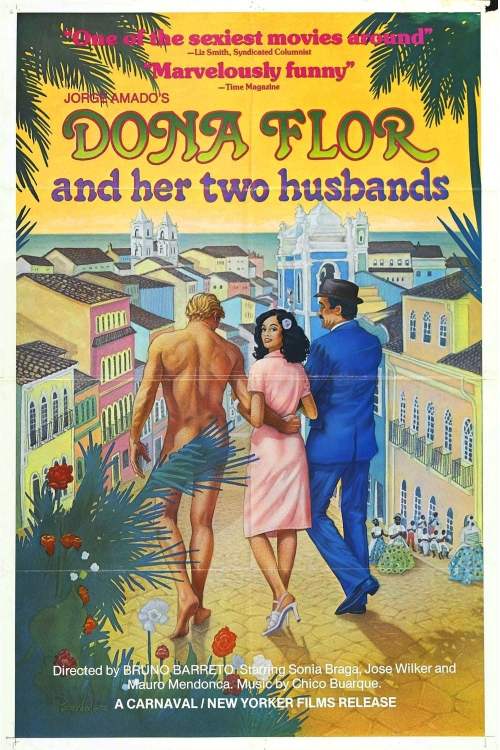 4-Word Review: One is not enough.

This is an oddly structured Brazilian film that became a world-wide hit due to its explicit, edgy storyline.  It details the account of a woman named Dona Flor (Sonia Braga) whose first husband Valdomiro (Jose Wilker), was a bit on the wild side. After gambling away all of their money he dies. She becomes determined not to make the same mistake twice, so she remarries another man who is a doctor (Mauro Mendonca) and a much more responsible mate, but also stiff and boring. Problems ensue when the first husband, who she misses because he was more erotic and exciting in bed, comes back in the form of a ghost who only she can see.

The movie on a whole is well made. The characters are all likable and the theme music, which is played throughout the film, is appealing. The on location shooting is also quite distinctive. It really gives you a genuine, rare flavor of a small Brazil village and the people who inhabit them.

My main complaint with the film is that it takes the entire first hour just too illustrate her marriage with her first husband and the second hour to show her mourning and eventual remarriage. It’s not until the FINAL FIFTEEN MINUTES that the scenario the whole film is based on actually happens. When it does it is lively and funny, but the majority of the movie is surprisingly low key and melodramatic. The highly touted sex scenes are overrated. They are too brief and spread out very thinly.

Braga does well in her star making vehicle. She is able to convey both a simple, sweet nature as well as a sultry, sensual one. She has a pretty face and really does look great naked.