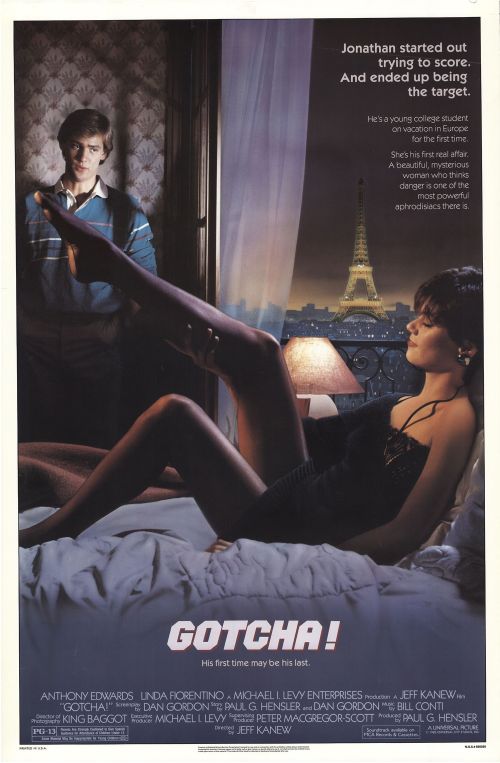 Jonathan (Anthony Edwards) enjoys playing the make-believe spy game of Gotcha on his college campus by shooting his fellow students with paint darts of which he is quite good at. For a vacation he goes to Paris, France and meets Sasha (Linda Fiorentino) who is a real-life spy transporting undercover documents from behind the iron curtain. She gets Jonathan to travel with her to East Berlin where he reluctantly finds himself caught-up in the spy action and having bad guys shoot at him with bullets instead of paint balls.

The film has its engaging moments, but the plot gets played-out in a haphazard way. The beginning comes off too much like just another banal coming-of-age comedy with guys using all sorts of corny lines to get women to go to bed with them and a lot inane dialogue and comedy bits are used to help string it along.

Things do improve once he meets up with Fiorentino who puts on an effective foreign accent and adds much needed chemistry. The vivid on-location shooting avoids the well known landmarks and instead focuses more on the hotels and restaurants, which makes the viewer feel like they’re traveling alongside the characters.  Jonathan’s transition from cocky college student to scared kid in way over-his-head is interesting too, but something that I wished had been played up more.

Edwards’ performance helps the viewer remain sympathetic to his quandary despite the fact that it was his own naivety that got him into his jam. I didn’t like his hairstyle though, which to me looked more like a wig and, since he’s shown to be openly bald in his later years, it probably was. He was also older than his character and looking very much like the 23 years of age that he was, which is what Fiorentino guesses when she first meets him and not like 18, which is what his character supposedly is making the opening conversation that the two have unintentionally ironic.

The third act in which Jonathan returns to the states, but the Russian spies continue to chase after him, is when this thing really goes south. It would’ve worked better, and been more believable, had the entire spy scenario remained in Europe instead culminating on the same college campus where it began making the intended irony too forced and too cute for its own good.

There were times when I did get caught-up in the intrigue, but film ruins the tension by always answering it with a comical twist that makes it come-off as too gimmicky. There’s also no explanation as to what was on the film role that Jonathan and Sasha were trying to smuggle out and the Russians were so eager to get back, which makes the plot transparent instead of exciting.

The one moment though that I really did like and even found quite memorable is when a caged tiger is brought into a classroom to show the veterinarian students how to shoot a sick animal with a sleep dart. The animal seems to be in very real pain and with genuine moans of discomfort and the part where he gets hit with the dart forces him to leap up in his cage in a very startled manner. I’m not sure how they were able to pull off getting a legitimately hurt tiger into the scene, but it’s the one segment where the movie isn’t silly and it’s too bad the rest of the script couldn’t have fallen in-line with that same type of approach.