Laura Mars (Faye Dunaway) is a successful fashion photographer who enjoys putting a level of stylized violence into her photos, which makes her work controversial to some, but evocatively edgy to others. One day she starts seeing visions of people that she knows being murdered from the killer’s perspective. Later, when she finds out that her friends are being killed she goes to the police where the lead investigator John Neville (Tommy Lee Jones) tries to work with her in unmasking the killer’s identity.

Despite having John Carpenter’s name in the credits he never actually wrote the screenplay, but instead did an 11-page treatment that got rewritten by the studio with a completely different ending, which helps to explain why it gets so stupid from the very beginning. What annoyed me most were the segments showing the killings, which aren’t fully the killer’s perspective since they have cutaways showing a hand in the air with a knife in it, which is technically the point-of-view of the victim.

I also thought it was goofy that she sees these visions of the killings as they occur with one happening to her friend Elaine (Rose Gregorio) when Laura is just a few blocks away. When Laura arrives at the scene of the crime, which takes her less than a minute to do, the police are already there investigating, which has to be the fastest response time by any police force in the history of the universe.

Dunaway’s presence unfortunately just makes it worse. I’ve been a big fan of hers for years and in a good dramatic role with competent direction she can be fabulous, but here she overacts making her performance come-off as affected and even laughable. Many believe it was her starring role in Mommie Dearest, which came out three years after this one, that ushered in the downfall of her career, but I actually believe it started with this one.

Critic Leonard Maltin, in his review of the film, complained about Dunaway’s ‘kinky colleagues and their lifestyles’, which he deemed as being ‘ a real turn-off’, but I failed to see anything that was all that shocking or outrageous unless he was referring to the lesbian relationship between the two sexy models (Lisa Taylor, Darlanne Fluegel) that I quite frankly wouldn’t have minded seeing more of. As for the provocative artwork it is by today’s standards quite tame and certainly not something that I or most other people would pay good money to see, which made it hard to believe how Ms. Mars was able to afford such a snazzy luxury apartment, which looks like a place more suitable for a corporate businesswoman than a pad for an artist anyways.

The relationship between Dunaway and Jones is equally ridiculous especially since he gets into a relationship with her while the investigation is still ongoing, which breaks all professional and ethical boundaries. A more intelligent script would’ve had the police dismiss Ms. Mars’s claims upfront and consider her to be total loon, or investigate her as the prime suspect. The film also fails to answer the most pressing question, which is what great cosmic force caused her to have these visions in the first place? 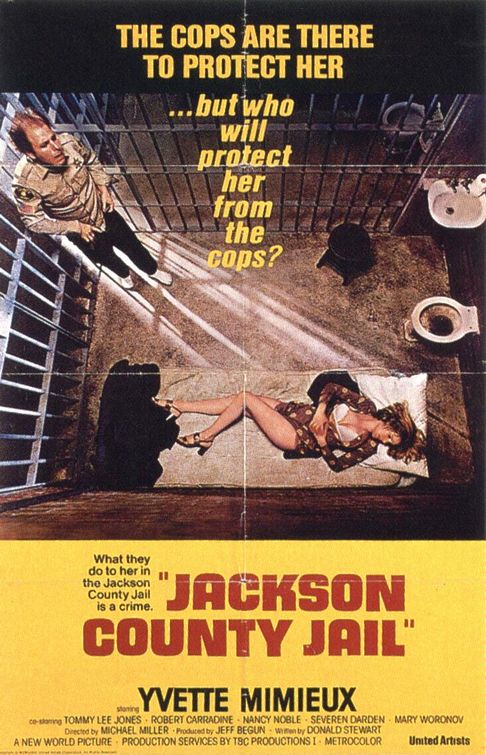 Nothing seems to be going right in Dinah’s (Yvette Mimieux) life. She quits her job as an advertising executive only to come home to find that her husband (Howard Hesseman) has been cheating on her. She decides to travel across the country and back to her old digs in New York. Along the way she picks up two hitch-hikers (Robert Carradine, Nancy Lee Noble) who end up robbing her at gunpoint and driving off with her car and money. When she walks to the nearest town she finds that no one is willing to help her since, without any identification, she can’t prove who she is. The sheriff (Severn Darden) throws her in jail temporarily until her identity can be confirmed. While there she gets raped by one of the deputies (Fredric Cook) and then goes on the run with Coley (Tommy Lee Jones)  a small-time crook and drifter.

This is yet another Roger Corman produced cheapie made to capitalize on the exploitative low budget drive-in fervor that was so popular during the early to mid 70’s. This one fares better than most as it manages to retain its gritty tone throughout without ever resorting to campiness. The car chase doesn’t have any of the cartoonish or humorous stunts as most others did during that time period, but instead like in Cannonball! shows more of the potential ugly side to them by having several of the vehicles crash and blow-up in flames and killing those that were inside them, which helps accentuate the realism.

The police aren’t quite as inept either although I did find it curious that the cops in the helicopter once they found where Mimieux and Jones’s hideout was didn’t continue to chase the two via the air as they tried to escape down the road in their pick-up. The part where the cop shoots at Jones who collides on foot into a marching band is absurd too as no policeman with half-a-brain would fire into an open crowd as it’s too dangerous and would almost assure innocent victims getting hit.

Mimieux is adequate and the funky 70’s style compact car she drives in with its roundish flying saucer body and oversized steering wheel is a laughable relic. However, for someone whose lived in L.A. she didn’t seem savvy especially when she decides to pick-up two hitch-hikers, which is just asking for trouble, or naively unaware that the obviously drunken, leering cafe owner (Britt Leach) is only being ‘helpful’ so he can have a chance to pounce on her.

Jones is excellent in support, but I found it odd that despite being considered a ‘good guy’ he makes no effort to stop her rape, which he witnesses by being in the adjoining cell, but then when she kills the rapist by beating him over the head with a stool he reaches through the bars and stops her.

The film’s most interesting performance is Fredric Cook’s who plays the rapist. His film career never really took off and he spent most of his life working as an acting teacher, but here in his film debut he really shines. I liked the way his character starts out as a redneck dope who seems put in for comic relief and then quietly becomes menacing as he serves Mimieux her food, explodes into a sudden massive rage, and then after the act is committed becomes guilt ridden and even ashamed, which creates a very interesting portal into the mindset of most male attackers.

The second half unfortunately slows up creating boring segments when the pace and tension should instead be revved up. The wide-open ending offers no conclusion to Mimieux’s ultimate fate and the film’s message is vague and transparent.