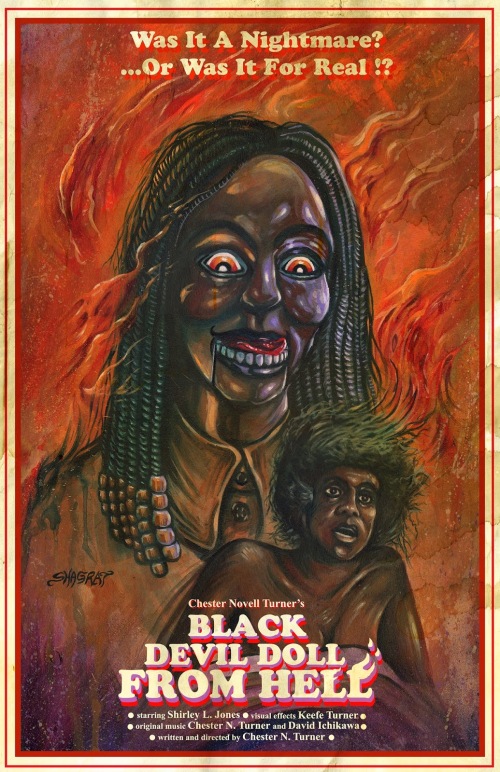 4-Word Review: She fucks a doll.

Helen Black (Shirley L. Jones) is a devoutly religious woman living alone and spending most of her time going to church while also believing sex should only be within the bounds of marriage. One day she visits an antique store and spots a puppet that catches her fancy. She decides to buy it despite vague warnings by the store clerk that it possesses strange powers. When she brings it home it suddenly comes alive, ties her up and begins having sex with her, which she finds that she actually enjoys. When the doll disappears she decides to throw away her religion and become the neighborhood slut instead by picking up strange men wherever she can find them and bringing them back home for raunchy action.

This movie could best be described as the low budget, soft core porn version of Trilogy of Terror and while the story has some outrageously voyeuristic elements the production quality is so poor that it never allows the viewer to get into it. The whole thing is shot on a grainy VHS tape giving it a very amateurish look from the get-go. Certain scenes are out-of-focus and director Chester Novell Turner seems to have no understanding of editing as the camera pans wildly when simply cutting to a certain shot would’ve made more sense. There is a lot of extraneous footage as well including watching Jones walking down the sidewalk that seems to go on endlessly and an overplayed thumping music score that becomes headache inducing.

Just about all the action takes place in Helen’s cramped, rundown home, which has no visual appeal whatsoever. The sex scenes are gross and all the nudity comes from star Jones who is not exactly model quality or someone you’d want to see naked.

The only interesting aspect is the doll itself especially with its vulgar dialogue, but unfortunately he’s not in it enough. The effects used to create him are botched as it is clear when it gets shown from behind that it is not a puppet at all, but a small child, or in this case the director’s nephew.

Sitting through this is an arduous challenge. IMDb lists the runtime as 1Hour and 10Minutes, but the version I saw went almost a full 90 minutes. Some may find a few cheap laughs at the beginning due to its technical ineptness, but watching it all the way through becomes torturous and makes having sex with a puppet, or even killed by one seem enjoyable by comparison.