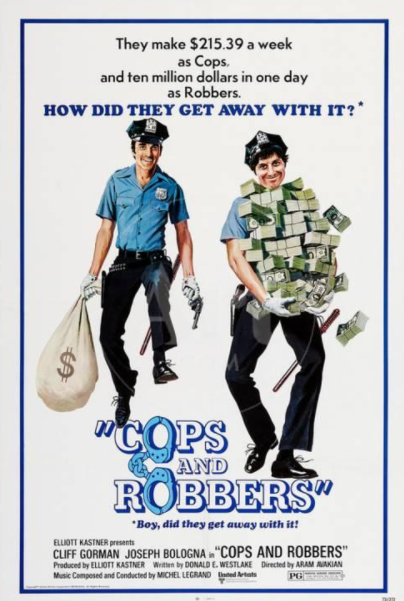 Tom (Cliff Gorman) and Joe (Joseph Bologna) are two New York City policemen who are tired of their jobs and want to retire from the working world, but can’t because they need to support their families. They decide the only solution is to commit a heist by working with a local mob boss (John P. Ryan) to rob a Wall Street brokerage firm out of  bonds that cannot be traced. The two come up with an elaborate scheme  to pull it off during the day while the place is still open and they’re still in uniform. At first things go smoothly, but then two other cops show up forcing Tom and Joe to destroy the bonds they’ve just gotten their hands onto in order to avoid getting caught. While this helps them out of their immediate jam it still gets reported to the press that the place was robbed making the crime boss believe he has been taken advantage of and compelled to get revenge.

What stands out is how different this is from the conventional cop flick. Instead of having a loud, pounding score the music here is soft and tranquil like the breezy, warm climate of a tropical island, which is where both Tom and Joe wish they were. The cops aren’t portrayed as being authority figures either or compromised victims of a corrupt system, but just regular suburbanites trapped in a dead-end job like many people and looking for a way out.

The crime is done differently too. Usually, in most other cop flicks, once the robbery gets going you’ll see the pace speed up with fast edits, but here it gets played-out in real time, which actually makes it more intense. I enjoyed the camera cutting back and forth from showing things from Tom and Joe’s point-of-view as well as from the black-and-white monitor seen by the security guards. The authentic office atmosphere has many of the employees not even knowing a robbery is going on while the two main people who do realize what Tom and Joe are up to, well played by the elderly Shepperd Strudwick and a much younger African American actress named Ellen Holly, display odd reactions and facial expressions that doesn’t conform to the situation, but eventually gets explained by the big twist that comes later.

Gorman gives an awesome performance, which is made all the more impressive when you realize just 4 years earlier he was the highly effeminate gay character in The Boys in the Band, but here he’s a macho heterosexual. I kept waiting for him to reveal mannerisms of his past role, but instead he successfully pulls off being two diametrically different people with no connection to the other a feat not every actor, even some of the good ones, are able to do.

Bologna goes against type too. Usually he’s loud and brash, but here more quiet and nervous. In the Kino Lorber DVD bonus section he recounts a funny incident that happened to him during the production when he was forced to make a call home to his wife (actress Renee Taylor) in real-life. Since there were no such things as cellphones at the time he had to go to a nearby phone booth while still wearing the cop uniform of his character. It was there that he noticed a thug beating up a victim on the sidewalk and he shouted at the man to stop it. Since the man presumed Bologna was a cop it was enough to get him to run away, but then the other pedestrians started to harass Bologna for not chasing after the bad guy and arresting him. He tried to explain that he was just playing a policemen in a movie, but no one believed him.

The film’s final segment, which takes place in Central Park, is well choreographed and features a unique car chase.  It’s just a shame that Aram Avakian who burst onto the film scene with the provocative, ahead-of-its-time cult favorite End of the Road, didn’t go on to direct more movies as he did only one more, 11 Harrowhouse, after this one before retiring to become the head of the film department at the State University of New York where he worked until his death in 1987. His approach here makes all the difference as he relies not on the typical cop formula action, but instead on the nuance.