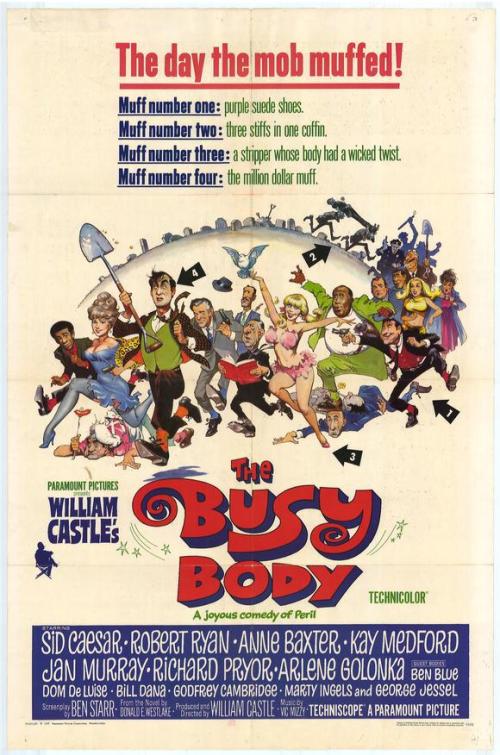 George Norton (Sid Caesar) is a nebbish mama’s boy who, for whatever reason, gets taken in by Charley (Robert Ryan) a Chicago mob boss. Charley even gives George a seat on his board of governors. When a fellow crime boss (Bill Dana) gets killed in a freak accident it is George who selects a blue suit for the corpse to wear at the funeral. Unfortunately that blue suit was lined with a million dollars and Charley demands that George dig up the body and retrieve the money, but when he does he finds that the body is gone and thus begins a long, winding, ‘madcap’ search for the missing body and money.

Noted horror director/producer William Castle decided late in his career to give comedy a stab and this is the result. The beginning is mildly amusing, but the humor gets terribly strained and a 100 minute runtime is just too long for such trite material. Everything gets suppressed into silliness with an overplayed music score that has too much of a playful quality to it making the whole thing thoroughly ingrained on the kiddie level from start-to-finish.

Dom DeLuise has an amusing bit as a mortician that would really rather be a hairdresser and Kay Medford is quite funny as George’s doting mother, but the rest of the supporting cast is wasted, which includes Richard Pryor, in his film debut, playing in a role that does not take advantage of his comic skill. Caesar is just not leading man material and his vaudeville-like shtick is quite passé and predictable. His co-star Ryan is far funnier and without having to try half as hard.

The plot goes off on wild tangents until it becomes impossible to follow and quite pointless. The whole production is horribly dated and will not appeal to kids or adults. In fact the film’s intended audience has long ago passed away making this thing a silly relic of its time and nothing more. 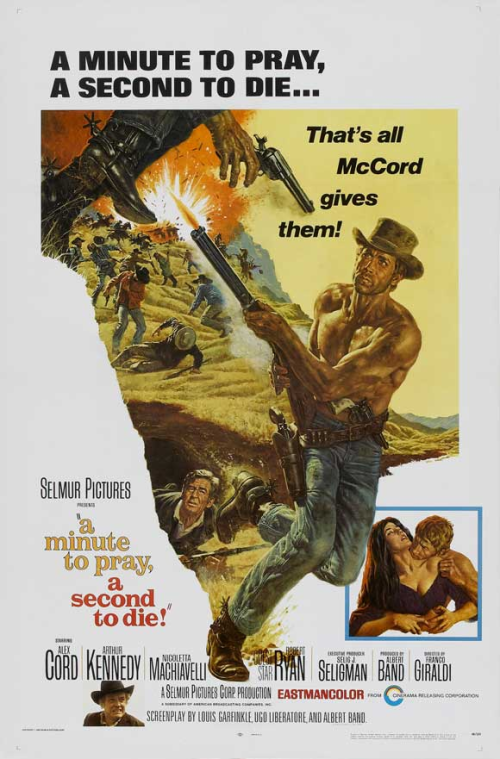 Clay McCord (Alex Cord) travels to New Mexico where the Governor (Robert Ryan) promises amnesty to all outlaws. Clay finds himself at odds with the other outlaws who are traveling to the state for the same reason, which causes him to get involved in numerous gun fights and although he is an excellent shooter he also suffers from strange seizures that temporarily paralyze his arm. When he has these fits it makes him completely vulnerable to all those who might want to take advantage of him. He tries to keep this condition a secret while looking for a Dr. which he hopes can cure him, but the other outlaws get wind of it and start to track him down.

One of the biggest problems with this movie is that Director Franco Giraldi is no Sergio Leone and you spend the whole time wondering how much better this would have been had Leone directed it. Giraldi fails to have Leone’s visual style or lyricism. Everything is staged and photographed in a very conventional unimaginative way with a lot of choppy editing. The one fun and interesting scene that the film does have Giraldi screws up and it entails Clay as a young boy watching a group of cowboys laughing at his father and dragging him through the mud while he suffers an epileptic seizure. The crying boy becomes so distraught that he steals one of the men’s guns and then turns around and shoots them all dead. Instead of taking advantage of the scene’s irony and showing the men with shocked expressions and even possibly having them getting hit and falling down dead in slow motion Giraldi instead immediately cuts away the second the boy starts shooting, which doesn’t allow the scene to gel and stand out as much as it should.

The music is another issue and in desperate need of Ennio Morricone’s distinctive orchestral sound. Carlo Rustichelli the composer here has a score that places too much emphasis on the violins and creates a heavy, droning melody that would be better suited for a drama. The dialogue is also dubbed. I know a lot of Italian filmmakers did this especially during this era. I’ve never been sure why and I have never liked it although with Dario Argento’s horror movies it somewhat works because it heightens the surreal effect, however here it cheapens the production and cements it as a definite B-movie.

Cord doesn’t have the charisma or presence of a leading man. His deep voice and laid back delivery makes him sound like he is only half awake. He glides through the film with too much of a detached and unemotional persona. The biggest problem though was the character. This is a man who has no idea when his seizures will occur and knows full well the vulnerable position they will put him in and yet he continues to behave in a brash, cocky way with everyone he meets and singlehandedly tries to right every wrong when it would have been much more practical to simply lay low and blend in with the crowd.

Nicoletta Machiavelli is a beauty and although I wasn’t so sure about her acting her face was so appealing that I wanted to see her in more scenes and was disappointed when she got killed off so quickly. Veteran actor Arthur Kennedy who wears a wig gives his usual stalwart performance as the town’s marshal, but it is not enough to save the picture. Ryan is okay as the governor, but I found it hard to believe that a man who looked like he was clearly getting elderly would be able to punch out as many guys as he does let alone even one of them.

There are quite a few gun battles particularly during the first half, but they are generic and the final one really isn’t that exciting. The ending peters out with a whimper and this spaghetti western wannabe does nothing but make you long to go back and re-watch a classic one.