A new theme park has opened up in Orlando, Florida. This one has been designed by Calvin Bouchard (Louis Gossett Jr.) and will feature underwater tunnels and an aquatic pool with dolphins and whales. However, just before the grand opening a great white shark and its offspring sneak in through the park’s closing gates. It’s now up to Mike Brody (Dennis Quaid) the son of Chief Brody from the first two Jaws movies, and marine biologist Kathryn (Bess Armstrong) to stop the shark from attacking the people as they venture into the water and tunnels.

This sequel was originally conceived as being a spoof and the title of it was going to be Jaws 3, People 0. John Hughes was commissioned to write the screenplay and Joe Dante was slated to direct. It was even going to have the author of the ‘Jaws’ novel, Peter Benchley getting eaten by a shark right at the beginning in his very own backyard pool, but Steven Spielberg became aware of the idea and threatened to pull out of the deal he had with Universal if they went through with it, so it was nixed, which is a shame because even if the humor had been lame it would still have been better than anything you’ll see here.

Like with most sequels there aren’t enough new elements entered into the mix to make what we see interesting. It just replays on the same tired formula including the scene where Quaid frantically warns everyone to get out of the water much like Roy Scheider did in the first one, which comes off as derivative and uninspired. The idea of having the two male characters be the sons of Chief Brody, in an apparent desperate attempt to tie this one in with the first two, is really dumb. The odds that the Brody offspring would continue to get into situations that would involve killer sharks are quite low and the fact that they do makes the family seem like they’re affected by some sort of curse.

The storyline dealing with Brody’s younger brother Sean (John Putch) who comes to visit and his extreme fear of going into the water, due to is childhood trauma of the shark attack years earlier, is stupid too especially since he immediately goes into the water with the coaxing of bikini clad Lea Thompson. If his fear was that severe no woman, no matter how beautiful, would get him to go against it. Why even enter in this plot element if they’re just going to have him get over the problem right away? Why not put it to good use by creating a scene where Quaid is trapped in the water and relying on his younger brother to overcome his fear so he can jump in to save him and thus create tension with the viewer wondering whether he’ll be able to do it or not?

The shark attacks take too long to get going and then when they do they happen too quickly. The 3D effects, like having a severed arm floating towards the viewer, are cheesy and not scary at all. Although with that said, the brief sequence showing a man being eaten by the shark from inside the shark’s mouth is pretty cool and the only reason that I’m giving this film any points at all.

I also found the entire cast, and their benign side-story issues, to be completely boring. The viewer is supposed to have some concern for the welfare for these individuals, but I had none. Simon MacCorkindale is semi-colorful and gets thrown in to act as a potential jerk to the rest, but this doesn’t get played-up enough.

I had a lot of issues with the climactic sequence too. For one thing it features the cast standing inside an underwater control room watching the shark coming at them through the glass window causing them to simultaneously scream at the same time, but it’s shown in slow-motion making it come off as corny and unintentionally funny. My biggest beef though is that the shark is able to burst through the glass without any problem. I’ve been to underwater aquariums and the glass that is used is of a much thicker variety than ordinary windows in order to withstand the water pressure and yet here the shark shatters it away in seconds like it was the same type of glass used for your living room window.

While a small cult in recent years has taken to this film it was lambasted quite justifiably by the critics upon its initial release with one calling it: “a cheese soaked ocean thriller with no evident reason to exist.” The film’s opening weekend did quite well, but once the bad word-of-mouth got going the box office receipts dropped sharply. Don’t be fooled by seeing Richard Matheson’s name listed on the screenwriting credits either. All he did was supply an outline, which he insisted got heavily revised later on by script doctors. He also labeled the final product, once he finally saw it, as a “waste of time”. 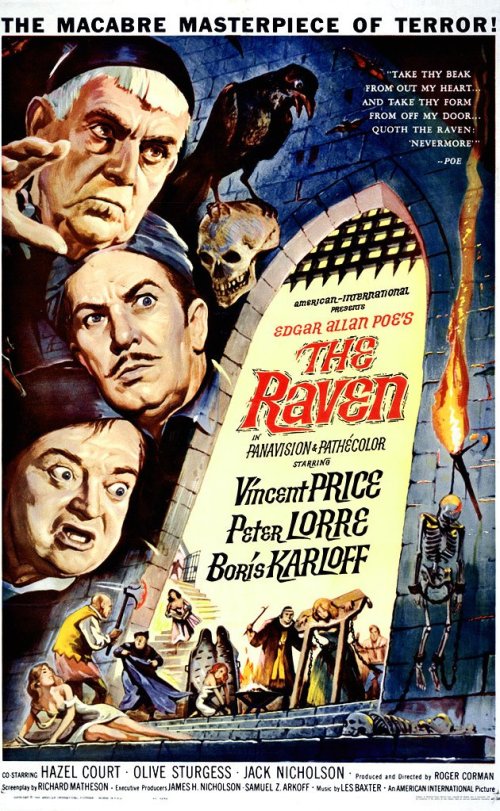 4-Word Review: The search for Lenore.

Dr. Craven (Vincent Price) is a former sorcerer who one night is visited by a talking raven. The raven is actually Dr. Bedlo (Peter Lorre) who has been turned into a bird by the evil Dr. Scarabus (Boris Karloff). Craven manages to concoct a potion that allows Bedlo to turn back into his human form and in appreciation he tells Craven that he has seen Lenore (Hazel Court), who Craven was once married to and was thought to be dead, living with Scarabus in his castle. Craven decides to pay Scarabus a visit to see if this is true and brings along his daughter Estelle (Olive Sturgess) as well as Bedlo and Bedlo’s son Rexford (Jack Nicholson). When they arrive they are greeted by the conniving wizard who at first denies any wrongdoing, but it soon becomes clear that he is jealous of Craven’s powers and wants to attain them for himself, which leads to a climactic cosmic duel between the two sorcerers.

This film marked the fourth collaboration between writer Richard Matheson and director Roger Corman and for the most part it is an entertaining success. The two apparently had so much fun creating the comic story of ‘The Black Cat’ in Tales of Terror trilogy that they decided to do a feature length horror/comedy that is very loosely based on the Edgar Allan Poe poem. Despite being shot in only 15 days the film isn’t as limited by Corman’s usual low budget constraints and I was genuinely surprised how imaginative the special effects where and the overall impressive background sets.

The film’s biggest boost is clearly the three lead actors who are all at their absolute peak. I especially enjoyed Lorre who brazenly steals every scene he is in and ad-libbed many of his funny lines much to the consternation of his co-stars. In fact if Lorre wasn’t in this it wouldn’t have been half as enjoyable. A young Nicholson as his son is equally entertaining and the frosty relationship that the two characters have was apparently a carry-over from how they felt about each other from behind-the-scenes.

Some of the effects are clearly animated, which looks tacky and as the group arrive at Scarabus’ castle one can see that the place is merely a painting matted on the screen. The story also does have its share of lulls, but all of this gets forgiven by the climactic sorcerer’s duel, which is the film’s highlight.

4-Word Review: Menaced by a doll.

Interesting made-for-TV movie that first aired on ABC on the night of March 4, 1975. The film is broken up into three different horror stories all of which star Karen Black in different roles and all based on short stories written by Richard Matheson. Dan Curtis famous for producing the horror soap opera ‘Dark Shadows’ directs all three segments and even employs two actors from that series John Karlen and Jim Storm in small supporting roles.

The first segment is entitled Julie and features Black as a prim-and-proper college professor who gains the attention of Chad (Robert Burton) who is one of her students. Chad asks Julie out on a date and then drugs her drink, which knocks her out. When she is unconscious he takes revealing pictures of her and then uses these to blackmail her into continuing to have sex with him.

The ‘surprise’ twist on this one isn’t too interesting and full of a few loopholes. This also falls into the typical Hollywood treatment where an otherwise attractive woman with a great figure is labeled as ‘homely’ simply because she wears glasses and has her hair tied up into a bun. Although the storyline is surprisingly smarmy for the time period I still thought it was hooky that when he takes those ‘revealing’ pictures of her she is still wearing her clothes when most likely in reality he would have taken them off. The only intriguing element of this segment is the fact that Burton was married to Black at the time that this was filmed, so it was interesting to see them perform together especially since their union was brief and barely even lasted a year.

The second segment is entitled ‘Millicent and Therese’ and is the story of two feuding sisters both played by Black and their diametrically opposite personalities. It is interesting to see Black play such contrasting characters, but otherwise the story is weak and I had figured out the rather obvious twist of this long before it occurred and most others will too.

The final and most famous segment is entitled ‘Amelia’ and is about a woman who buys an African Tribal doll for her boyfriend. The doll is a miniaturized replica of an ancient hunter complete with a spear and outfit. A gold chain which is around the doll supposedly holds in its evil spirit, but when that chain falls off it begins attacking Amelia who then desperately tries fighting him off while all alone her apartment.

While the idea of such a small doll with its tiny little arms being able to stab someone let alone turn doorknobs or bend the bolt of her door so she can’t get out seems a bit silly and absurd the action is still effective. Curtis’s use of dolly shots showing the camera zooming through the apartment at knee level in an attempt at displaying the point-of-view of the attacking doll is excellent. Despite the simple special effects they still work and the scariest thing about the doll is the weird chanting, hissing sound that it makes. The final image of this segment is quite possibly the most memorable of the entire film.

The only real suggestion I would have with this story is that it would have been nice to have shown the scene where the Amelia character goes to the shop and actually purchases the doll and shown more of a reason, or motivation for wanting to buy such a strange object in the first place.

21 years later Curtis made a sequel called ‘Trilogy of Terror II’ although that was not as well received. This film though is still enjoyable and well above average for TV-movie fare.