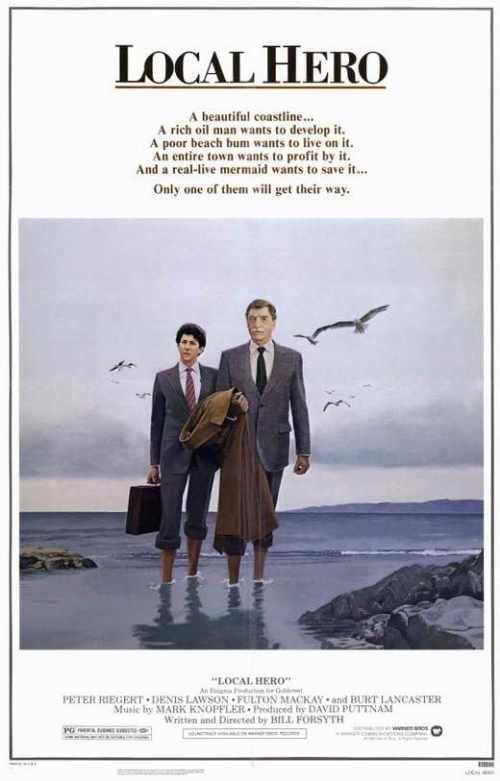 Mac (Peter Riegert) works for a gas company out of Houston, Texas that wants to buy up the small town of Ferness, which sits on the north shore of Scotland and turn it into an oil refinery. It’s Mac’s job to travel to the town and offer the citizens a generous monetary offer to sell their homes. He is not excited about going as he enjoys doing business over the phone, but once there he grows attached to the more laid-back pace. The townspeople grow found of Mac as well and eager to take the money and become rich. The problem is that through research they find that it is actually Ben Knox (Fulton Mackay) an eccentric man who lives in a ramshackle house on the beach who owns the land and he is unwilling to sell no matter what the price.

This film received positive reviews at the time of its release and one of the few movies to get a 100% positive rating at rotten tomatoes and yet after watching this now twice I’m still mystified over what all the fuss is about. When I first saw it several decades ago I came away feeling like I had just viewed something where very little happens and upon the second viewing I felt the exact same way.

I get that the emphasis is supposed to be on the quirky humor and that’s fine, there’s even a few chuckles, but the script flat lines after its initial set-up.  The eccentric characters and offbeat quality becomes one-dimensional and the story offers no true conflict or tension. Everything gets handled in such a subtle, dry way that there’s barely any drama at all and seems not really worth the effort to watch.

It would’ve worked better had there been one true antagonist, somebody that would be in stark contrast to everybody else and create genuine upheaval to the otherwise benign complacency. Initially it seemed that Lancaster’s character, who owns the oil refinery, would be a perfect foil to the serenity. Most business owners are consumed with the profit margin, but this one is instead more interested in astronomy. I realize that writer/director Bill Forsyth wanted to work against the grain and not portray the typical caricature of a hard-driven business man, but how can a guy run a successful business if the financial bottom line isn’t his main drive? Making the business owner a lovable kook as the rest takes away any potential confrontation of which this movie could’ve used some.

Riegert is equally transparent. His yuppie tendencies should’ve been played up more and his dramatic arch from big city businessman to lover of small town life more apparent. I was hoping that after he slowly became fond of the place that he would be one to throw the monkey wrench into the proceedings by refusing to make a deal and fighting to save the town even as the other residents are more than happy to leave it, which would’ve been much funnier.

The townspeople are blah too. The viewer only gets to know a few of them and they’re indistinguishable from the other. The only one that stands out is the lady with a punk look and I was intrigued to learn more about her and how she was able to get along with everyone else despite dressing in such a radical style and yet we never hear her utter a single word.

Ben Knox is the only character that offers a twist as we initially perceive him to be a homeless nobody only to realize that he ultimately holds all the cards and yet it just teases the viewer with a potential confrontation between he and the townspeople that never comes to fruition. I was also disappointed that we didn’t get to see the inside of his makeshift home that looked so rundown and precariously put together that you truly wondered what the interior looked like or how someone could survive living in it for as long as he does. Lancaster goes into the home to negotiate a deal with him and I felt the camera should’ve followed him in.

If you’re looking for lightly amusing comedy that goes down easy then you may take a little more of a liking to this. If you desire a movie with something more than just incessant whimsy then this flick will not suffice. 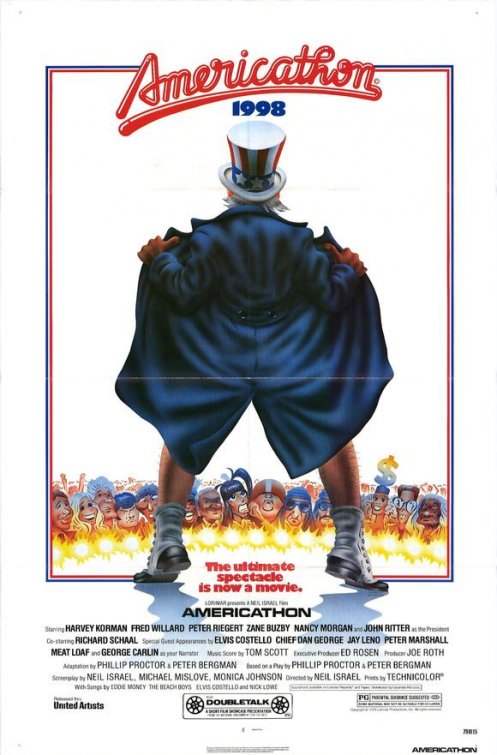 4-Word Review: Time for a telethon.

The year is 1998 and the nation is suffering from an oil shortage, which forces everyone to get around using bikes and roller skates while cars are now nothing more than immobile objects lived in by those with little money. Due to the energy crisis President Jimmy Carter and his administration are lynched by an angry mob and replaced by a young, new-wave type politician named Chet Roosevelt (John Ritter). Chet’s first order is finding a way to save the country from bankruptcy and he decides to do it by broadcasting a national telethon hosted by B-celebrity Monty Rushmore (Harvey Korman).

The film is based on a skit done by The Firesign Theatre, which was a popular satirical group that poked fun of the politics and issues of the day by performing live action stories with a stream of consciousness narrative. The group was made up of four men who wrote all of their material together and no line of dialogue, or joke was allowed to be included in their scripts unless all four of them agreed on it.

While much of what they did was original and cutting edge this movie fails to capitalize on it. I was confused as to what the intended focus of the parody was supposed to be on. It seemed to be aiming for light satire, but the references and potshots that it does take in connection to politics, television and celebrities are quite sterile and the film is in desperate need of more edginess.

The pacing is also quite poor. The characters are nothing more than broad caricatures and the plot too over-the-top to take seriously, so the emphasizes is clearly on the humor, but the jokes needed a rapid-fire delivery like in Airplane to work instead of gags that are so subtle and drawn out that you barely even notice them.

The casting is off too. John Ritter is an engaging actor, but here he displays no energy at all and comes off like he’s been tranquilized with some sort of drug. Harvey Korman is talented in a sketch comedy setting, but annoying as a lead. The film seems to be aiming for the college crowd and 20-somethings, so why cast someone like Korman, who was in his 50’s at the time, and considered completely out-of-touch with that generation?

I did like Peter Riegert, who is appealing simply because he plays the only normal person in the cast, which should’ve been enough reason to give him the most screen time, which he doesn’t get, in order to help offset the misplaced ‘zaniness’ around him. I was also confused why George Carlin narrates the film instead of Riegert since he seems to be speaking through Riegert’s character.

Out of the entire runtime there are only two segments that are actually semi-funny. One includes a bit where Meat Loaf takes on a driverless car and defeats it like a matador battling a bull. Jay Leno plays a fighter in another segment who takes part in a boxing match against his own mother who continually taunts him by calling him ‘poopy butt’. Unfortunately everything else falls flat and nothing is worse than a comedy that thinks it’s being ‘hip’ and ‘edgy’ when it really isn’t.

Strangely both IMDB and Wikipedia list Cybill Shepherd in an uncredited role as the ‘Gold Girl’, which is very brief. Although the woman playing the part certainly looks and sounds a bit like Cybill I’m convinced that it really wasn’t her.