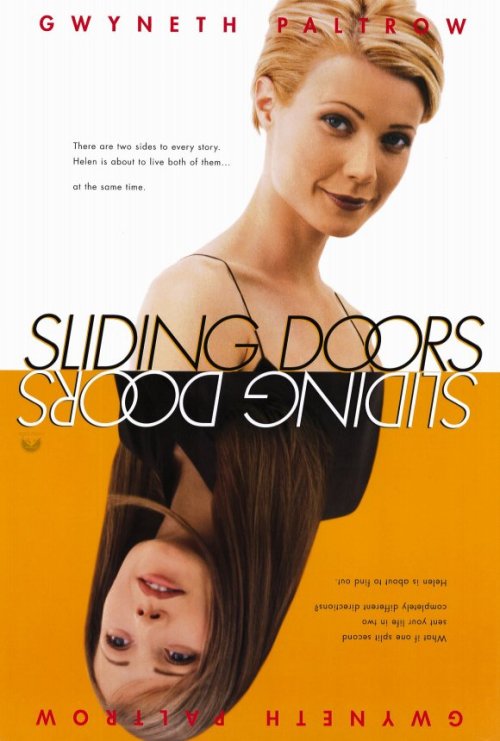 4-Word Review: Two scenarios in one.

This movie examines the life of a woman named Helen (Gwyneth Paltrow) who lives in a parallel universe. In one story she makes it through the sliding doors of a train and comes home to find her boyfriend in bed with another woman. In the second story she misses the train and does not find out about the affair.

The novelty keeps your attention for a while as the director Peter Howitt cuts back and forth between the two stories nicely. They evolve in interesting ways, but then instead of veering off into separate directions they start to come together until the one story ends up being pretty much like the other. This then negates the original idea altogether and makes it just another ‘chick flick’. The boyfriend Gerry (John Lynch) has to be one of the most pathetic out there. Not only does he have the audacity to have an affair on the beautiful and sweet Helen, but he does it while she is supporting him so he can sit home all day and write a book! He also seems to be unable to ever stand up for himself and he has a Hugh Grant type hairstyle that seems to only look good on Grant and nobody else. Jeanne Tripplehorn as the other woman is extremely cold and bitchy to the point that you wonder why anyone, even this twit, would want to have a relationship with her. Helen’s other love interest James (John Hannah) is charming in too much of a prepackaged sort of way and at times it seems to come off like he is a stalker even though that is not the intention. Also Paltrow ends up becoming afflicted with the ‘Ali MacGraw syndrome’ as she is shown lying in a hospital bed after a bad accident with no scratches or bruises and looking as beautiful as ever.

On the positive side Paltrow is really pretty to look at and speaks with an effective British accent, which takes a little getting used to, but she does it well. She sports two different hairstyles and looks good in both, but with the second one it starts to make her look exactly like Susan Dey from the 80’s TV-show ‘L.A. Law’.

The movie is fun for a while, even engaging, but eventually it throws in too many dramatic twists. The boyfriend is beyond pathetic and Tripplehorn, as his lover, seems to be running for bitch of the century.