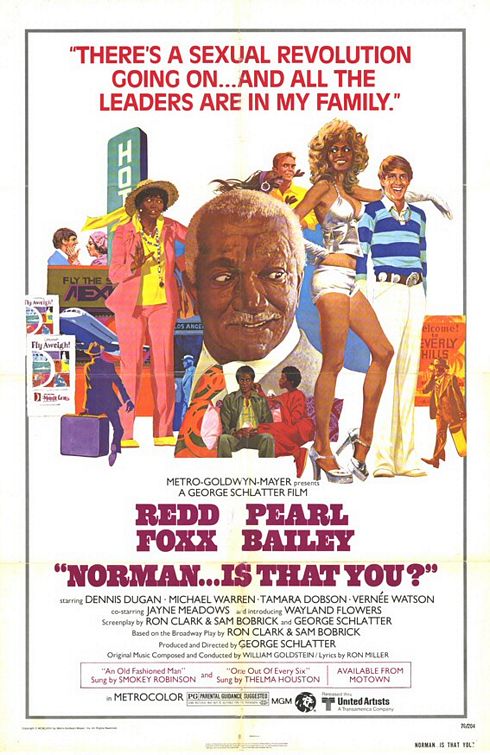 Ben (Redd Foxx) travels to L.A. to visit his son Norman (Michael Warren) after his wife Beatrice (Pearl Bailey) leaves him for his brother. However, unbeknownst to Ben Norman has come to terms with his closeted homosexuality and is now living with Garson (Denis Dugan). When Ben arrives unannounced Norman tries to keep his gay relationship a secret, but Ben eventually finds out about it and goes on a mission to have him ‘cured’.

The story was originally written as a play, but flopped and ran for only 12 performances in 1970. For whatever reason it was decided 6 years later to revamp the idea, but do it with a black cast instead. However, times have changed and most everything here seems quite dated. The Ben character could easily be considered homophobic by today’s standards and the gay jokes he makes seem out-of-line and even offensive.  The production, which was shot on video and then transferred to film, looks stagy and cheap with ‘the view’ of L.A.’s skyline that can be seen outside Norman’s patio door clearly being a painting. George Schlatter who is best known for producing the 60’s variety TV-show ‘Laugh-In’ makes his one-and-only cinematic directorial effort and is unable to overcome the script’s limitations.

Foxx is the only reason it is even slightly enjoyable. Just watching him walk around with his patented strut is amusing. However, the way he treats Garson simply for being gay is no longer considered funny and I felt the Garson character shouldn’t have put up with half as much as he does. Still, the part where Foxx dreams that he is a gay actor accepting the Academy Award is the film’s best moment.

Dugan plays up the flaming gay character relatively well, but Warren is a weak link as he says his lines like he is reading them off of a teleprompter and shows no emotion or variety of facial expressions. Having Bailey cast as Foxx’s wife seemed inspired, but the character gets wasted in trivial husband-and-wife arguments that knock this thing down to a TV-sitcom level. Jayne Meadows who appears as Garson’s mother is equally wasted and is in only one scene even though the character had great potential especially with the idea of setting her up on a date with Foxx.

There is enough comedic banter to save this from being a bomb, but just slightly. Although it is shown that the parents reluctantly come to terms with their son’s sexuality it still conveys the message that it is ‘okay’ to be openly prejudice towards the lifestyle, which likely could rub most of today’s viewers the wrong way.

4-Word Review: In over his head.

Elgar Enders (Beau Bridges) is a spoiled 29 year-old from a wealthy family who is still living at home with his parents in an affluent suburb of New York.  He decides it is time to ‘make his mark’ by purchasing a rundown building housing black tenants in inner-city Brooklyn.  He plans to evict the people and have the structure renovated into a posh flat.  He starts having second thoughts though as he gets to know the people and learns of their struggles.  He begins a relationship with one of the women (Diana Sands) and soon he is working to upgrade the building as well as trying to enlighten his racist, snobbish parents (Walter Brooke, Lee Grant) to embrace the black movement.

The Enders character is a perfect microcosm to the 70’s period where idealism and efforts to improve inner-city life, as well as some of the harsh realities that came with it, where at an all-time high.  Director Hal Ashby’s first film is full of strong gritty visuals from the rundown, graffiti-laden buildings to the garbage strewn lawns. Everything was filmed on-location and you get a vivid taste of the black experience. It is boosted even more by the detailed cinematography of Gordon Willis, which makes the most of the natural lighting and making you feel like you are right there.   The honest no-holes-barred approach is terrific. It perfectly captures the mood and feel of its era. I was surprised for a first time director, even a really good one like Ashby,  how well-constructed and technically sharp this was, which could have some link to the fact that it was produced by another great director, Norman Jewison, whom I’m sure lent a lot of input.

Initially I found the Elgar character to be off-putting, but that could’ve been intentional.  We first see him sitting on his lawn chair being served a drink by a black servant while talking about his great plan and looking like a spoiled, snot- nosed kid who has been coddled all his life.  The one scene that I remembered from this film when I first saw it over 20 years ago is when he  gets out of his Volkswagen bug to look at the building while wearing a tacky looking Pat Boone white dress suit.  When some of the black men sitting on the building’s front steps tease him a little, he immediately panics and runs eight blocks down the street in terror even though no one was chasing him.  However, he does start to grow on you as the film progresses.  I liked the fact that he faces adversity and is not scared away.  He learns to persist and adapt.  He genuinely starts to care about the people and backs-up what he says to the extent that he single-handedly carries new toilets one-by-one from the hardware store to the apartment building when the plumbing breaks down in an amusing vignette.  He isn’t afraid to tell off his arrogant parents when he needs too and his definition of NAACP is pretty funny.  It is satisfying to see him mature, learning that instituting change is not easy and things are the way they are for a reason.  He eventually is forced to confront his own limitations, but becomes a stronger person for it. This is without a doubt Bridges best performance to date.

There are other great performances as well.  Pearl Bailey is a gem as one of the building’s feisty, older women tenants who is the first to befriend Elgar.  Her awkward visit with Elgar’s equally feisty mother is considered the film’s highlight by many viewers and critics. I also loved the look she gives Elgar at the very end when he tries to wave goodbye to her.  The gorgeous Diana Sands is outstanding playing the role of Francine who has an ill-fated affair with Elgar. She shows just the right balance of sexiness and seriousness and it was a shame that just a few years after this film was made she ended up dying of cancer at the young age of 39. Susan Anspach is fun in one of her early roles as Elgar’s pot smoking sister.  The performance though that leaves the strongest impression is that of Lee Grant who is hilariously hammy as Elgar’s priggish mother.

When I first saw this film I came away thinking that it was uneven and a bit bipolar. It runs most of the way as a gentle, quirky satire filled with goofy cutaways, but then ends with a very stark and frightening scene with Elgar being chased down the grimy hallways of the building by Francine’s angry ax-waving husband (Louis Gossett Jr.) when he finds out that Elgar has gotten his wife pregnant.  The scene is ugly and intense and a far cry from the rest of the film’s gentle tone. Yet upon second viewing I think this scene works and was necessary. It makes a good statement at how volatile temperaments can be of those that are forced to leave in squalor as well showing how easily people, even with the best intentions, can get in over-their-heads when they don’t fully appreciate, or understand the situation that they are getting into it.

The side story involving a mulatto women (Marki Bey) who falls in love with Elgar is solid as well and gives the viewer a keen insight as to how difficult it is for someone who can’t seem to be accepted by either race. The language and conversations are tough and vulgar, but always laced with realism.

The only complaint I have with the film is the portrayal of the white characters who are buffoonish and overly idiotic even for satire.  I thought the idea of having them still use black servants was over-done, but then when one of them shows up at a party wearing blackface it was overkill. I thought it was unfair and unrealistic in the way that the film worked so hard to give depth to its black characters, but then turns around and, with the exception of Elgar, paints the whites as nothing more than broad caricatures.

The Landlord has finally been released on DVD through MGM’s Limited Edition Collection. I would suggest this film for anyone who enjoys an intelligent comedy-drama with something to say. It is also a great chance to see young up-and-coming actors. This includes Hector Elizondo as well as comedian Robert Klein. You can also get a very quick glimpse of Samuel L. Jackson who appears briefly in an uncredited role as a minister near the end.

Posted in 70's Movies, Comedy/Drama, Movies Based on Novels, Movies that take place in the Big Apple, Obscure Movies, Satire