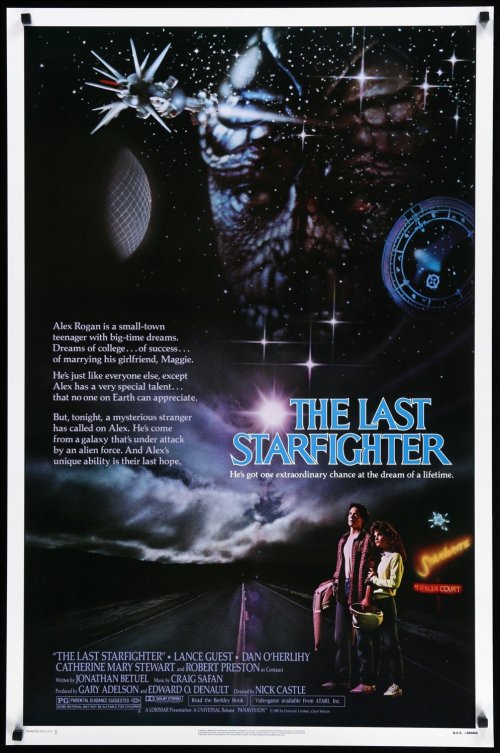 Alex (Lance Guest) spends his time playing an arcade game called ‘Starfighter’ and gets so good at it that he becomes the game’s highest scorer. He’s then approached by the game’s inventor, Centuri (Robert Preston), to take a ride in his  futuristic-looking car as a prize. Alex accepts the invitation only to learn that Centuri really isn’t human, but instead an alien recruiting Alex to help them protect the frontier from Xur (Norman Snow) who has found a way to breach the forcefield that protects Rylos and the surrounding planets from invasion. The ‘Starfighter’ game was meant to be a test to find those that were good at the game and then bring them into the battle since the skills needed to win the game are the same ones needed for the battle.

While the film did quite well at the box office, bringing in $28 million from a $15 million budget, as well as spawning a novel version, a video game, and even an off-Broadway musical, I still found it to be a complete bore to watch. I don’t mind sci-fi, space-age movies, which were all-the-rage in the 80’s, but the special effects in this one are so tacky looking that I couldn’t take it seriously. This was one of the first films to use computer graphics instead of physical models, but the result makes this entire galactic war look like a video game. Maybe that was the intention, but I didn’t care for it.

The story, which was written by Jonathan R. Beutel while he worked as a cab driver, is full of too many plot holes. Having the setting inside a trailer park, which wasn’t even Beutel’s idea anyways, but instead director Nick Castle’s, is the only original thing about it. I didn’t understand though why all the people living in the trailer park would be so excited about Alex getting the high score in the game and come out of their homes to cheer him on. To them it’s just a silly kid’s game and becoming good at it doesn’t really mean much in the real-world, or lead to anything, so outside of an idle teenager with too much time on his hands, why care? It would’ve been more ironic had Alex achieved the high score with no one else around making him feel his efforts were under appreciated, only to later learn that in a far off galaxy it was anything but.

The way Centuri finds him, by literally driving up to him in the middle of the night in his snazzy car while Alex is conveniently walking alone is not interesting and this scenario could’ve been played-up in a more creative way by forcing Centuri to tour through the trailer park and visiting the many residents, which could’ve included some offbeat interactions, before he finally comes upon Alex. Also, why are these aliens forced to recruit a human teenager in their effort to save their own space fortress? Aren’t there other aliens within their own galaxy that could take-up the cause? What’s in it for Alex to get involved and put his life on the line for some distant, separate universe that he has nothing to do with and won’t directly affect his life in any way should these planets get invaded? The idea too that only two individuals, Alex and his alien pal Grig (Dan O’Herlihy), can take on this massive army and win are long odds that would only make sense in a cheesy Hollywood movie.

Guest was not the right choice for the part either as he was too old, playing a teen when he was already 23 at the time of filming and looking it. The part should’ve been played by a 12-year-old especially since the storyline is at a bubblegum level that only a preteen would be able to buy into. Preston is certainly a great actor, but I didn’t understand why his character felt the need to wear a human mask to disguise his alien face when all the other aliens freely showed who they were. It’s disappointing too that Norman Snow, who gives an campy performance as the villain, disappears too soon, but I really did like O’Herlihy, who’s completely unrecognizable underneath all of the make-up, and the only thing that makes watching this dopey thing slightly worth it.

The one aspect of the plot that is amusing is the Beta Alex that’s put in Alex’s place to help disguise that the real Alex is missing. These scenes, where the Beta learns to adapt to the human culture in awkward ways, are the only original bits in the film and where filmed after production had already finished when test audiences reacted favorably to the character forcing Guest to return to shoot the added scenes, but because he had already gotten a haircut by this time, the Beta Alex is then seen wearing a wig. Outside of these moments though I found the film to be pretty flimsy especially on the logical end and one of the weakest entries of the 80’s sci-fi craze.