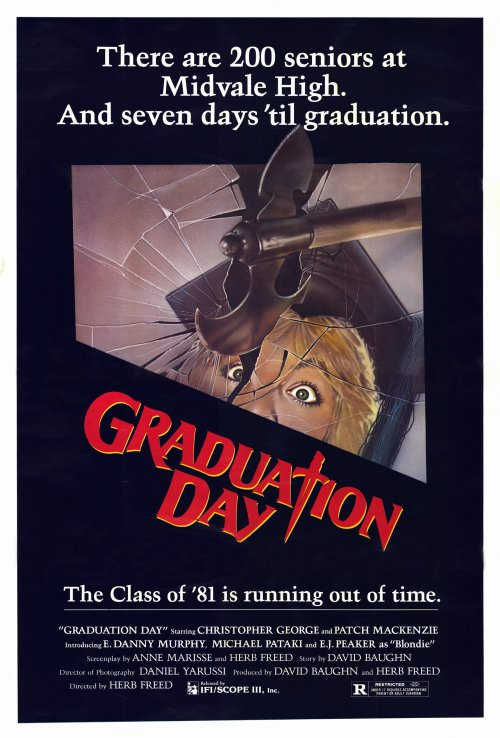 When the high school’s top track star Laura (Ruth Ann Llorens) collapses mysteriously after winning a race strange things start happening to her teammates. One-by-one they get knocked-off by a killer who has a way with swords, but who could it be? Her brash, driven coach (Christopher George) who pushes his players past their breaking point or maybe it’s her strange sister Anne (Patch Mackenzie) who comes back home from the military. The clues and suspects keep piling up, but can the police find the culprit before the entire team gets killed?

Writer Anne Marisse and director Herb Freed teamed up four years earlier to make the very original one-of-a-kind horror film Haunts where they created an excellent atmosphere on a nickel-and-dime budget that is completely lacking here. The scares and suspense even on a cheap level is non-existent. What is even worse is that there is no central character just a mishmash of uninteresting people and scenes that does not help to create any empathy from the viewer nor story momentum.

Freed’s direction is lively to some extent as he does inject some humor and a couple moments were he uses quick flash editing, but his other camera work is off-putting. I particularly got annoyed with a tracking shot showing a person running alongside a moving camera that seemed to make them look like they were on a treadmill, or going unnaturally slow in order to not outrun the camera. This is done several times throughout the film with different characters and the result is very artificial looking. He also features a band named Felony that sings a long seven minute song called ‘Gangster Rock’ that almost turns this thing into a music video. A scene showing a woman being chased by the killer is intercut between the band playing and this takes the viewer out of the film completely and kills what little suspense there already is.

The killings themselves are unimpressive. The scene showing a victim getting beheaded looks too much like it is a mannequin and it is highly doubtful that any sword could make that type of precise and quick cut. Another death features a pole- vaulter  being impaled by a mat full of sharp spikes, which is pretty much ruined when we can clearly seeing that the victim is still breathing even as he lays there with the spikes having gone right through him.

There is logic loopholes as well including having the killer store the Laura’s dead body inside his bedroom and pretend she is still alive, which is too reminiscent to Psycho to be effective or interesting. I also didn’t know how somebody could dig up a dead body from a cemetery and not have the victim’s family, or the cemetery workers not notice. The make-up used to try to make her appear decomposed instead made her look more like she was a member of the KISS rock group.

Michael Pataki hams it up nicely as the school’s beleaguered principal and becomes a scene stealer in the process. Christopher George is so irritable and belligerent with anyone who makes contact with him that he becomes fun as well. Linnea Quigley has a nice topless scene as the horny Delores and Virgil Frye who is the father of Soleil Moor Frye of Punky Brewster fame has a few goofy moments as the school’s incompetent security guard. The funniest though is Patrick Wright as a grungy, overweight truck driver who feels that he is entitled to take liberties with Ann who is returning home from the service simply because he is a ‘taxpayer’.

Sources list Vanna White as the character of Doris, but I didn’t spot her and I don’t feel like going all the back through this cardboard thing again just to see if I can. 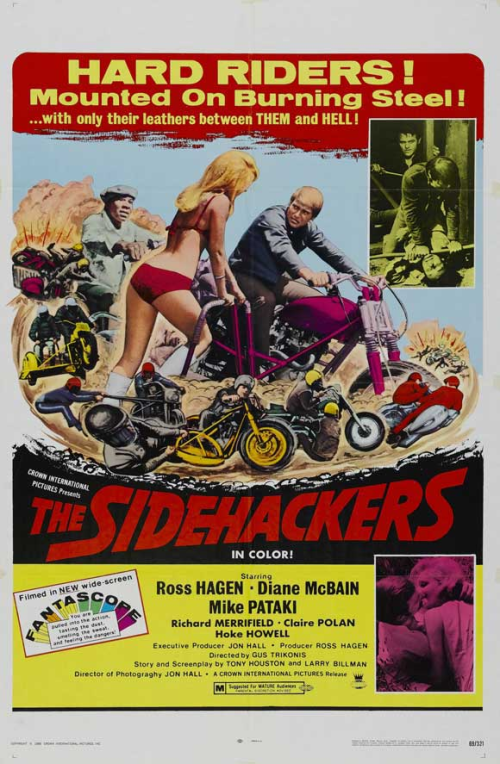 This low budget flick is probably best known as having aired on an episode of the old ‘Mystery Science Theater 3000’ TV-show. At the time the writers had not watched the movie all the way through before deciding to use it for the show and when they came upon a rape sequence half-way through it they had to edit it out and have Crow  simply explain that the character was now dead. It is also famous for being directed by Goldie Hawn’s then husband Gus Trikonis. In fact Goldie auditioned for one of the parts in the film, but since she wasn’t well known at the time she got turned down.

The story centers around Vince (Ross Hagen) a motorcycle racer involved in the sport of sidehacking where a passenger rides along in a sidecar connected to the motorcycle and uses his body weight to help steer the bike around curves and turns.  The psychotic J.C. (Michael Pataki) watches the sport and wants to work with Vince, but Vince becomes aware of J.C.’s volatile personality and turns him down. This angers J.C. and later when his girlfriend Paisley (Claire Polan) falsely accuses Vince of having tried to rape her J.C. flies into a rage. He and his men attack and beat up Vince and then rape and murder Vince’s girlfriend Rita (Diane McBain). Vince then spends the rest of the film trying to track down J.C. and getting his revenge.

The only diversion of this otherwise run-of-the-mill drive-in drama is the scenes involving the racing, which is better known as sidecarcross. Trikonis captures the racing in vivid style giving the viewer a good feel of the sport. Personally I thought it would be excessively dangerous for the passenger who puts himself into a very vulnerable position as he tries to steer the bike from the side and could easily fall off, or be hit by the other bikes that zoom around him. The shots of the crowd seem to show them as really being into it, but I felt that after watching it for a few minutes it would get monotonous.

With that said it is still the most interesting aspect of the film and I felt the story should have revolved around it. For instance having J.C. try and sabotage one of Vince’s races, but instead the racing scenes are shown only at the beginning before devolving into just another stale and redundant revenge drama. The dialogue is stilted, the characters bland, and the direction lifeless. Boredom quickly sets in and never goes away.

The music score is particularly horrendous. With the exception of the final fight scene when it does have a nifty psychedelic quality it is very sappy and terribly harmonized. Hearing it played over shots of Vince and Rita frolicking merrily through some open fields may be enough to make some viewers gag.

Pataki gives a good intense performance as the psycho and at times goes a bit over-the-top, but with this type of production that can only help it. The rest of the acting like everything else seems amateurish. If you want to seek this film out simply to catch the scene that was cut from the TV broadcast I would say it isn’t worth it. The sequence is not all that graphic and it is shown only as a flashback, which takes less than a minute.