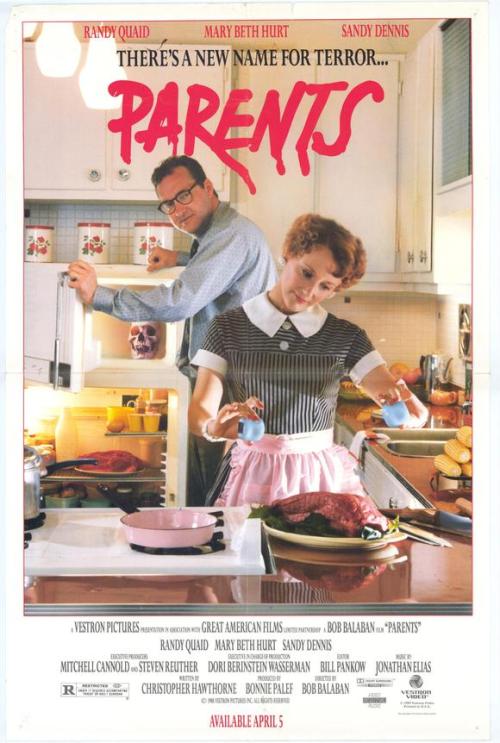 4-Word Review:  Are his parents killers?

Young 10-year-old Michael (Brian Madorsky) begins to think that his ‘perfect’ and wholesome parents (Randy Quaid, Mary Beth Hurt) are psychotic murderers and that the meat they are cooking on their backyard grill may actually be human.

Unlike some of the other silly B-horror films from the 80’s era this one doesn’t just play it for laughs. There are some genuinely creepy undertones including a scene where the boy imagines himself falling into a giant pool of blood. The killings are also all done in slow motion, which is pretty cool and the film photographs food in such a way that it will make you hungry.  The movie also keeps the viewer guessing as to whether the parents are really killers or it is all a part of the boy’s already overactive imagination.

Sandy Dennis is given a supporting role that is much too undistinguished for an actress of her caliber and yet she is still able to make the most of it. She has a real nice stylishly short and curly haircut and she looks probably better here than she ever did. It is almost hard to fathom that just three years later she would be dead and this would be her second-to-last movie.

The kid is the one who actually ends up being creepier than any of the adults and it is no surprise that he never acted in anything else. He has a real big gloomy pair of eyes and blurts out strange things and mumbles them in a way that makes him hard to understand.

I felt for the most part that actor Bob Balaban’s directorial debut was imaginative and interesting, but there are certain elements that could have been played up more. The most infuriating thing though is the fact that it never makes it clear whether the parents really were killers or it was just made up.

On the whole the film has a little bit more going for it than most B-horror films from the 80’s and it does manage to keep you guessing. However, the nebulous ending is frustrating and the child actor playing the part of the kid is not a very good performer and at times even annoying.