Governor Baxter Thwaites (Michael Caine) runs the British Colony island of Cascara a largely peaceful place that is mostly ignored by everyone else. Then one day one of the oil rigs on the island taps into a underground reservoir of water that has all of its impurities already removed. The delicious tasting drink, that can also be used as a laxative, becomes much sought after from bottling companies across the globe. Now suddenly the British government wants everyone on the island to move out and find some other island to live on while taking over and turning this one into a profit making venture.

The film is patterned after many British satires of the 50’s through the 70’s like The Bed Sitting Room and O Lucky Man that mixes in wacky characters with absurd comic scenarios and also trying to make sharp political observations in-between. Unfortunately this film, which is based on a story by Bill Persky who appears briefly as a TV director, goes soft and is too similar in its vapid tone to Persky’s other social satire flop, Serial, which came out 5 years earlier. The message is too ambiguous and the plot too cluttered with insignificant characters that it becomes almost nonsensical.

The characters are so eccentric that the viewer cannot identify with, or care about any of them. The film in a way comes off as almost racist since the island is populated with black people, but the main characters are all white while the blacks folks get completely pushed into the background. If anything the viewer could’ve sided with the islanders and their quest to protect their homeland, but since all focus is put on the British people who control them, that never happens.

The eclectic cast is the only thing that somewhat holds it together. Brenda Vaccaro, who normally plays in dramatic roles, is very funny as Caine’s feisty wife although I could’ve down without her misguided accent. Valerie Perrine, with her clear blue eyes is fun too as an idealistic social activist although she was already in her 40’s at the time in a role which would’ve been better served by someone in their late teens or early 20’s.

Caine on-the-other-hand isn’t all that entertaining with the exception of the scenes showing him wearing a cocked hat, which are amusing.  He at least seems more comfortable here than in Blame it on Rio, which he did the same year as this one, but due to the subject matter in that one he clearly looked quite awkward and stiff while here he’s having a fun time even if the audience really isn’t.

This also marks the last feature film appearance of Leonard Rossiter, who died in his dressing while waiting to go on stage in a play he was in just a few months after completing his filming here. Normally he’s enjoyable to watch even when he’s playing a stuffy character, which is what he usually did anyways, but here he’s too much of a jerk and I did not find him to be humorous or interesting in any way.

If there is one person that ultimately does comes-off best it would be Billy Connelly who’s hilarious as this rebel leader who refuses to speak and instead communicates everything through singing. Dick Shawn is also quite good as this arrogant actor whose career has declined and now forced, much to his dismay, to being a spokesperson for informercials. You can also spot Joyce Van Patten very briefly in an uncredited role as a TV news reporter.

George Harrison, who also produced the film, appears near the end playing the bass guitar in front of political leaders at the UN while Ringo Starr handles the drums and Eric Clapton does the vocals, but the movie would’ve been more entertaining had all three of them been given roles to play, or at  least it couldn’t have hurt. The film’s title is a bit misleading too as the water ultimately has nothing to do with what saves the island from takeover, or allows them to keep their independence.

Joe Baker (Dean Martin) is an aging bandit looking to do “something big”. He becomes aware of a hoard of treasure being hidden inside a church that sits just across the border and safely guarded by a throne of Mexican bandits. Joe figures that to be able to overpower them he’ll need a Gatling gun and turns to black market dealer Jonny Cobb (Albert Salmi) who agrees to sell him one in exchange for a woman as he’s been without the company of one for “too long”. Joe then begins robbing stagecoaches in a mission to find a woman attractive enough for Jonny’s tastes. After several attempts he finds one who just happens to be the wife of the cavalry colonel (Brian Keith) who then goes on a mission to rescue her while attempting to put a kibosh on Joe’s plans.

This is another film that was given a ‘bomb’ rating by Leonard Maltin that I didn’t think was all that desrved. It’s certainly no classic but James Lee Barrett’s script if full of dry humor and offbeat touches that manages to keep things consistently amusing. Some of my favorite bits include Martin traveling around with a small pooch in his saddle pocket, or his horse having gold crown teeth. Don Knight as his Scottish travel companion Tommy who carries his bagpipes with him at all times and will even occasionally play them as they enter new frontier towns is funny too.

Keith is spot-on as the slightly stuffy colonel who is stuck with incompetent underlings and just wants to move on with his impending retirement in peace, but can’t. His facial expressions alone are terrific and he gives a far more nuanced performance than co-star Martin and should’ve been given top billing.

The climax features some nifty gun action including seeing Martin use his Gatling gun to shoot down the bandits in domino-like fashion, but for the most part the script is too leisurely paced and in desperate need of more confrontation and elaborate scenarios. Marvin Hamlisch’s soft-rock score is out-of-place for the time period and the theme song sung by former Paul Revere and the Raiders front man Mark Lindsey doesn’t have any type of western feel to it. I also got tired of hearing the phrase “something big” mentioned over and over again. Initially it seemed cute and clever to repeat the film’s title in the dialogue, but it eventually goes overboard. 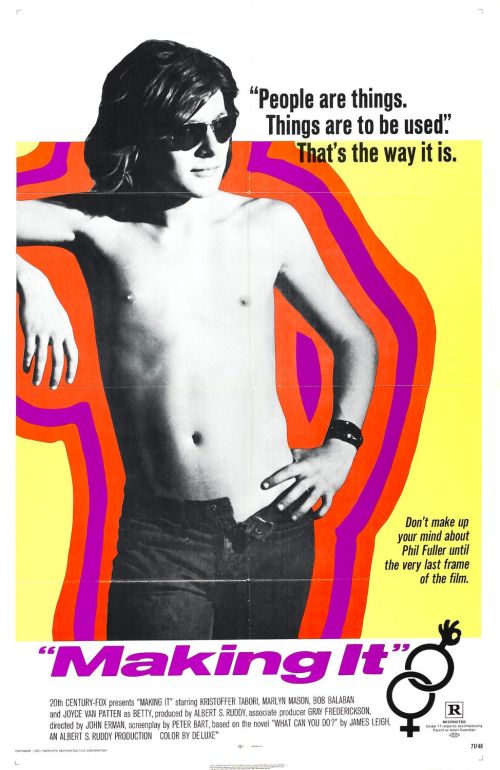 Phil (Kristoffer Tabori) is a cocky, self-centered teen who uses his good looks to get practically any girl he wants into bed with him. He even has a fling with the wife of his basketball coach, but when he thinks he has gotten one of them pregnant things begin to spiral out-of-control especially when his emotionally fragile mother (Joyce Van Patten) starts to have some ‘problems’ of her own.

Peter Bart’s script, which is based on James Leigh’s novel ‘What Can You Do?’ has some incisive comments, but surprisingly it’s more on being middle age than adolescence. It shows with a depressing clarity what a thankless, pain-in-the-ass the middle age years can be and how people at that stage secretly wish to go back to their teens if only to experience for a fleeting moment the carefreeness and idealism once again.

The on-location shooting done at West Mesa High School in Albuquerque, New Mexico nicely captures the gorgeous, crystal blue skies of that region. The students are made up of actual teens that look and behave very much like teens of today. However, John Erman’s direction is lackluster and flat. Everything is shot in a conventional, unimaginative way with a pace that is slow and only manages to improve towards the end when it becomes dramatic.

Phil’s spirited debate with his English teacher, played by Lawrence Pressman, is engaging as is a rebellious student played by Bob Balaban arguing with his beleaguered principal (David Doyle) about his right not to have to stand at attention during the pledge of allegiance. The film is also famous for the novelty of casting real-life siblings Dick and Joyce Van Patten as lovers and includes a sequence showing him kissing her on the mouth, which had to be awkward to perform let alone rehearse.

Tabori, who is the son of actress Viveca Lindfors and Dirty Harry director Don Siegel shows an impressive amount of composure and maturity for such a young age, but I wasn’t so sure I liked the sound of his voice. Louise Latham, who plays the mother of the girl Phil thinks he might have impregnated, is memorable and had her part been just a wee bit bigger she would have easily stolen the whole thing. She is also involved in the film’s funniest moment where she asks Phil for some weed and thinking she doesn’t know “grass from her ass” he decides to take a regular cigarette, roll it up like a joint, light it and then let her smoke it where she  ends up getting a ‘high’ anyways.

The film’s staple though is its twist ending that is genuinely shocking and most likely to leave even the most jaded viewer’s mouth agape. It could’ve been played out a little more, but remains nasty nonetheless and it’s something you’re guaranteed not to see in any other movie. It is also the one thing that gives this otherwise undistinguished teen flick a kick and probably explains why it has never been released on either VHS or DVD nor ever shown on broadcast network television.