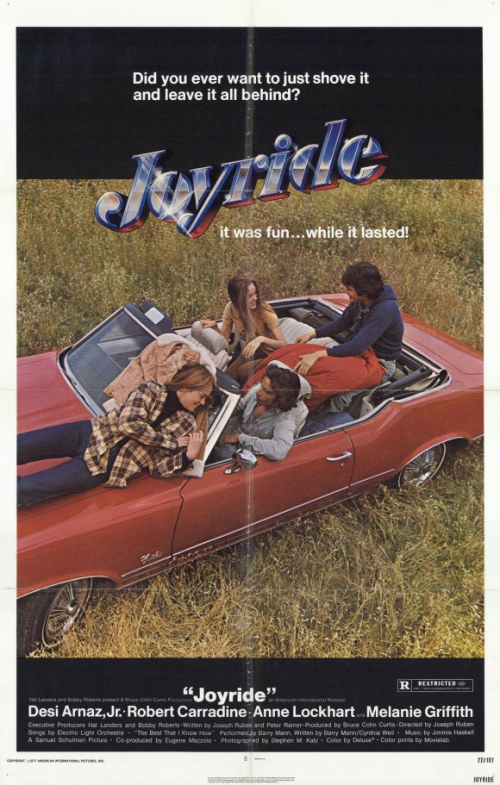 Scott (Desi Arnaz Jr.) is bored with his job and finds that his friend John (Robert Carradine) is too. With John’s girlfriend Susie (Melanie Griffith) in tow they decide to drive up to Alaska where they hope to get jobs on the pipeline. Unfortunately they end up facing a lot of unexpected problems and eventually are forced into robbery with the Canadian Mounted Police hot on their tail.

The film was written and directed by Joseph Ruben who later went on to do much better things, but this isn’t too bad for the most part. It has a good pace without any of the static drama or wooden dialogue typical with these types of features during that era. The situations are for the most part believable and mildly engrossing. The film also features two very unique scenes including that of a genuine pissing contest, which John wages and wins with some fellow bar patrons and a scene where the trio is forced to eat dog food that by the looks on their faces seems to have been the real thing.

Unfortunately the film tends to ramble and takes a lot of predictable dramatic twists while failing to add any new perspective to it. The characters seem ill-prepared for many of the expected problems that they face, which any sensible viewer could’ve predicted would happen from the get-go. It’s also unrelentingly downbeat. I was expecting a little more frivolity and humor, which could’ve helped and I also thought it was unrealistic that every person they meet in the town turns out to be corrupt, conniving or mean.

It’s interesting to some extent to see the next generation of baby boomers or those who were too young to get involved in the protest movement during the 60’s, but still trying to carry on the counter-culture torch during the mid and late 70’s. The four leads are all offspring of famous celebrities, which is the film’s one true novelty and I couldn’t help but wonder while I viewed this what their presumably more conservative parents must’ve thought while watching their kids in this playing characters that are quite jaded and with no shortage of sex, nudity and cursing.

Arnaz Jr. is the weakest link and quite transparent while lacking the charisma needed for a lead actor. Carradine is good and it’s nice seeing him not playing a nerd type. Griffith is cute and there’s even a glimpse of her bare bottom during one segment when she flashes some passing motorists. The most dynamic performance though goes to Anne Lockhart who appears later on and acts as a love interest for Scott. Her character is sassy and real while helping add some needed dynamics and it’s a shame she didn’t stay for the entire duration.

The second half where they decide to rob the payroll department and then go on a mad car chase across the northern Canada has a few fun moments. Unfortunately the viewer is left hanging as we are never shown if they ultimately get away or are caught, which is frustrating and ends up being a cop-out of the highest order.