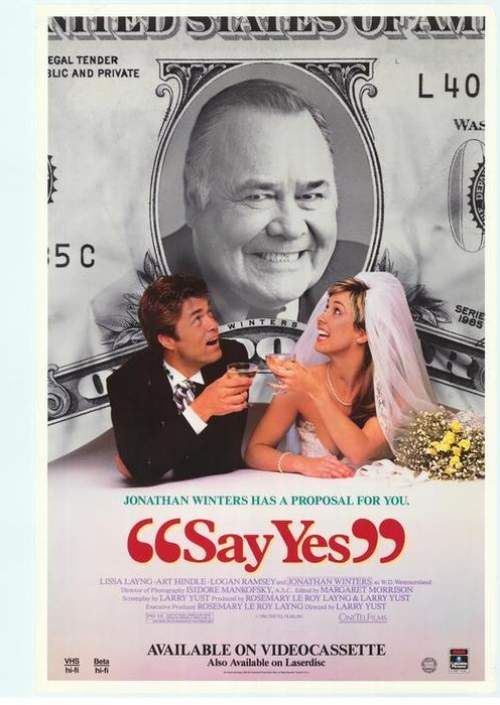 4-Word Review: Marrying for the money.

Luke (Art Hindle) is set to receive a very large inheritance from his recently deceased grandfather (Jonathan Winters) who was the owner and founder of a prosperous toy company. The problem is that the will stipulates that he must marry within 24 hours, or the money will go to his father (Logan Ramsey) instead. Luke isn’t even dating anyone and so he must immediately go looking for a virtual stranger who’s willing to marry him on-the-spot simply for the profit. He finds that person in the form of Annie (Lissa Layng) who is a country girl visiting the big city and who Luke finds to be more down-to-earth than his other past girlfriends who now want to marry him simply so they can get their lecherous hands on his newfound fortune, but as they move ahead with their impromptu wedding his father tries everything in his means to put a stop to it.

Writer/director Larry Yust rose to some prominence in the film scene with his controversial film short The Lottery, which was based on the Shirley Jackson short story about a small town who stones one member of their community each year after their name gets randomly picked from a lottery. He followed it up with the Blaxploitation favorite Trick Baby and after that the offbeat horror flick Homebodies. While none of these films were masterpieces they still showed flair and creative potential, so why he would end up helming this dud, which is his last film to date, is a mystery, but the humor in this thing is excessively lame and the storyline utterly ridiculous.

Hindle makes for a very transparent and bland lead, but my real qualm came from his costar Layng who is a complete turn off in every way. I really hated her rural sounding accent and her phone conversation with her mother, who has even more of one, gets particularly annoying. Why Luke would choose her at random and become so very attached to her so quickly when a horde of other woman are chasing after him is never made clear and doesn’t make much sense.

Winters is the only good thing about this otherwise forgettable flick and it’s a shame he wasn’t made the star, but his ad-libs actually manages to elicit a few chuckles and what he does with his tongue at one point is rather obscene looking. I also enjoyed Logan Ramsey as his son even though in real-life he was four year older than Winters.

A slightly surreal segment where they go into a factory where workers are conditioned to crack open eggs in unison, which eventually leads to an egg throwing fight is the film’s one-and-only highpoint and even this isn’t much. I also got a kick out of the scenes with Anne Ramsey playing the part of a street preacher who tries to marry the couple first on the back of a speeding junk truck and then later while the three are floating in water with lifejackets on. 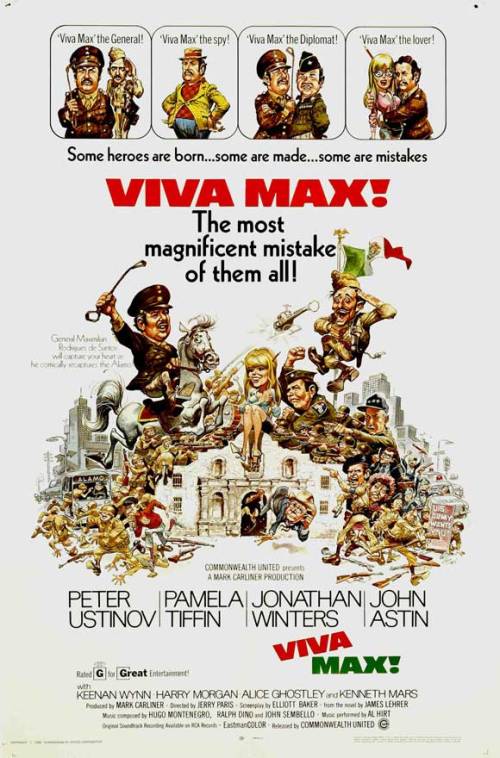 4-Word Review: Taking back the Alamo.

A small ragtag Mexican army led by the affable, but incompetent General De Santo (Peter Ustinov) decides to cross the border and recapture the Alamo. The process goes much easier than expected despite the fact that the army used no bullets in their guns. The National Guard is then sent in to weed them out, but they too decide not to load their guns with bullets leading to some unusual results.

The film is based on the novel written by PBS newsman Jim Lehrer and the movie’s behind-the-scenes politics ends up being much more interesting than the plot itself. Filmed in April of 1969 the production initially had permission from the state to film right on the actual site of the Alamo and a major portion was done there before various citizen groups became aware of it and began protesting the crew’s presence in what they considered to be sacred ground. Some of their protests was captured on film and incorporated into the story, but their loud presence eventually disrupted the production forcing some scenes to be done on an indoor studio soundstage while still others were completed in Italy.

The commotion and ‘controversy’ was not worth the effort as the film is an overall bore. The first 15-minutes are amusing and even mildly engaging, but once it gets inside to the actual Alamo the action and pace come to a screeching halt and kill any possible potential that the film may have had.

The script also has some illogical loopholes one of them being the army deciding to invade a place, but without using any ammunition, which is never explained and highly improbably. What is even more ridiculous is that the National Guard would decide not to use bullets in their guns either since this is the U.S. of A. where guns and force are considered a national birthright and thus makes this ill-conceived plot twist to be unbelievable to the extreme. The fact that De Santos and his men and able to freely leave at the end and go back to their country without dealing with any type of consequence for their actions is equally absurd.

Ustinov is funny and speaks in an authentic Mexican accent, but he’s unfortunately limited by the broad caricature of his role. John Astin comes off best as the Sergeant that’s second in command and does most of the actual disciplining and leading and Jonathan Winters is good as a clueless American general. Alice Ghostley lends some energy as an innocent bystander that becomes one of the army’s prisoners and Pamela Tiffin looks great wearing glasses and having her hair tinged in blonde.  Gino Conforti, Paul Sand, Jack Colvin, Anne Morgan Guilbert and Kenneth Mars can also be spotted in small roles, but even with their competent performances it fails to mask the film’s otherwise glaring inadequacies.

Posted in 60's Movies, Comedy, Movies Based on Novels, Movies for the Whole Family, Movies that take place in Texas, Obscure Movies