Hi McDunnough (Nicholas Cage) is a repeat offender who goes in and out of the state penitentiary. It is there that he meets Edwina (Holly Hunter) an officer in charge of taking his mugshot each time he gets rearrested for holding up convenience stores. Eventually the two form a bond and when he finally gets released they marry, but find that she’s unable to bear children. They then hatch a plan to kidnap one of the quintuplets of furniture store owner Nathan Arizona (Trey Wilson), but find this leads to more complications than they were prepared for.

While the Coen’s directing is sharp and on-target there were still those that criticized it as being overly stylistic and, as critic Vincent Canby stated, outside of the technical expertise the story has no life of it’s own, which is kind of true. The editing does give the film a personality, but there were times where slowing it down and allowing the scenes to breathe could’ve heightened the humor. For instance having Cage break into the Arizona residence to kidnap the baby happens much too quickly and there should’ve been a scene showing Cage trying to figure out which window to break into to get to the baby’s nursery as it was a big house, so how exactly would he have known where to go?

With that said there are still plenty of times where the distinct directorial touches spark the comedy and make it years ahead-of-its-time. I particularly liked the Coen’s patented camera tracking during Cage’s dream sequence where he views things from the bounty hunter’s (Randall ‘Tex’ Cobb) perspective as he rides his motorbike over obstacles on the front lawn and then supposedly straight into a bedroom. A chase sequence that starts out on the street and then winds up going through a person’s private residence is quite ingenious and the running-joke dealing Dr. Spock’s child rearing book is very funny too.

The script offers only caricatures, which would normally be a detriment, but here it just adds to the zaniness. I really enjoyed Wilson as the stereotypical aggressive, brash salesman and the scene where he talks to the police after the kidnapping has occurred I found to be the funniest moment of the movie. John Goodman and William Forsythe are also great as a pair of inept bank robbers and Sam McMurray and Frances McDormand are hilarious as the in-laws from hell.

My only real grievance, and it’s on a minor level, was the kidnap scenario, which could’ve been played-out more. I also thought it was weird that this rich couple would have all these kids and not hire a nanny to help them care for the babies. It’s a head-scratcher too that when Cage and Hunter decide to return the baby that they were able to break-into the same window that they did before. Wouldn’t you think that after a kidnapping this rich couple would’ve implemented crime alarms and cameras in ever room? Also, Nathan Arizona, catches the couple in the bedroom returning the kid to his crib and then after talking to them a bit he leaves the room with Cage and Hunter still with the baby, but you would think that after they took the kid once that the father would be too paranoid to ever leave the baby alone with them again.

The ending in typical Coen fashion doesn’t equal the same energy and imagination as the rest of the story and is a bit of a letdown. It deals with a dream that Cage has where he imagines having a really big family, but I thought it would’ve been funnier had the dream started out pleasant where he thinks about all the good things about family life only to have it slowly deteriorate into a nightmare where the harsh realities of raising kids come into play making him wake-up in a cold sweat and feeling lucky that they couldn’t have children after all. 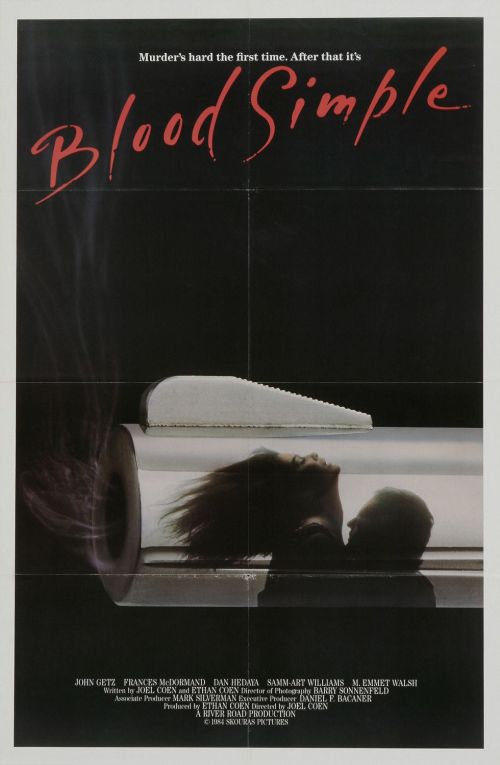 Julian (Dan Hedaya) is a jealous and controlling husband who suspects that his wife Abby (Frances McDormand) is cheating on him. He hires a sleazy private detective named Loren (M. Emmet Walsh) to follow her around only for Julian to ultimately learn, to his shock, that not only is she fooling around, but it is with Ray (John Getz) who is one of his employees. Filled with rage Julian then asks the detective if he’d be willing to kill both of them for a price. Loren says he will, but then fakes the murder simply so he can collect the cash, which then leads to a myriad of twists.

This marks the Coen brother’s feature film debut and I was surprised to learn that every major studio passed on it and it wasn’t released to theaters until it got a favorable response after being screened at the Toronto Film Festival. The film is filled with the directorial flair that we’ve become accustomed to in their movies. I particularly enjoyed the inventive camerawork with my favorite shot being a tracking one done down a bar top in which the camera somehow leaps over a drunk’s head. The opening shots showing the desolate, dry and heat soaked Texas landscape helps give the film a gritty flair and the brief, clip-like dialogue that seems more like sound bites is quite interesting and helps reveal more by what the characters don’t say than by what they do.

McDormand is terrific in her film debut and her angelic-looking blue eyes help make her character more appealing to the viewer while the rest of them come off as being pretty vile. I was also impressed with how her Texas accent here sounds just as effective as the Minnesota one that she did in Fargo.

Hedaya does well playing the type of part he’s become best known for and I’ll give him credit for allowing himself to be put into a hole and having dirt thrown on him, but when he gets shot it is clear that his eye lids are fluttering and chest moving up and down, which should’ve been equally obvious to his shooter as well.

The story is slick, but the character’s actions not so much. Both Julian and the detective sneak into Ray’s house, but park their cars, which have very distinctive features, right in front of the home in which any neighbor looking out their window could report seeing it later when speaking to the police. Ray’s actions are even dumber as he gets fingerprints all over the murder weapon and then foolishly carries a dead body into his car where it doesn’t take a genius to know that the victim’s blood will most likely seep all over his backseat cushions.

The story appears to take place in the summer as the daytime scenes show the characters sweating, but then at nighttime we see the character’s breath, which makes it seem more like a winter time setting. I also thought the viewer should’ve been shown how the detective was able to doctor the photos to make it look like Abby and Ray had been shot as this was well before the age of personal computers or photo cropping.

There is another scene near the end where Abby, in an effort to escape from her killer, climbs out of her bedroom window and into a neighboring room. However, there was no ledge for her to climb onto making it almost impossible for her to do what she did, which is why I think they didn’t even attempt to show it and was simply something that we are expected to ‘forgive’ in order to enjoy the rest of the movie.

Despite these minor flaws I still found it to be an inventive film and one of the better attempts at creating a modern-day film noir that should be considered the standard for all others that followed.